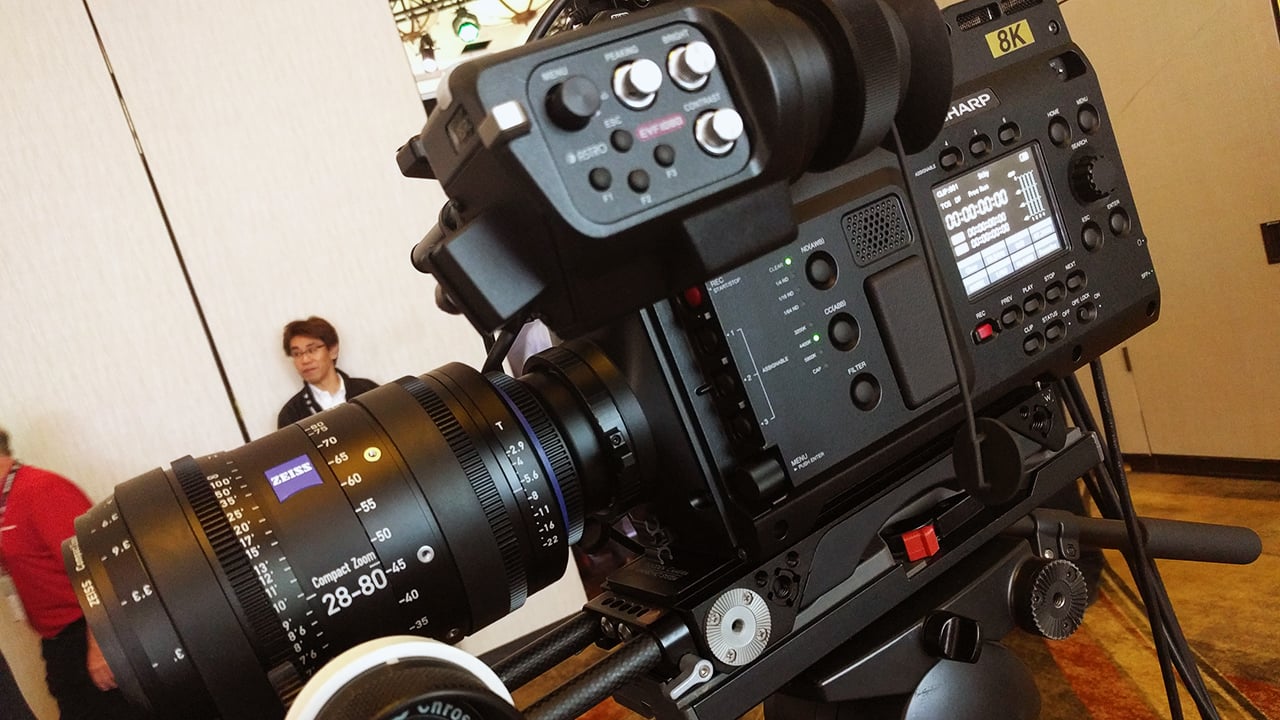 Sharp is helping lead the charge towards 8K

What is Sharp's new 8K camera like in the flesh? Phil Rhodes left on a jet plane, knew exactly when he'd be back again, and went to Phoenix, Arizona to find out!

Sharp is not a company recently known for making cameras. It’s more usually associated with things we might call output devices - printers, copiers - which are essentially an expression of modern mechatronics. Now, though, it’s showing an 8K camera, which raises two interesting questions: first and most obviously, how good is it, and second, why would a company the size of Sharp choose to get involved in such a specialist market in which they haven’t previously operated.

What’s certainly true is that Sharp, which has not been known for broadcast cameras, is promoting an 8K camera and an 8K display at their dealer meeting in Phoenix, Arizona, to which we were invited. (Travel and lunch was supplied; this article has not been vetted by the company.)

The tersely-named 8C-B60A is shaped like a slightly oversized docking camera from back in the day when cameras and recorders could be split in two. It's just about long enough to have the VCT-14U quick-release plate underneath and therefore a shoulder pad, and it's light enough (maybe 25 pounds, with a short zoom) to handhold. Sharp has not gone off-piste in terms of the industrial design and that's no bad thing.

Closer inspection reveals a PL lens mount in front of a single super-35mm sensor. This contrasts with the Sony 8K broadcast camera shown at IBC, which is a three-chip design. This approach keeps things reasonably compact, permits the easy use of lenses designed for super-35mm sensors, and reduces costs. The viewfinder is a preexisting 1080-line type from Astrodesign, a company in which Sharp has recently taken an interest. 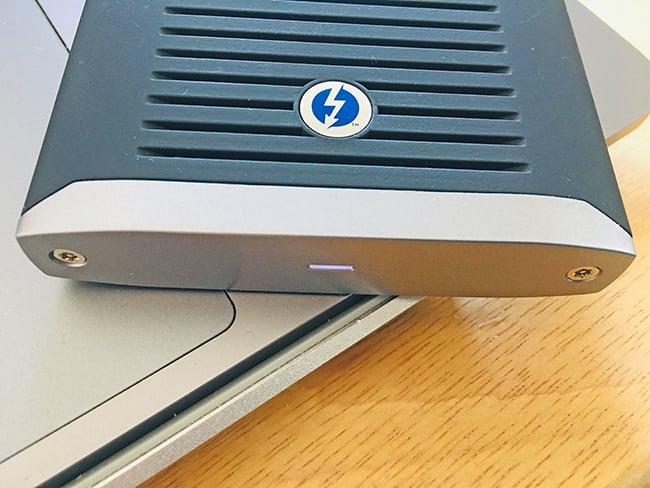 Apparently, much of the electronic design of the camera comes from Astro, a company which has, to date, been known mainly for digital video test and measurement devices. Sharp representatives are cagier about the origin of the sensor, perhaps understandably, but Astro's involvement makes a lot of sense. It has a lot of experience in digital signal processing, something that's particularly relevant when dealing with a 33-megapixel sensor capable of 60 frames per second.

What makes Sharp's camera unique is that it's the only device in the world capable of use both as a broadcast camera with uncompressed output, and as a camcorder with onboard storage. The storage device is a two-terabyte flash magazine capable of holding around 44 minutes of footage at the 6Gbps compression ratio used by the camera when operating at 60 frames. 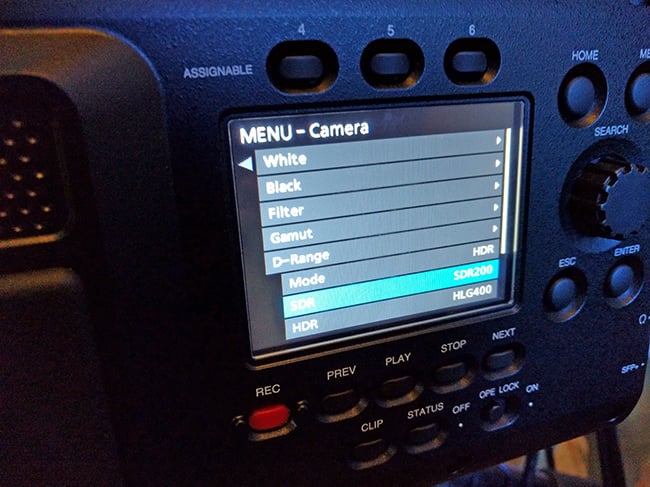 Storage is in the HQX codec promoted by Grass Valley. The HQX whitepaper confirms that it's a block transform codec like ProRes or DNxHD, although it doesn't go into details as to what algorithm (DCT, wavelet, etc) is used to transform those blocks. The paper does show HQX performing very similarly to ProRes and DNxHD (albeit often slightly outperforming them) so we might assume it's a an optimised DCT codec, but we can't really know. Currently, as far as we know, it's supported only by Edius, with discussion in progress as to support on other platforms, and Astro makes the offload stations for the two-terabyte flash packs.

The displayed camera was, we're told, not final, though it already has support for HDR modes targeting displays capable of various brightness levels. There is not currently a log output mode and what's being recorded will be whatever's being monitored. There's a 1080p monitoring and viewfinder output. Power consumption is high, at around 100 watts, but that's to be expected in the context of building a camera with a 33-megapixel sensor and debayering it in realtime at 60 frames per second. That's a lot of electronics. 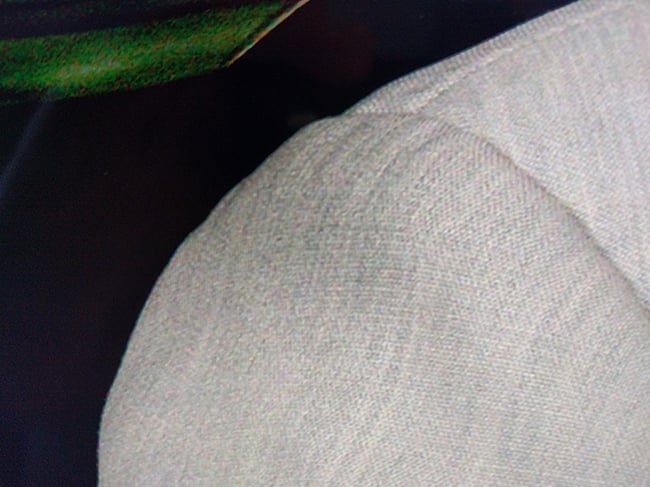 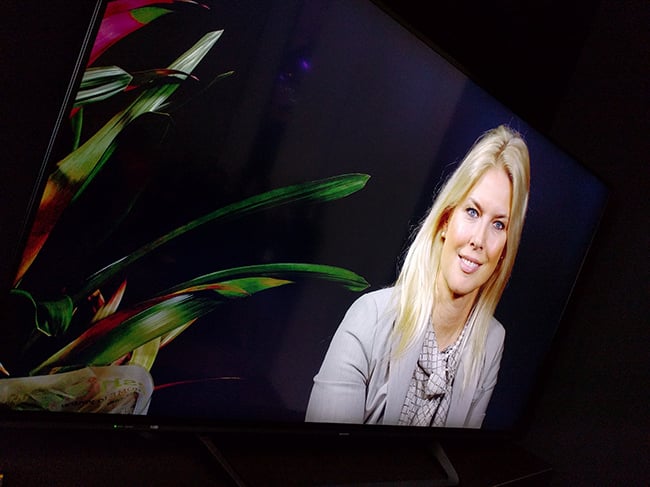 Pictures on the new 70-inch TFT-LCD display look fairly conventional at standard viewing distances, where the screen fills the normal proportion of a human visual field. Moving in reveals, as we might expect, a lot of very fine detail; you can sit very, very close to this display without noticing a loss of sharpness. 8K on a 70-inch display has the same pixel density as 4K on a 35-inch display, and we’ve commented in the past that thirty-plus inches is a minimum for 4K to be really useful. Consider it a TV that can be viewed as close-up as a computer monitor.

Ultimately, though, Sharp is quite upfront about the fact that there’s not much point in distributing 8K to the home because people don’t habitually sit that close, and the primary purpose of all those pixels is to scale and window-in to satisfy a lower-resolution deliverable. There’s always something to be said for originating at a higher resolution than we distribute, too, and it would be perfectly ok to shoot 8K for a 4K finish and be able to perform stabilisation and reframing without visible loss. More is more, at some point.

Again, colorimetry isn't final, but right now it isn't the quietest camera in the world. We might expect that, given the high pixel count on a relatively small chip. As a broadcast-targeted camera, sensitivity is expressed in terms of gain above unity, so it's difficult to give an ISO sensitivity. Narratively, the camera achieved reasonable exposure of a subject ten feet from three Litepanels at f/8. On that subject - Sharp has shown the camera with a Canon 17-120mm zoom, but the display included Sigma primes, which are apparently liked for their sharpness - and it's a camera that demands a lot of sharpness. 33 megapixels is a lot for a DSLR, let alone a moving image camera.

Sharp's wider idea seems to be that this camera, and the accompanying 8K TFT-LCD display, will form a sort of jumping-off point for the future development of an 8K ecosystem. Currently the camera has four 12-gigabit SDI channels, outputting the 8K picture in two-sample interleaved format. Displaying it on the 8K TFT-LCD requires conversion to a square divison format (where each link carries one quarter of the image.) That conversion is one example of the sort of device that Sharp seems to be interested in doing - the tools, the bits and pieces that make these things usable.

Sharp probably isn't expecting orders for thousands of these cameras. RIght now it lacks the CCU integration to be a drop-in replacement for lower-resolution broadcast cameras, but that is presumably mainly a firmware concern. The company seems more interested in sports and even things like medicine, where remote medical consultations could use all that extra resolution to allow zooming and cropping on the receiver end. The idea of broadcasting 8K pictures to allow a user on a smartphone to pinch and zoom around a sports field is an interesting one, too. It's intrinsically a very speculative product, but that sort of speculation has an aspect of daring that's good to see. It's easy to find reasons not to do these things. Sharp found a reason to do it, and that's interesting in itself.