"The Canon C200 has no equal at its size and price"

The Canon C200 makes for a very viable cinema camera

The best way to find out a camera's flaws is to use it on a fully fledged shoot. And you can't get a much better testing ground than with -15 degree temperatures while filming a commercial for one of the worlds most prestigious car makers. Brett Danton writes about his experiences with the C200 and why he thinks it's the best camera for the price.

I recently wrote an article about the Canon C200 and why I think it is a camera that is misunderstood for its capabilities and specifications. Since then I have used the C200 shooting a Jaguar F-Pace commercial nearly twelve thousand miles away in the mountains of New Zealand with very little back up or support, similar to my previous shoot earlier in the year on the C700. For me the C200 is an entry level RAW camera which offers a small form factor, internal RAW recording, maximum image quality and ultimate flexibility in post. It is an accomplished camera for drone and gimbal work, which is only enhanced by using the dual pixel autofocus inside the camera. It is also an excellent companion camera to the C700 as it shares the same sensor as its big brother, records onto C-fast cards, and records RAW internally, which allows you to cut and grade images between the two cameras.

For this commercial shoot I wanted to move quickly as we had to shoot in multiple locations over a two day period. In fact we covered over four hundred miles in snow, rain, fog and sunlight, which only increased our challenges. Over the two days we experienced temperatures as low as minus 15 degrees with the wind chill factor, and I must say that the camera didn’t skip a heartbeat. Often the camera was dripping with moisture and then working in freezing conditions, and it still continued to perform well. When we did see some sunlight we experienced very harsh and unforgiving light, with blue skies and glare from the snow. We shot everything with the available light and did not use a reflector to produce the images 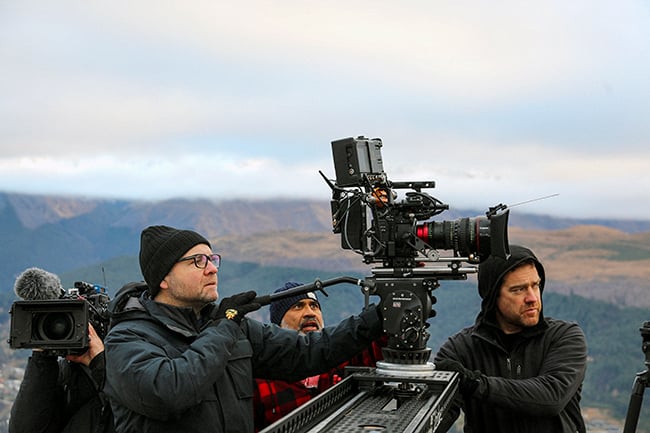 The Canon C200 on location during the Jaguar F-Pace shoot

On the shoot itself we used two C200’s – one on a movi for the drone and the other was mounted for both shoulder and tripod work. We also used the new Arri prototype C200 grip which also works alongside the C700 Arri kits. The grips also allow you to mount one of the best EVF’s on the market the EVF- V70, or the Canon touch screen. Bright Tangerine provided us with a follow focus and matt boxes, which we used on the Canon CINE glass throughout the shoot.  We used manual focus for everything because we were using the Canon CINE lenses, but the focus guide proved to be a very useful tool in and checking the focus and working with a fast travelling car.

Out of the box settings

The camera was used on its out of the box settings. We mainly shot at ISO 800, changing between 25fps and 50fps. We also shot everything using the RAW workflow. We did this because we could then choose in post if we wanted to use Canon Log 2 or Log 3 on any of the shots, which allowed us maximum flexibility in post-production. Using RAW was also useful because changing weather conditions, limited timings and changes in script meant that we were able to use multiple shots to compile some scenes and use VFX, which we could have only achieved with the RAW workflow. One of the multiple comp images was due to the weather and was eventually shot in full sunlight and then a second after the sun went down (where the light was flat beyond belief!). You would never know the final scene was shot like this, and shooting in RAW meant that we were able to save thousands of pounds on the shoot as we didn’t have to re-shoot it. If you watch the BTS video you will see the areas I am talking about as we actually covered the green screen with the C700. But the C200 did a better job than we were expecting in covering this scene.

On location, in order to monitor in HDR we used a LUT on the EVF and Atomos shogun HDR monitors. In order to view the images around set we used Teradek BOLT receivers on the drone and monitors, and also one of the first SERV PRO units which I was very impressed with and will be talking more about soon.

The post path was also made simple, as the footage was dual recorded to C-fast cards for both the RAW files, and MP4 for the proxy files matched with a REC709 LUT. We were then able to upload the footage and smaller files to FRAME.IO in New Zealand, and the editors could then immediately start working in Premier CC 2017 prior to us returning from the shoot (before working on the RAW files at a later date). Post production was carried out at GPS studios in Soho, with the colour grading being done in Base Light and then finished in Flame. Here we also graded the RAW footage from the C200 alongside the C700 where you could see the consistency in the Canon colour science and see the extent to which the two images differed. The car we had used during the shoot was dark grey, and it is in the post production path that you can really see strength of the Canon images. 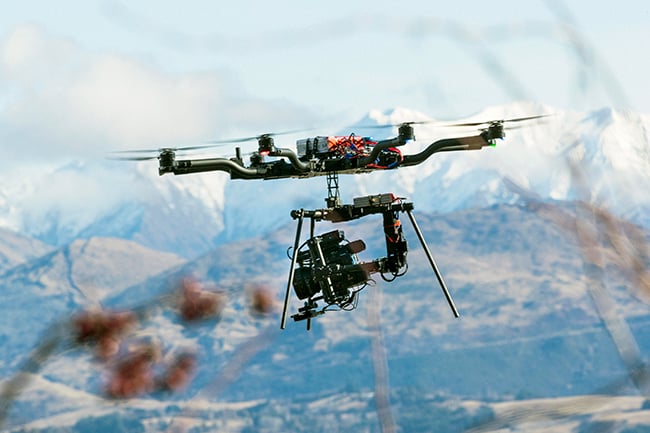 The C200's size and weight makes it idea for drone use

Over the next few weeks we will be re-grading the footage in HDR with Dolby Vision. Having been to a brief viewing last week in HDR I immediately felt like I was back on location because the images had so much depth and colour.

I think the imagery from this camera speaks for itself and overall it fits nicely into the Canon family of Cinema Cameras. The family of Cinema EOS cameras come with a great degree of familiarity as all of the major controls are in similar places, such as the ND filters, which make them easy to use. Also the ability to use accessories like the EVF across the C200, C300 Mark II and the C700 gives you flexibility and familiarity, which is very important in creating a visual reference point. I have had different cameras with different EVF’s on the same set before, and it becomes hard to judge between each in terms of monitoring images and referencing a look. Despite having the C700 on set and thinking we would use that a lot for the final 60 second advert, we only had one shot from the C700. The two are very different cameras targeted at very different markets, but this production suited the size, flexibility and imagery that the C200 could produce. It has the Canon build quality and colour science that Canon are renowned for and I would not hesitate to recommend this as a cinema camera having used one. Watch the BTS and see what we put the camera through. I cannot think of another camera that can capture 4k RAW imagery internally at up to 50fps with the same form factor and price in the market. This camera offers images previously requiring more expensive cameras to work in RAW workflows all the way to a cinema finish.

Tell us what you think, and watch the final commercial below.