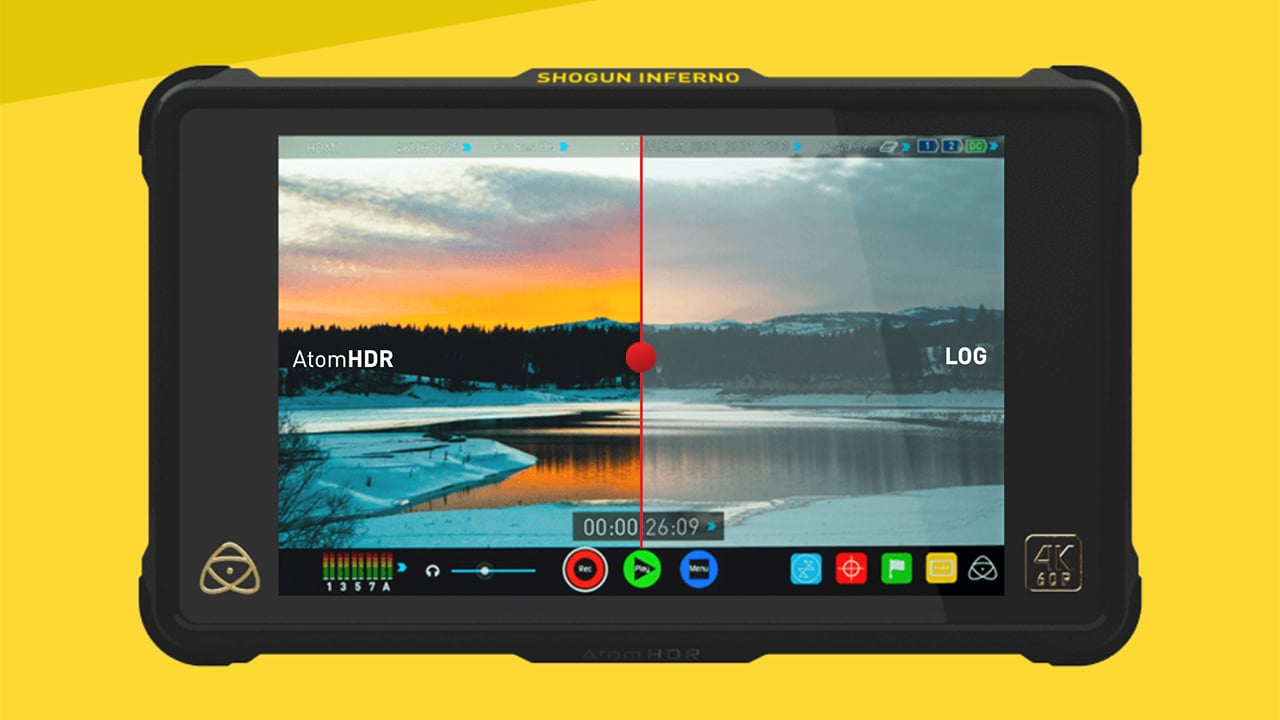 The latest firmware update from Atomos promises to make HDR workflows smoother as well as increasing the capabilities of its Ninja Inferno and Shogun recorders across the board.

Anyone who has dealt with HDR knows that the workflow from end-to-end can throw up complexities that were unheard of in the days of Rec.709. While much of the NLE software available needs to mature and increase in capability when it comes to dealing with issues and delivery, Atomos has been working hard to make HDR production as easy as possible.

The company has now released version 8.4 of its AtomOS firmware for the Ninja Inferno and Shogun recorders.The full press release follows on the next page, but highlights of the new release include:-

The new additions should help ease and enhance the workflow for those wanting to take advantage of HDR capabilities in cameras that support the HLG format, but that would ordinarily record to much more compressed codecs. HLG is clear to be a standard feature on most future cameras, and so this will help to keep the Atomos recorders ahead of the curve.

The full press release from Atomos follows on the next page.

Atomos have today announced a comprehensive free firmware update for their Shogun Inferno and Ninja Inferno 4K monitor/recorders which enables stunning new features and adds significant value for owners. The AtomOS 8.4 firmware release brings key features that make capturing and delivering in HDR as seamless as in standard dynamic range (SDR). It also brings 2K 240fps Raw-to-ProRes and 4K 12-bit CDNG Raw recording to the Panasonic Varicam LT, when coupled with the Shogun Inferno. This adds to the existing Raw support for several Sony and Canon cinema cameras, as well as improving support and enhancements for many more cameras.

The Hybrid Log-Gamma (HLG) HDR output of cameras like the Sony FS5, Z150 and Panasonic GH5 can now be recorded directly to the Inferno series recorders with the correct metadata flags embedded into the Apple ProRes or Avid DNxHR .MOV files. With this metadata the recorded clips can be used seamlessly in an end-to-end HLG workflow, just like Rec709! These HLG clips can be natively edited in NLEs that support HLG, or uploaded directly to YouTube HDR in HLG to be seamlessly played back on any SDR TV for stunning improvements using the current SDR infrastructure. This is achieved with the metadata flag from the Atomos recording following the file through the NLE, then on through to YouTube HDR upload. Finally, it is then played out from HDR supported devices like the Google’s ChromeCast Ultra and Amazon’s Fire TV with 4K Ultra over HDMI correctly to any SDR or HDR TV! - Atomos makes it simple to produce HDR in HLG today.

For both HLG and PQ formats, the HDR info frames detected on HDMI input can be used to automatically set the gamut and gamma of the Shogun or Ninja Inferno’s own display, making the user experience of shooting in HDR seamless. The HDMI output will also transmit the correct HDR info on loop out to other devices downstream. There is also the useful option to convert regular camera Log inputs from a wide range of cameras to display in HDR using either PQ or HLG, with a choice of output colour gamut – great if you want to connect a HDR TV in the chain.

“Our goal at Atomos has always been to bring the most up-to-date technology through new efficient ways to work. This gives every video professional more time for creativity,” said CEO Jeromy Young.

“Getting HDR to screen used to be a complex task that required specialist knowledge. With our latest enhancements, the process of monitoring, viewing, recording and delivering HDR is now simple and straightforward for the first time. I’m sure users will be stunned with the results, especially to standard SDR TVs with HLG.”

HDR flag support is also especially useful in the growing field of HDR video games capture from consoles like the PS4 Pro and the upcoming Xbox One X. These flick between different modes depending on the game (SDR or HDR) and the recorded files on the Atomos recorders in 4Kp60 will follow the changes so your footage always looks amazing!

The AtomOS 8.4 release also allows owners of the Shogun Inferno to use the Panasonic Varicam LT to create gorgeous slow motion footage in 2K at up to 240 fps, direct from the Raw output of the camera. A Shogun Inferno running the firmware also brings 4K 12-bit Raw to CDNG shooting at up to 30 fps and 2K 10-bit Raw to CDNG at 100 and 120 fps. The quality of this footage is astounding and makes the Varicam LT / Shogun Inferno combination a fantastic state-of-the-art choice for Raw and high speed, but without the costly media, licences, or proprietary Raw recorders that are usually associated.

Young added: “I’m delighted with what Panasonic and Atomos have achieved working together. The Varicam LT and Shogun Inferno was already a great combination, but the enhanced feature set of AtomOS 8.4 with 240fps brings you a new camera performance standard at the same price. Giving this firmware away for free, not as a paid upgrade, is part of the ongoing Atomos commitment to our loyal customers and to modern technology that keeps on giving.”

The advances that AtomOS 8.4 brings to the Varicam LT mirror similar Raw recording options that the Shogun Inferno already offers for the Sony FS700, FS5 (with CBKZ-FS5RIF Upgrade) and FS7 (with XDCA-FS7 expansion pack). With 12G SDI and Quadlink 3G-SDI connectivity also supported, the Shogun Inferno is a truly versatile machine. This wide compatibility makes it the obvious choice for professional on-camera monitoring and recording. Better still, unlike rival makers, Atomos don’t charge for any of these options.

Users of RED DSMC2 cameras will benefit from the updated support of the IPP2 pipeline. Inferno monitor/recorders can now be set to display the output of the camera or footage shot using the Log3G10 curve with REDWideGamutRGB.

Analogue audio embedding is now supported on loop through, making the Infernos great gaming recorders, perfect for developers and others recording live game play up to 4Kp60 in amazing 10-bit quality.