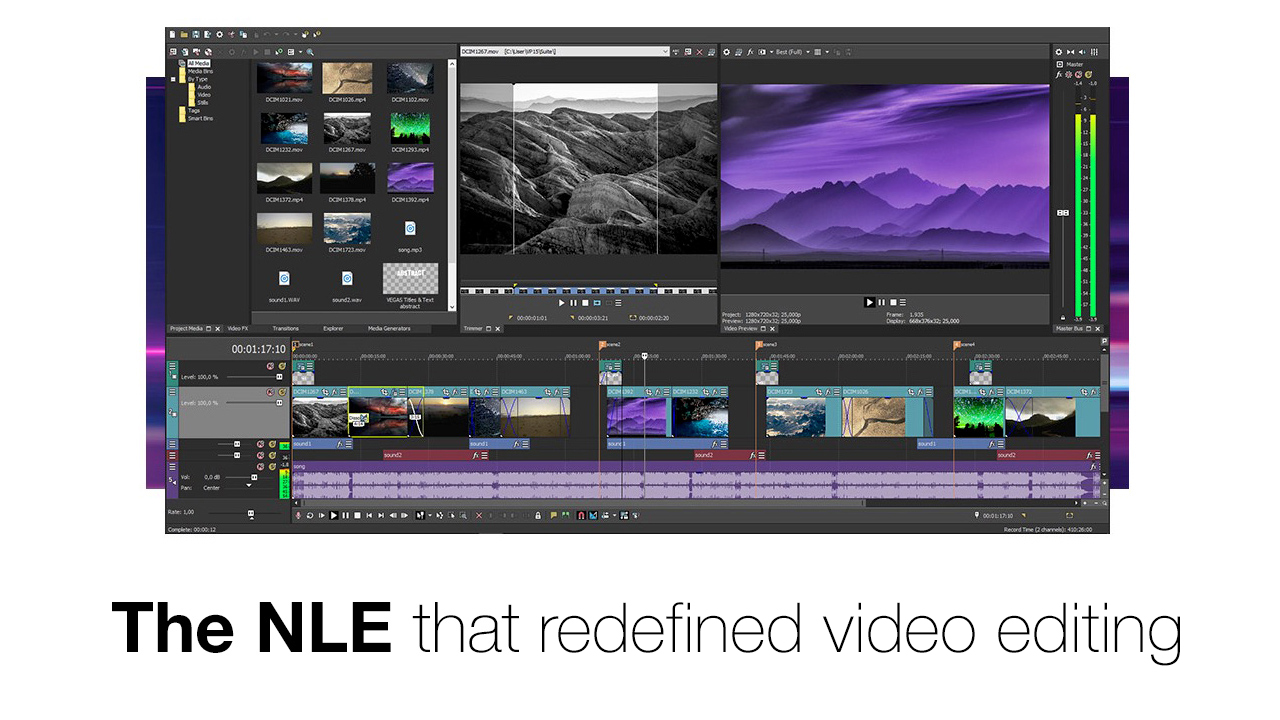 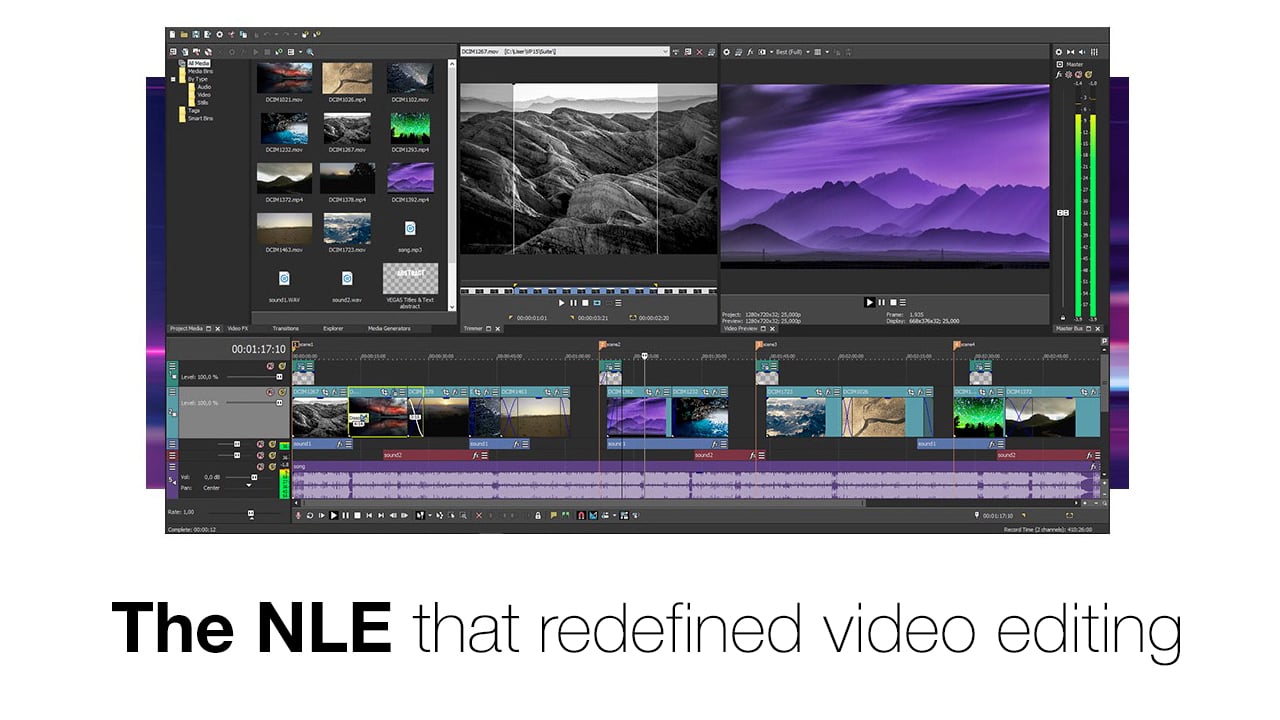 For many it is the best NLE that ever existed. For years it lead the way with innovative features, and arguably it could even have influenced the design of FCP X with its elimination of the source/record style interface. It is of course Vegas Pro. Michael Bryant takes us through the origins of this unique, and popular software.

Me: “Hey, have you checked out Vegas Pro?”

Me: “No, no, I mean the video editing software.”

Them: “Oh, yeah, some of my friends use that and just rave about it. They tell me it’s a well-kept industry secret. Why’d they call it Vegas Pro?”

And then I would launch into the same story I had to tell over and over again for years to explain the backstory behind the name. I agree video editing, audio production and DVD/Blu-ray authoring are not the first things that come to mind when you hear Vegas Pro. But that’s what it does and that’s the name we ended up with and here’s why.

Vegas was the code name the developers used when referring to this new secret project they were working on in a little funky building on the corner of Willy (Williamson) and Livingston in Madison Wisconsin. Candy Factory; that’s what it said on the side of the building. And to a guy like me, musician and audio dude who was eager to get my hands on some cool new software like Sound Forge and ACID Pro, that’s exactly what it was, a creativity candy factory. Apparently, somewhere in the past, that building actually was a candy factory, but now it housed a bunch of very creative, very energetic young kids who were out to turn the production world upside down with some crazy new ideas on how to make music and video… with just a computer! No external gear needed. Do you have a PC? You can use these tools. That was one of their prime directives. Make it work and work well on the hardware available to the average Joe or Josee. So, why name it Vegas? It was something to aim for, a target.

Sonic Foundry — that’s the outfit that was building this beautiful tool — had just won best marketing at a traed show in Las Vegas called COMDEX (Computer Dealer’s Exhibition, soon to morph into CES, Computer Electronic Show) for the first release of ACID Pro. That was a big deal. This small 40 member company ( I was employee #40) beat out giants like Microsoft, Adobe, and AVID. They were riding high. Then there was a company, also in Las Vegas, that at the time was also creating a multitrack audio program and Curt Palmer, CTO at the time, had set them as a target to best. When it was time to pick a name, the marketing team went to their PR agency with a list of potential names for their opinion. The agency asked…. “What is the code name? Vegas? Cool! That’s it! You did so well with ACID and that was a code name. Let’s repeat that success.” So, the name stuck. And I’ve spent years explaining it. Now you might ask: “How’d you come up with a name like ACID for some music creation software?" Next time you see me, buy me a pint and I’ll run that one down for you.

Although under the hood and behind the curtains Vegas Pro was being built as a video editor, its first incarnation was as a multitrack audio recorder, editor, mixer. And it still excels at those functions today. I don’t know any other video editing software that will enable you to do a multi-track recording, mix the tracks, master the tracks, sequence the tracks for CD, burn a Red Book standard disc-at-once audio CD and print out the PQ list and pass it all off to the CD replicator for mass production without using any other piece of hardware or software. I probably use it more for audio work than I do for video work to this day. It’s crazy fast and easy. This probably explains why musicians find Vegas Pro so intuitive and easy to use when they finally get around to working with video. It fits the way they think.

So, Vegas Pro went out the door as an audio multitrack but the video tools were lurking in the dark under the audio ones and zeros. One night, my friend Gary Rebholz, also an employee at Sonic Foundry, and I talked one of the engineers into letting us in on the secret keystrokes that would turn on the video side of things. Neither one of us ever having used a video editor before began to explore. We ran around the building shooting some crazy shots and even ran outside and shot the train going by with no end goal in sight. Then we grabbed a couple of other friends and fellow employees (the majority of the people working at Sonic Foundry at the time were musicians) Rick Hoefling and Mark Seigenthaler.

I fired up ACID Pro and made a music bed. Then dropped the ACID tracks into Vegas Pro and recorded Mark playing keyboards and Rick overdubbing on lead guitar and sax. Then the fun really started. Gary and I turned on the hidden video features and dragged our shots to the timeline. No instructions or help files yet. It was late at night so there was no one around to tell us how it worked and no manual. We just dove in and boom, an hour or so later we had made the first music video (or any kind of video for that matter) using Vegas Pro. That’s how brilliant and easy these guys had made this software. Remember back to the first time you tried using a video editor. Think you could have turned out a finished video in an hour with no help or instructions?

Of course, not all the features were working and a lot more would come online before the app hit the streets, but it was working and what’s more, it was a fun environment to work in. My enthusiasm was cranked and I was anxious to tell the world about it.

What gets me is how innovative it was. It took some of its competitors a decade or more to catch up with core features that were found in version one! Timeline editing, format agnostic performance and auto crossfades are just a few examples. Let’s have a quick look at just a few of the features that Vegas Pro introduced over the years before anyone else — or at least led the pack — with these innovations:

These are not all the features of Vegas Pro and, of course, not all of these were in version one. But these are, in my opinion, the ones that broke new ground and led the pack in making editing faster and easier. It’s an impressive list.

The Vegas Pro team continued to invent under the direction of Monty Schmidt and Curt Palmer until Sony bought the technology in 2003. A large portion of the team that did all that inventing moved over to Sony so the development hardly missed a beat. Early on, Sony pretty much left the team alone to develop what they thought was important and Vegas Pro grew even stronger.

Then there was a change in upper management and they began to get more involved in decisions about the direction of the development and, again in my opinion, that took a toll. I never got the impression that they understood exactly who our core customer was and, even more important, what they needed. Consequently, resources were redirected to features that really didn’t help the core customer. A few versions were delivered that did not hit the mark for many of the loyal followers. But there is hope!

Magix, a company famous as creators of user-friendly multimedia software for over thirty years, purchased Vegas Pro and several other software titles from Sony in the spring of 2016. I was excited to see the release of version 15. I’ll have to go back and add — the most flexible UI the industry has ever seen to my list of firsts. I’m very happy to see Magix step up to take Vegas Pro into the future. They get software and know the people who use it, what they need. From what I can tell, they appear to be committed to staying on this path of innovation. I know the guys on the Vegas Pro team (still based in Madison Wisconsin) and they’re good. Expect them to carry on the tradition of crafting an application that makes the job of editing audio and video… fun.