NHK normalises 8K in the Future Zone at IBC 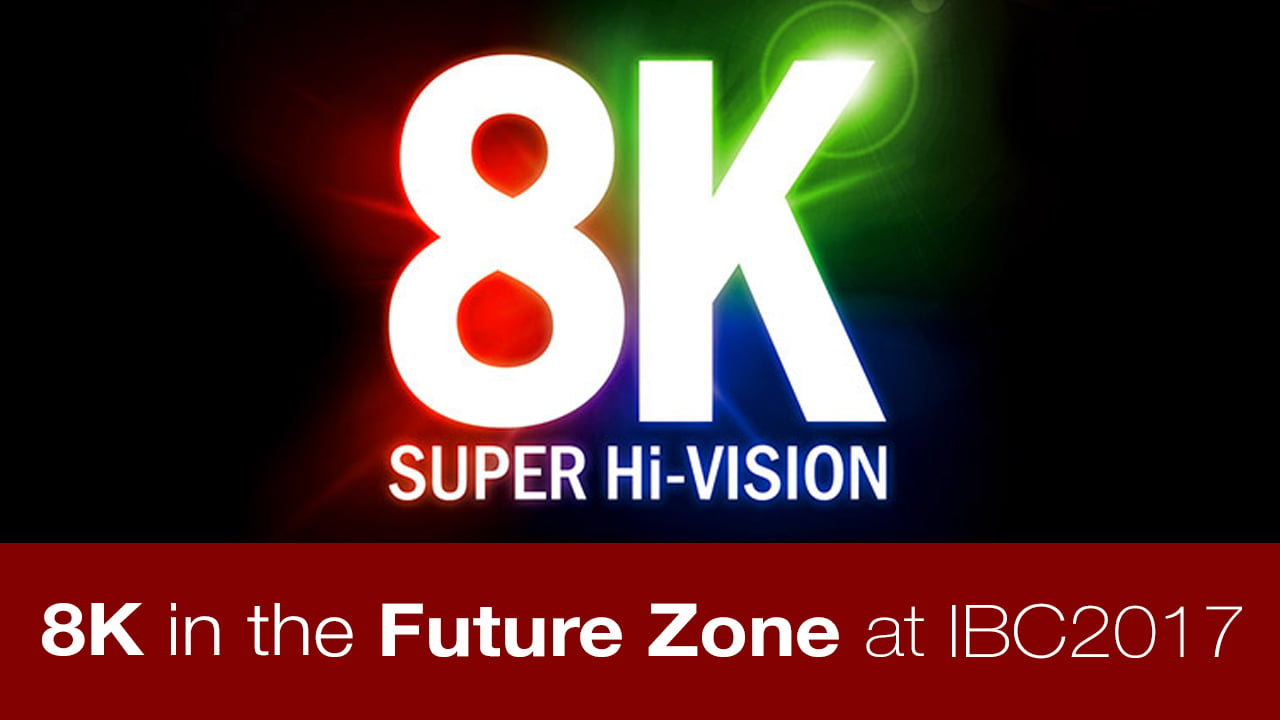 8K broadcasting from NHK has become a familiar part of recent IBC shows but this year there’s been a step change in the systems built around it. Perhaps it's no surprise that it plans to transmit in the Super-Hi Vision format in Japan later next year. Nonetheless, it is worth checking the pulse. A sixteen times HD resolution revolution is no longer the future – this is happening.

NHK has extended the nuts and bolts of production to distribution in the format. A centrepiece is the 8K systems camera co-developed with Sony and on the exhibition floor, as well the Future Zone but alongside this NHK has accelerated the development and installation of 8K kit for a regular broadcast service.

Compression is essential for the massive bit rates of 8K (which by the way in Super Hi-Vision includes wide color gamut and HDR). For this it is working with TICO, the same technology favoured by many vendors in moving HD and 4K around for live production. Using a TICO 8K codec the bitrate of an uncompressed 8K stream is reduced to 48 Gb/s (60hz, 10 bit, 4:2:2) making it possible to squeeze a 8K signal down a single 12G SDI cable with a claimed latency of less than 0.2 milliseconds. 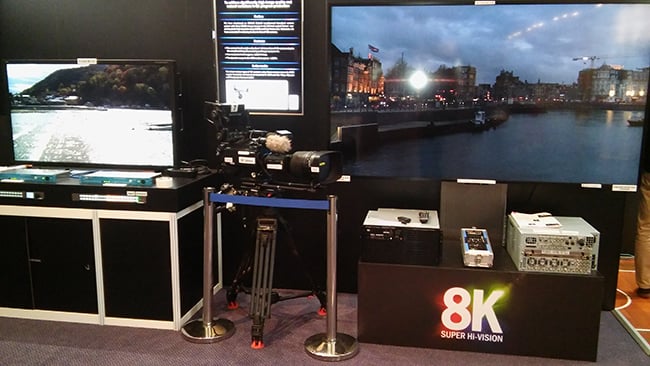 “TICO would benefit from a IP interface and we are currently focussed on its standardisation,” says NHK. “On the other hand, we are continuing to consider a reasonable interface for 8k production among SDI.”

Company co-founder and CTO Jan Weigner declares, “Daniel2 can decode up to 1100 frames per second at 8K, or 7680x4320 pixels to be precise, - translating into more than 17000 frames of full HD decoded per second. It is the world fastest professional video codec, leaving any other codec light years behind.”
Cinegy is already touting the performance at 16K of this technology.

For future 8K displays, NHK says it is researching an ‘ultraflexible large area OLED’ using a special plastic substrate. Conventional OLEDs “are generally unstable because of the penetration of oxygen and moisture”, it says. Its novel OLED will have higher stability and will be as thin as a sheet. That’s important because the idea is to show 8K content like live soccer on seriously giant displays in the home over 130 inches by arranging 4x 65-inch panels. The panels on show at IBC have a refresh rate of 120hz. Such fast frame rates are essential to ease motion blur at high resolutions. 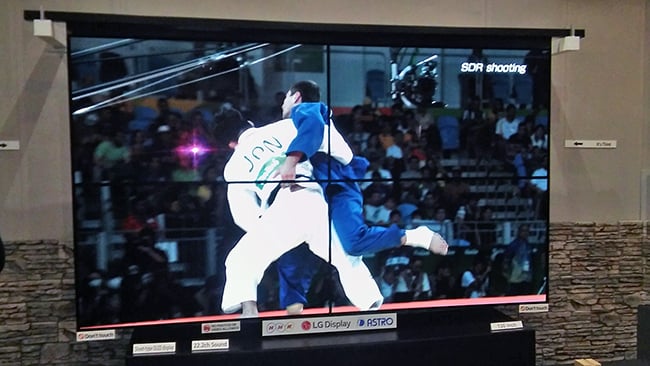 The pictures on display in the NHK booth – of international soccer – are as impressively detailed as always but I’ve always found the image strangely alienating, perhaps because it is shorn of the usual presentational wrapper of commentary, graphics and most importantly switching between angles and close-ups to wide shots. It may be that to appreciate 8K the industry needs to design new visual and audio grammar and consumers will have retune ourselves to watch it.

More from NHK: It’s creating a graphics system for use in live sports, presumably in 8K, which triangulates the position of objects in realtime using machine learning. This features a calibration technique for multiple pan tilt zoom cameras and serves CG compositions of an object’s trajectory.

It is also demonstrating something called Hybridcast Connect X – a platform for connecting the wider broadcast experience with other devices including tablets but also Internet of Things devices, primed for when the smart home take-off.

The Tokyo Games in 2020 provides a handy target for Japan’s 8K prowess but it’s the Winter Games in South Korea next February which is going to provide an arguably greater leap in media.

Representatives from host city Pyeongchang were in the IBC Future Zone talking up their plans to wow spectators with the largest public trial of next-gen mobile network 5G to date. This will enable 4K UHD coverage to mobile devices specially outfitted for the occasion as well as a choice of ‘Omni point of view’, ‘Sync View’, ‘Time Slice’ and ‘Holograms’ of live Olympics action. Only select spectators to the event will be able to play around with this though.

The organising committee is also laying on a VR ski-jump experience and a game of curling where visitors can pit their skills against an artificially intelligent robot.
Elsewhere in the Future Zone, there is a holographic display of sharks (pretty rudimentary to my eye) from Dutch firm Novaline using Panasonic projectors; and Vision III, a Virginia-based outfit, uses Parallax Visualization technologies – a technique used by birds apparently - to insert different views of an object or scene to add depth and dimension to content. This is done as part of production and works best when the object – a drinks can or logo say – appears to overlap the black frame of the screen. No special glasses needed.

The BBC continue to plug object-based broadcasting, a concept which treats media as a set of objects and uses metadata to describe the relationships between them. The idea is that this will lead to greater personalization and immersion.

The most advanced research into the area is in audio. With nine partners including Germany’s Magix Software, French researchers BCOM, Fraunhofer IIS and Munich research body IRT, BBC R&D is part of the Orpheus project which is working to build a object-based audio broadcast system from production to play-out and reception.

In July, Orpheus produced a pilot radio drama called The Mermaid’s Tears at the BBC. Through an app or a web browser, the listener can choose to follow any one of three characters, who move between different rooms. Depending on the listener’s choice, the story will unfold from a different perspective compared to other listeners who made different choices. In addition, the listening experience is enhanced by immersive 3D sound, and by images that are triggered at different times.