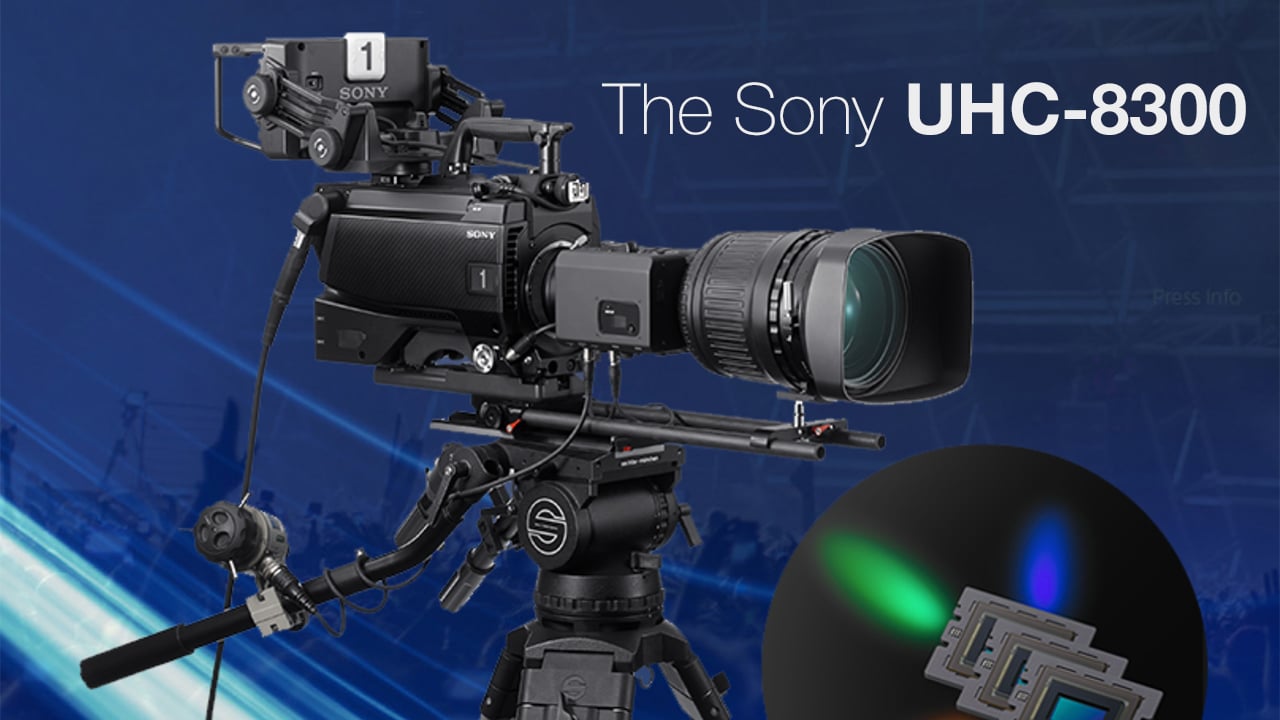 RedShark at IBC 2017: While the primary attention has been reserved for Sony's high-powered Venice camera, which had its European unveiling at IBC earlier today, there's something else going on which is, technologically, at least as interesting. The UHC-8300.

The UHC-8300 is an 8K broadcast camera. That in itself isn't massively new - there was some 8K coverage of the 2012 Olympics, although the equipment used for it could perhaps be described as a bit experimental, with a clutch of SDI connectors on the back which each carry a rectangular chunk of the picture. The HDC-8300 is connected to its camera control unit (CCU) using fibre optics, which isn't particularly unusual in 2017 but is probably the only reasonable way to handle such a bandwidth behemoth.

Also, to date, most 8K cameras have had fairly large sensors, which makes focus difficult in exactly the sort of situations where this sort of technology is intended to be deployed. Putting that many pixels (photosites, really) on a single chip requires that the single chip involved be fairly large, otherwise the individual elements will barely be big enough to catch any photons and the resulting images risk being noisy. 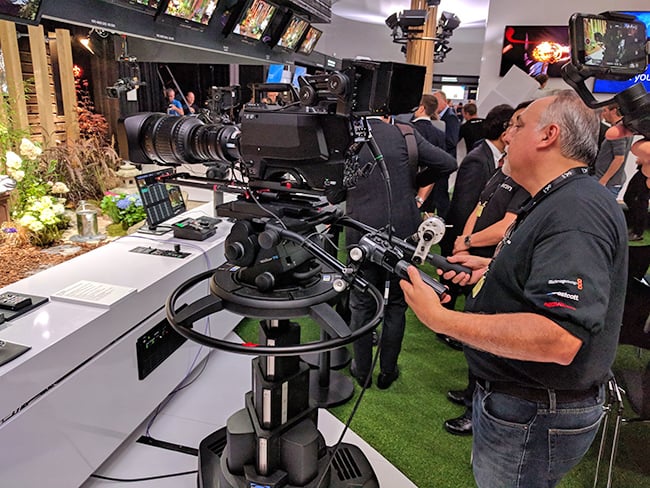 Sony's solution to this is eminently sensible: the UHC-8300 is a three-chip camera in the traditional sense, using three monochrome imagers mounted on an optical colour splitter block. This means that each sensor only needs to record the light for one of the red, green or blue channels, the pixels can be larger and as a result the camera is more sensitive and enjoys higher dynamic range, while keeping the sensors small enough for manageable depth of field.

This entails quite a bit of engineering. Not only are sensors of that resolution generally quite hard to make, with a lot of rejects, but they need to be lined up on the optical block such that the red, green and blue photosites for each pixel line up precisely. Traditionally, this was done by cementing the sensors onto the glass and aligning them before the glue dried. Sony, fairly naturally, don't talk about that sort of level of engineering detail, but we can safely assume that the requirements are quite trying.

The result is a three-chip, 8K camera with performance up to 120 frames per second. It's designed to use conventional broadcast lenses, necessitating a converter to cover its larger sensors. At 1.25 inches, the effective image circle is 18mm in diameter, putting it somewhere between 2/3" video and Super 35mm in terms of sensor size. It was shown today with a Canon broadcast zoom; tomorrow, Fujifilm's UA-series lenses, which are designed for 4K work, are to have a go. Naturally, the requirements for lens sharpness on this camera are likely to be enormous.

It's a biggish device, in the plain-sided style of a live broadcast camera, but that's hardly a concern given its application. Sony aren't even talking about launch customers yet (NHK is a fair bet) but, unlike the 8K camera projects which have existed to date, the UHC-8300 is a product and will be available within the year.

In theory, it's apparently possible to take the camera and its rack-mounting CCU and record the signal in the field - though you'd need to be able to handle sixteen 3G-SDI signals to handle the highest resolution and frame rates.

Sony's press release follows on the next page.

Amsterdam – 15th September 2017: Sony today unveiled the UHC-8300, its first 8K camera system to include 1.25-inch three 8K sensors, which will be demonstrated at the Sony stand 13.A10 at IBC 2017 for the first time globally. It opens up the world of 8K with the flexibility to offer customers new capturing technology for shooting in 4K and more.

“At Sony, we’re always finding new ways to empower amazing storytelling and to help our customers meet the demand for stunning 4K capture” said Richard Scott, Head of Media Solutions, Sony Professional Solutions Europe. “The unveiling today of the 8K sensor technology offers the capability to capture for 4K production and is a leap forward in imaging technology that will give media companies such flexibility when shooting 4K productions today“.

The UHC-8300 camera system can be used not only for 8K production, but also for 4K. It’s able to generate 8K, 4K and HD signal outputs simultaneously applyingdifferent colour spaces and OETF to each signal. Simultaneous output of 8K HDR, 4K HDR and HD SDR signals is also possible. Accessories for the HDC series cameras, such as the viewfinders and the remote-control panels are also compatible with the UHC-8300.

The original lens mount is a 1.25-inch lens mount, but the UHC-8300 can also accommodate B4 mount 4K lenses with a lens adaptor. Media companies are able to choose applicable 4K lenses to ensure they are capturing every drop of action, particularly for live sports production which requires high power zoom lenses.

“This camera is all about giving our customers complete choice,” concluded Richard Scott. “So they have the capability to capture and deliver content with the resolution and range that’s right for each production.”