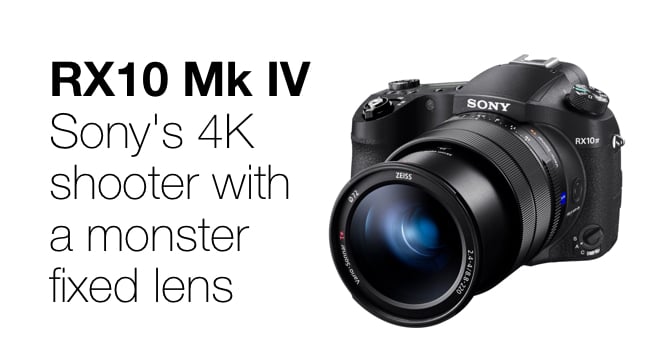 The rate at which Sony is bringing out new versions of its cameras is astonishing. Here's the latest RX10 - and it looks good.

Sony has announced the latest in its RX series of 1” sensor cameras, the RX10 Mark IV. This camera joins the recently-released RX0, a 1” sensor camera in an waterproof action camera form factor weighing just 3.9oz.

Of particular interest to video shooters is its UHD resolution at 24p or 30p with full hybrid autofocus. In HD mode, the camera can capture slo mo up to 100fps or up to 960fps in reduced resolution. Recording is to Sony’s XAVC-S codec. The fast sensor is able to capture UHD video without any pixel binning.

Sony’s RX series of cameras are positioned as a bridge between enthusiast and professional cameras. Sony noted, for example, that photo professionals were shooting RX10 III cameras at the recent US Open Tennis competition owing to the camera’s compact form factor but with built-in 600mm telephoto reach.

The RX10 IV will retail for $1699 and shipments begin in October.