Venice: What does it mean? 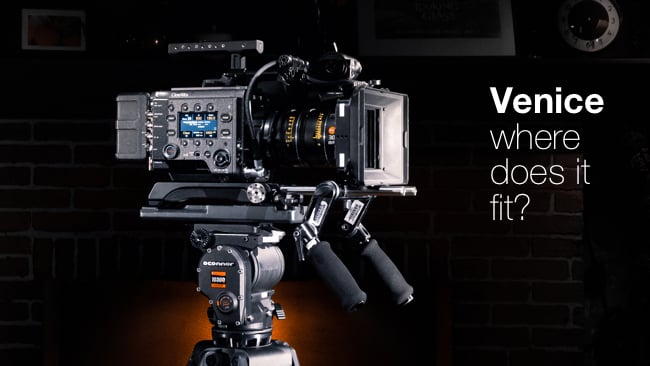 Sony has been teasing this camera since Cinegear back in June, and each time, the trickle of information has raised more questions than it’s answered.

But today, we have most of the answers. We’ve seen the camera. You can see a rundown of the new features here.

We’ve known since June that the new CineAlta camera is going to be Full Frame. Which means that this is a very significant device. Full Frame (36 x 24 mm) is bigger than most existing cinema cameras’ sensors and means that whatever else the camera is, it’s going to be versatile. Not only will it support an extremely shallow depth of field, but a wide range of lenses too.

It’s a brand new sensor, and we now know that it has a native resolution of 6K and while it does not have a global shutter, it has a Fast Image Scan, which will minimise any Rolling Shutter effects. (What is effectively the camera’s predecessor, the F65, had a mechanical shutter). The new sensor has 24 megapixels: more than the F65’s 18 megapixels. (The 4K, 6K type designation doesn’t always give an accurate indication of the number of pixels - it depends on the shape of the sensor). With larger photo sites, you can expect lower noise and better colour.

But we are not calling this a 6K camera. I know this because I asked a question at Sony’s launch event for the Venice at Pinewood Studios, UK, today.

I asked: “Should we call this a 6K camera”. There was no instant “yes” or “no” to this. It was as if I’d asked a deeply philosophical question. And in a way, I had.

Because cameras have reached a point where their “goodness” is hard to characterise with numbers. Yes, more pixels are always going to be better, if that’s the only variable. But it’s not. Dynamic range, colour gamut and a myriad of other fiddly parameters can positively or adversely affect the output from a camera.

Sony clearly and quite credibly think that they’ve created a thing of beauty with this camera and should no more obsess about it's resolution than you’d want to weigh a painting.

In a sense, it’s why you don’t have a specification for your new girlfriend. You just say she’s beautiful.

All of which is to gloss over a tremendous amount of detail.

What does it mean for the industry?

But what I’m really interested here is what this camera means for the industry.

The F65, was - and is - an awesome camera. Some of the best pictures I’ve ever seen in a cinema have come from an F65. Remember Oblivion? It perhaps wasn’t the greatest film, but it looked absolutely gorgeous, curtesy of the F65.

But it’s also becoming clear that the F65 was not only ahead of its time, it was horizontally offset from it too. You could say it’s an evolutionary dead end. And you could say that something better has come along. But we strongly suspect at least some of the F65’s tech has found it’s way into Venice.

Venice will probably be better in the sense that it will be easier to make great-looking films with it. That’s almost its raison d’être. Apparently it’s one of the most researched cameras ever made. Sony has spent the last five years talking to camera users, asking them what’s important. And what they said was that colour, skin tones, wider latitude and, yes, shallower depth of field.

The new camera, Venice, has answers to all of these.

Like the F55 before it, to which, I think, it bears at least some resemblance, it will be a platform that is upgradable, perhaps more so than any Sony camera before it. Not just in software, but in hardware too: the entire sensor block is upgradable.

So - Venice is entering a rarified and highly securitised  space. This is the most visual of industries and there is no room at the top for any camera to be inadequate or not up to the task. I suspect  - and I think Sony knows this too - that people will judge this camera on the aesthetics of its output far more than its absolute specifications. And I think they’re correct to do so. And on that basis, Venice has every right to sit alongside the most esteemed cinema cameras available today.