How to cheat scenes in moving vehicles 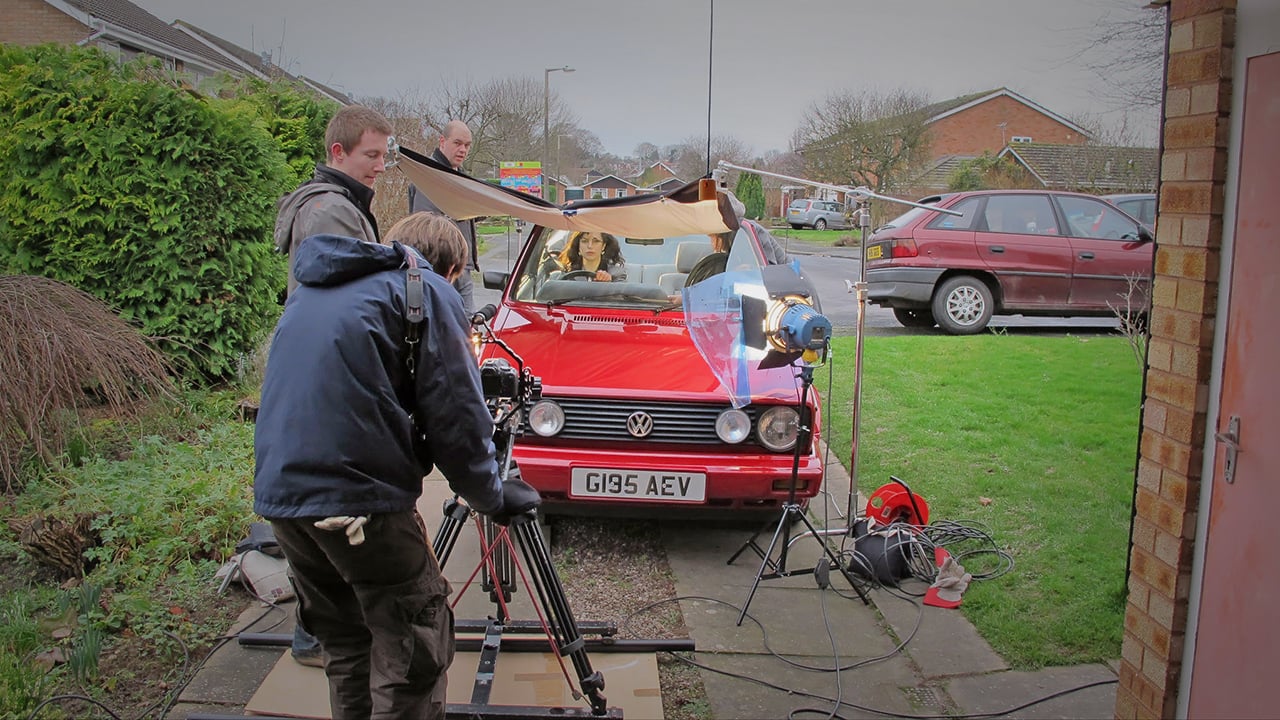 If you don't have a Hollywood budget but you want to film scenes that take place inside a car, here are six examples from Neil Oseman showing how you can cheat the shot.

Scenes in cars and other moving vehicles have challenged filmmakers for over a century. Low loaders (known as Process Trailers in the US) allow vehicular scenes to be achieved more or less for real, albeit with the towed car on a flatbed truck, but they can be expensive. Rear projection was the method of choice during the classic studio era of Hollywood, displaying pre-filmed footage of moving backgrounds onto screens on set, then later with the advent of optical compositing, blue-screens became an option, with backgrounds added in post. In recent years, large LED screens have allowed moving backgrounds to be captured in-camera again.

But there is another way of accomplishing these scenes, one which requires no post production trickery and no expensive equipment. It’s called Poor Man’s Process, and despite its low-tech simplicity, it has been used on many huge movies from True Lies to Dunkirk.

Faking it till you make it

Remember the high-octane car chase in Michael Bay’s 1996 action movie The Rock? Nicolas Cage pursues convict Sean Connery around the streets of San Francisco, destroying plenty of things along the way. You might be surprised to learn that most of the shots of the actors in the cars were done statically in a parking lot, with grips rocking the cars and swooping flags over it to create moving shadows. The cars were positioned so that only empty sky was visible in the background and out-of-focus police lights were moved around in the distance to suggest other vehicles behind. Frantic shaky camera work with crash-zooms aplenty helped hide the cars’ lack of motion. Cut in with the wide shots, the illusion is completely convincing.

Many movies have used the same technique for plane cockpit scenes, using a blank blue sky as a backdrop and blowing smoke past. Examples include the crop-duster in Independence Day and certain shots of the fighter planes in Dunkirk. For his 1994 action-comedy True Lies, James Cameron went so far as to mount his gimballed Harrier Jump Jet mock-up on the roof of a Miami skyscraper to get authentic in-camera backgrounds of the city with Arnold Schwarzenegger at the controls. Many years ago I shot a brief scene in a small prop plane in a hangar, using camera shake and smoke to make it look like it was flying through a night sky.

Returning to earth, director Richard Ayoade used Poor Man’s Process for subway train scenes in his 2013 thriller The Double. After converting an old school bus into a train carriage, Ayoade and his team surrounded the set with lights on dolly tracks and used a black backdrop to represent the featureless darkness of the underground tunnel.

I myself once made a no-budget feature with a major night-time sequence on a moving train. We shot on an old train carriage that some enthusiasts were restoring in a disused siding, with blacked-out windows and a handheld camera. In post, I added the occasional building flashing past to sell the movement.

However, car scenes will probably be the main subject for low-budget filmmakers considering Poor Man’s Process. I’ve done these very effectively both in daylight and at night.

I once shot a web promo with daylight driving scenes, for which we were forced to cast an actor who couldn’t drive. We sat her in the car on a sloped drive with only an empty sky and a distant, blurry tree behind her. I set up the camera on a dolly at the front of the car, so that I could track from side to side to suggest that I was filming from a leading vehicle and make the tree appear to move relative to the car. I added a backlight representing the sun and had a crew member move a flag over it at random intervals to simulate the shadows of passing trees. As a final touch, since the car was a convertible with the top down, we blasted the actor’s hair around with a hairdryer!

With night scenes, moving lights become the key to selling the effect. For a driving scene on a feature last year, I used three dynamic sources. Firstly, I clamped a pair of Dedos to a trolley which was pushed back and forth in the background, representing the headlights of a car behind. Secondly, a runner walked past on a certain cue with another lamp, simulating the headlights of a passing car. Finally, another crew member swung an LED panel, gelled with Urban Sodium, repeatedly over the car like a passing streetlight.

As a general rule, the more you can move the camera and lights, the more successful your Poor Man’s Process will be. Long lenses are most effective because they compress the background windows and reduce the amount that can be seen out of them. They also help throw that unmoving background out of focus, of course. Editing is also very important — judging how long the effect can remain on the screen before it starts to become unconvincing, and intercutting it with exterior views of a genuinely moving vehicle.

As the big movies, I mentioned earlier prove, Poor Man’s Process can be extremely effective when it’s done well. So, next time you’re faced with a scene in a moving vehicle that you want to achieve simply, cheaply and safely, ask yourself whether this low-tech method might be the right way to go.