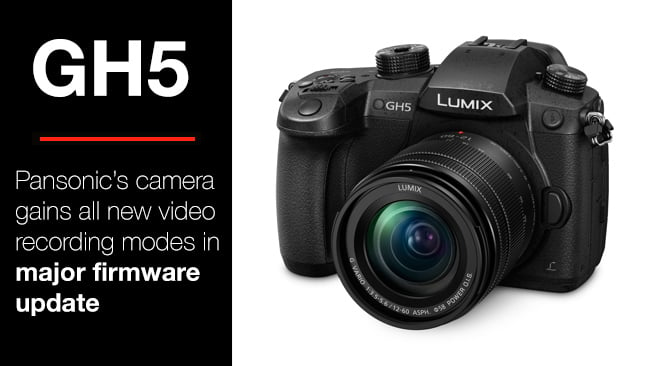 On the up. The Panasonic GH5 gains 6K video modes

On first release the Panasonic GH5 was already an extremely capable camera. But from the beginning, further, major firmware updates were promised. At the end of September Panasonic is releasing the update every GH5 owner has been waiting for.

With releases such as this, it would be tempting to start giving firmware updates names like operating systems. Instead the new GH5 software update is simply called “Firmware version 2.0”. Luckily it is the content of the update that is inspiring, and not the name.

At the head of the list of features, Panasonic have listed compatibility with “Lumix Tether” PC software, followed by improved auto focus performance. It is almost as if the company is doing a bit of an Apple style “one more thing” with the order that they have listed the changes. it is only when you go a bit further down that the real interest starts to pique.

Finally we arrive at the interesting bits. Number four on the list is an additional ALL-Intra video recording mode, which now allows 4:2:2 10-bit intraframe recording in all 4K recording modes. Strangely the 24,25, and 30p modes all record at 400 Mbps, while the 1080p modes, including 60p are all recorded at 200 Mbps. Puzzling, but we will see how this all pans out once user tests start filtering in.

HLG (Hybrid Log Gamma) now makes an appearance, along with a lower bitrate HEVC mode to enable direct playback on compatible HDR displays. Both additions allow parity with some rivals, allowing ready to display HDR footage to be recorded conveniently. Although it must be stressed again that HLG footage is not designed to be graded. For the most versatile recordings designed to be shown on a range of display types, normal log gamma recording will still be the way to go.

One of the most intriguing new additions are the new 4:3 anamorphic video modes, designed not entirely surprisingly for anamorphic lenses. You can take your pick with this one. 4K modes with a resolution of 3328x2496, or you can go up to the dizzy heights of 6K at a pixel count of 4992x3744. Now the caveat here is that while the 4K modes can be recorded using the 400Mbps ALL-intra codec, while 6K is compressed using HEVC compression, but still at a respectable 200Mbps given the advanced compression, retaining the 4:2:2 10-bit colour resolution.

Regardless of any limitations, this is a pretty good indication of where we are heading resolution wise. 4K is on the uptake, much faster than anyone predicted, and it looks like this trend will continue unabated through to 8K. The fact that we are now seeing a 6K recording mode for true video, as opposed to simply time-lapse, on a very affordable camera, shows that it would not be entirely surprising to see 8K cameras as the norm within a very short number of years.

Full details of the update can be viewed on the Panasonic website, and the firmware itself will be released at the end of September.