Can you really tell the difference between film and digital? [Opinion] 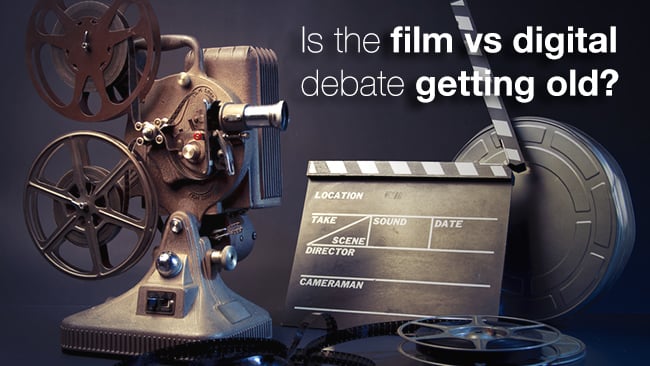 Film still has its fans, but should there even be a debate about the medium we use?

Phil Rhodes’ recent article on whether we are unnecessarily complicating the digital workflow triggered a huge range of responses in the comments. But one aspect that kept coming back to light was whether film really is still better than digital.

Personally I feel that it is an odd discussion to be having these days. In the stills world film is all but dead; the only exceptions being in a few niche areas, or as a hobbyist interest. Most photographers, both professional and amateur, realised a long time ago that using digital cameras helped them rather than hindered them. But in the motion picture arena we still see discussions about details such as the pleasing roll off of highlights in film compared to digital.

Now, I’m not sure about you, but I rarely watch a film by being fixated on looking at highlight roll-off. But maybe that’s just me? The simple fact is that such arguments, in my opinion, are storms in a teacup. For a start, different film stock types have different highlight roll-off characteristics, and not all of them are pleasing to look at. And much of the final result that you see projected in the dark depends greatly on viewing it in absolutely ideal conditions. A more salient point is that anybody worth their salt will protect the highlights when shooting digital anyway. The roll-off characteristics themselves can then be decided in post. I would go as far as to say that in a blind test I do not think most people would be able to tell what was digital and what wasn’t.

In fact there is some solid basis for me to say this when we look at a brief unscientific tests such as this to name but one example.

In those tests, without any exception, the photos that actually were shot on film were voted in the majority to be digital by those who professed to be able to tell the difference. In two of the photos that in fact actually were shot on both Velvia and Superia stocks, the votes for them being shot on film only amounted to twenty odd percent of those who voted. While this is not a scientific test by any stretch, such tests have been performed with motion pictures too, and have shown similar results. The fact is that while we would all like to think that we could tell the difference, the reality is that when the chips are down and we are faced with having to spot the difference for real, we often can’t. Or, if we can, the differences between the two are so small as to be negligible, usually splitting the audience down the middle as to what medium was used.

Even with such minor differences accounted for, digital also offers the following advantages. Instant review, no cumbersome and risky reel changes, no risk of mechanical shutter failure, or hair and dust in the gate, instant exposure feedback, no risk of a third party lab ruining a whole days shooting, lower noise/grain at higher ISOs, lights can be lower powered, accessible to all budgets, amongst many, many others. Other than for nostalgia, there is no practicable or conceivable reason why anybody would really want shoot film over digital in todays production world. It is a skill and knowledge set, that, no matter how much you want to fight it, will be irrelevant in the not too distant future. These skills and knowledge will of course be kept alive by enthusiasts (and I count Christopher Nolan as one of those), in the same way that some people while away their weekends restoring and driving steam engines, but with ever decreasing relevance to the rest of us.

Film and programme making should always be about what you can do, rather than what you can’t. And while there are a myriad of ways in which film was a burden and a barrier to anyone who was not established or who couldn't afford it, the digital revolution, conversely, has opened doors. It has gone from being the inferior distant cousin to film, through to being, frankly, its equal, and in some cases arguably better when all other aspects are taken into consideration. And in the future it will simply become better, and better.

It is about time the debate surrounding film vs digital was consigned to the bin of history. Thus far, in all the blind tests I have seen so far of well shot material, the results have shown that the self professed film enthusiasts have failed to spot the difference, and in fact in the majority of cases have inadvertently judged digital to look the better of the two! Whether this would be the case with poorly shot material is anyone’s guess. But then we don’t strive to shoot something poorly, do we?