Digital vs film. Has the digital process become over complicated and expensive? 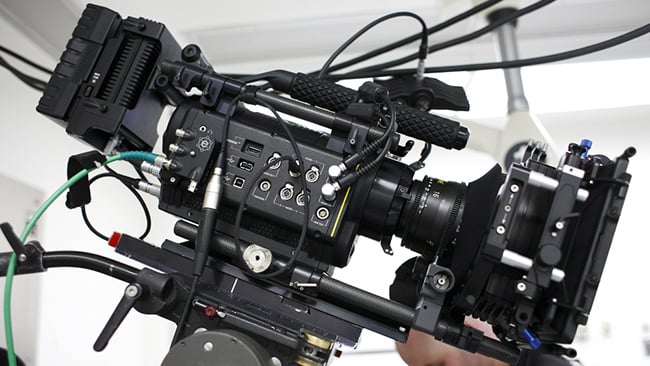 Does shooting digital need to be so complicated?

We are used to old arguments about film vs digital rearing their heads from time to time. With some major film directors still singing the virtues of film over digital acquisition due to costs, is the comparison a fair one? Phil Rhodes doesn't think so.

The people who manufacture film for cinema cameras might be excused for feeling a little upbeat at the moment. It's probably not hard to beat the average over the last decade or so, but the success of things like Dunkirk and The Hateful Eight, in large-format film presentation, are at least keeping up the profile of grandfather's acquisition format. Even if most of the audience are far too distant from a major population centre to actually see one of these films in IMAX, or even 5-perf 70mm, there's probably more understanding of the difference between “film” and “video” than there has been for decades, and the establishment of photochemical origination and distribution as a desirable mark of status and quality will do Kodak no harm at all.

All of this is great, of course, and the enthusiasm of Nolan and Tarantino is contagious, but the resulting enthusiasm does lead people to say some very strange things about shooting film. Nolan, at least, is on record as claiming that there is “no money to be saved” by shooting digitally, which is so hard to substantiate that it's worth discussing. There's no problem with reasoned debate on this topic, and probably nobody's very interested in reigniting the endless debates of the mid-2000s, when digital technology was struggling to match, or even to approach, some of the most critical aspects of cinematic imaging. There are still arguments, but they're almost entirely subjective these days. We can all see the differences, but we can also see the bottom line.

So, in terms of cost, what on earth is Nolan talking about? Most of the arguments which have ever been raised about this involve complaints about the amount of on-set support digital needs and the amount of time spent in grading. Digital shoots need a digital imaging technician, advanced monitoring, complex combinations of lookup tables, and an involved post path with special LUT-handling tools, frequent calibration of all the equipment involved. And, of course, every shot must be optimised using every tool available in the world's most advanced grading software.

None of this is neccesary

Except, of course, that none of this is true. None of this is necessary. It's quite possible to achieve excellent results using nothing more than a Rec. 709 monitor and the tools built in to most cameras. If anything, Dunkirk has, by way of look and lighting, pretty conventional photography. It's glitteringly high resolution and low in grain, of course, but an Alexa 65 will do that to a level that's probably reasonably competitive with at least 5-perf 65mm negative, especially once it's been through an interpositive and internegative process. Compared to something like Saving Private Ryan, Dunkirk is otherwise fairly unaffected and straightforward. It has even been criticised for a few matching issues, simply because there's no very easy way to trim, particularly, black levels during a conventional finish.

And naturally, you're entirely free to shoot an Alexa 65 that way, if you'd like. You aren't required to spend days preparing LUTs. Contrasting the costs of a film shoot with the costs of a digital shoot with all the trimmings is therefore not a like-for-like comparison, it's a deliberate attempt to make digital seem expensive. Shooting digital without all the toys and help is something that's done in practically all circumstances other than high end drama or cinema, and it requires more from the director of photography, but it's far from impossible and there's an argument that all the indulgences of complex workflows and on-set grading are just that.

Ultimately, this shouldn't be taken as an attack on Nolan's arguments for film. He's correct in that the costs of film origination are a trivial part of the costs of a large production, and he's correct that digital shoots very often include a lot of sophistication that is expensive. Really, though, this is intended as a polemic against the excessive complication of digital acquisition. It'd be great to see digital acquisition simplified, and it'd be nice if a whole truck full of monitoring and grading equipment and one or two extra crew were not considered an automatic requirement on so many productions. It isn't necessary and it makes everything longwinded and expensive. Can't we learn to do without? We always did.