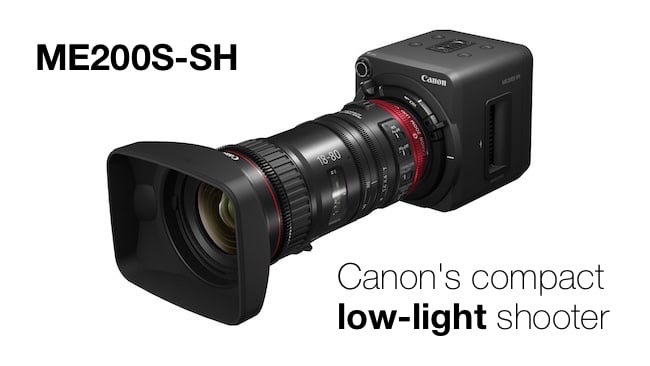 RedShark Review: A cousin of the remarkable 4 million ISO ME20F-SH, the Canon ME200S-SH shares the same form factor and is essentially a box with a sensor inside of it. That means that from straight shooting to drones to gimbal mounts, there is a lot you can do with it.

When Canon announced and showed demo footage of its ME20F-SH camera, it astounded viewers with footage that was taken in near pitch black environments. Here was a camera that could shoot at an ISO equivalent of over 4,000,000. Such footage is noisy, but it allowed the ME20 to shoot wildlife, for instance, in situations that other cameras simply couldn’t manage without shooting with IR illumination. Now Canon have released a lower cost camera, the ME200S-SH.

Even at lower ISO settings, such as 102,000, the ME20 could capture events such as the Aurora Borealis just as the human eye sees it in fully 10-bit colour. Or at ISO 400,000, film the stars and the Milkyway. Something that previously required slow shutters and timelapse. While the Sony A7SII is also an amazing low light performer, the camera itself is designed for an entirely different function.

However, the ME20F-SH costs approaching £20k including taxes. As a way of offering an alternative to suit more restricted budgets, Canon has created the ME200S-SH. A camera that shares the same form factor, with slightly more limited light shooting capability.

Canon terms the ME200 as a multi-purpose camera. Effectively, it is a box with a sensor inside. The main body weighs in at around 1kg. It is designed to be adapted and used in less conventional settings. Gimbal, drone, and jib/crane usage immediately spring to mind. Although it can also be used as a hidden wildlife camera, and for other remote applications.

The ME200 does not contain its own recording system or battery system, so these all need to be connected externally.

It is clear that the ME200 is designed to be used, and maybe even abused. It is very solidly constructed, with a nice weighty feel. All buttons feel solid, and the spacing should mean that they are not too hard to operate even while wearing moderate gloves in cold environments.

At the business end there is a very solid EF mount with collar locking mechanism, making it more suited to carrying heavier lenses without the chance for play than the standard EF style bayonet mount.

Either side of the body there are two large air vents, while on the back are buttons and a mini joystick to select and control important functions and menus. In addition there are two SDI-out, genlock, full size HDMI out, two remote sockets, a 4 pin XLR DC power input, as well as a smaller terminal block 2-pin jack DC in.

The top and bottom of the body have large screw in points for tripod plates, and for solidly fixing other accessories such as handles, cages, and external recorders. This is not a camera designed for everyday shooting, but well and truly specialist application.

Power up time is fairly fast at around 3 seconds. If you are powering from a battery system, the camera only draws 11W, so run times should be very good. As it is, the demo unit was supplied only with an AC/DC power adaptor system via the 4-pin XLR input, so I cannot comment on real world battery performance, other than to say that it uses very little power compared to most standard cameras. Although you will, of course, need to factor in additional attachments such as video recorders etc, which will need their own power.

This is a 1080p and 720p camera system, however it derives this from a 3840 x 2160 resolution sensor, resulting in an extremely clean picture. Aliasing would appear to be all but none existent. This is a clear case of ‘quality’ pixels as opposed to quantity, utilising a high resolution S35 sized chip to obtain one of the cleanest 1080p signals it can.

Of course, ultimately the picture quality you obtain will depend on the device you use to record footage with. The ME200 offers three options for this. The SDI terminal 1, and the HDMI output allow the on screen display to be switched on and off. This is fine for general monitoring and control. However, it might not be your first choice for connecting to a recorder, due to the risk of the OSD appearing on the recording. SDI terminal 2, on the other hand, is purely a clean output.

The camera has a very straightforward menu system that allows access to all setup functions. It isn’t pretty, but it is straightforward and it works. Standard rec.709 gamma is available, along with a wide dynamic range mode, and a Canon C-log setting. There are also storage banks available for custom picture setups with custom knee settings, black levels and the like. The range of options available should allow fairly close matching with other cameras if required, and the C-log option will fit right in with the workflow of the other EOS models. Canon is claiming around 12-stops of dynamic range in log and wide DR modes.

Motorised ND filters are built in and are button selected. It would be nice if there were more subtle options, since the only options are for 1/8 or 1/64. However, there is also an IR cut filter, which can be moved out of the way, allowing for infrared shooting in low light conditions.

Operation can be further simplified with the addition of the Canon RC-V100 remote control, which allows direct access to control over the iris focus, ND, and virtually all other functions.

Lens correction with compatible lenses is available. Also, interestingly is the ability to tell the camera if you are using an EF-S lens, so the camera can compensate for the crop factor.

Special mention must go to the auto functionality of the ME200. Auto exposure is handled very smoothly, right down to automatically selecting the best ND filter. Auto focus is also very smooth and surprisingly precise. For applications where you might not be able to directly control the camera, it is reassuring to know that it is capable of getting accurate pictures very reliably in this way.

The ME200S-SH has a maximum ISO equivalent of 204,000. This is a far cry from the 4 million or so of the ME20. However, it is still a very respectable low light performer, and should suffice for the vast majority of situations. At these higher settings noise is quite noticeable, although the picture is still surprisingly usable. The offset of having such a low noise, high sensitivity, is that at low gain settings the picture is incredibly clean and noise free.

The Canon ME200S-SH is a very niche camera. Some may eye it with the possibility of rigging it out for standard use, but the reality is that it is designed for more specialised applications, such as on a drone, on a gimbal, or on a jib. For those types of uses it can be rigged flexibly for either remote operation or hands on. It could also be used for security or military purposes given its stellar low light performance.

At around £4k in price, it would seem to represent good value. Although with most new cameras recording 4K, the 1080p limitation of the ME200 means that potential users will need to have a definitive purpose in mind for it, such as live television on a gimbal, for instance.

The competition it is up against includes cameras such as the BMD Micro Cinema Camera and Micro Studio Camera. Given the price range you could purchase four of those cameras for the price of this one. However, while you would be getting a much smaller camera, you would be sacrificing a lot in terms of noise and low light performance, although the Micro Studio Camera would give you 4K recording. As ever, the camera you need will depend on the demands of the production.

The ME200S-SH would be ideal for broadcast environments and event production, it fits right in with the other professional EOS cameras, and it won’t break the bank, either.