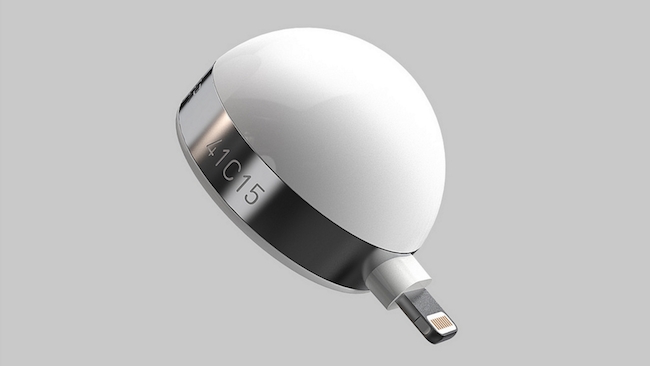 $299 brings you a lot of light measuring power

RedShark Review: Slovenia’s Lumulabs is a small operation that develops the Lumu Power light meter, a hardware sensor combined with an iOS app. It has a fast-response silicon photo diode and true colour sensor in one package.

The Lumu Power light meter sensor is half a sphere with a stainless steel housing and polycarbonate Lexan diffusers. An industry-standard incident meter uses a white hemispherical dome to read the light falling on a subject. A digital camera measures light reflected from a subject. While that usually works out quite well, the meter can be fooled with a wrong exposure as a result. For example, a dark subject on a bright white background (e.g. snow) confuses a camera’s built-in meter. When using incident metering, the lightness or darkness of your subject and its background don’t matter as the meter reads the light emanating from the sky or from an artificial light source before it gets to the subject.

The Lumu app is a free download in the App Store. Without the Lumu Power attached, you can use it as a reflective spot meter, but the smallest spot you can measure with it is about an angle of 10 degrees. A Gossen Starlite 2 offers sport metering at 1 and 5 degree angles, so I won’t discuss this free functionality any further — also, it’s outside the scope of the review.

How accurate is the Lumu Power?

The first thing that I checked was the accuracy of the Lumu Power and whether the device measures up to its published specifications. I started by testing the luminance and colour capabilities of the Lumu Power.

My reference equipment was an X-Rite i1Pro 2, controlled by basICColor’s Display software, which allows you to measure the luminance level and coloristic characteristics of ambient light. Given that professional photographers and printing companies depend on the i1Pro 2 for the colour accuracy of their output, it can be trusted to be very accurate. The Lumu Power has a deltaE of less than 1 in all cases where I measured luminance and colour. This means you will find no perceivable measurement errors when using the Illuminance, Colour Temperature and Chromaticity functionality.

While the colour temperature is represented in degrees Kelvin and a green or magenta shift for which you have to compensate towards the opposite, the app also supports foot-candles. You can also choose to analyse luminance and colour temperature by having the app draw a curve of your measurements and averaging the results — when set to continuous mode.

The Lumu app supports two-light setups with colour differences given in standard colour correction gel nomenclature. An update has been planned to optionally show the green/magenta shift in Wratten numbers, plusgreen/minusgreen values, etc.

I tried to fool the Lumu Power using awful fluorescent lighting in different colours — even mixing two of these together — but while my Sony A700 didn’t know what white balance to set for any of these lamps, the Lumu Power had no problems at all.

Exposure metering is done in the Photo Ambient, Photo Flash, Cine/Video and Photo Spot metering categories of the app. I compared the results of Lumu Power’s measurements with those of my Sony A700’s built-in light meter as well as with those of a Gossen Spot Meter f/Spot Incident Flash & Cine Meter Starlite 2.

When metering for ambient light, the Lumu Power delivered measurements that were consistently spot-on. There were a few tests where I measured a difference of approx. 1% compared to the Starlite 2 readings, but this could be due to my not holding the meter in exactly the same position. I anticipated low light to cause errors, but even with only 7 lux to play with, the Lumu Power kept its cool.

Flash metering was exact too. This mode has two extra features worth mentioning: the app shows a ratio of the ambient vs. flash light and it lets you analyse the flash light curve — the output over time of the flash as you fire it.

The Cine/Video metering mode lets you set an angle instead of a shutter speed. It will measure aperture or angle / shutter speed, at any given frame rate and ISO. There’s also EV and Filter compensation to set, but that’s it. For anything colour-related, you’ll have to switch to the colour diffuser and read the chromaticity values (continuously) as well as colour temperature.

My iOS device to test the Lumu Power with was an iPad Air 2. That is not the best device to use as a light meter. It’s unwieldy to use in the field. By contrast, it’s perfectly usable in a studio environment. An iPod Touch or one of the latest iPhones will handle much better as those are more or less of the same form factor and size as a dedicated light meter.

Each mode enables you to take notes of measurement results, complete with location metadata and the ability to take a shot of the place where you are with the built-in iOS device camera. Notes can be read by opening them from the home screen, but they can’t be shared. What I would also love to have is the ability to save all of the averaging data.

Lumu Power comes out very well compared to the top models of Gossen and Sekonic. The only two things it can’t do is measure flash duration and trigger flashes via radio, something a Sekonic L-858D-U is capable of. The Sekonic will cost you north of $800, though, while a Lumu Power will be yours for $299.