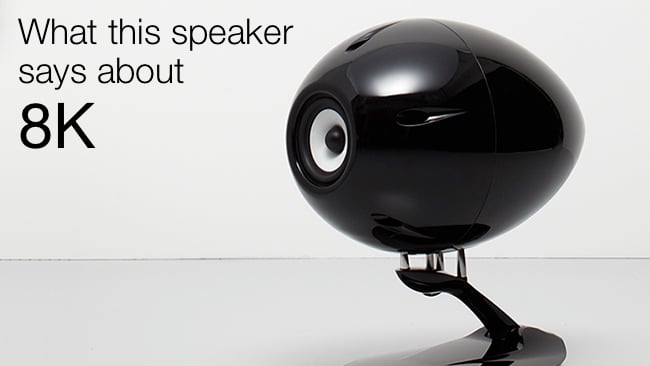 Higher resolutions reveal more in video as well as audio

The way good loudspeakers connect listeners with audio maps on to the way we look at video, especially when we're using older equipment.

I’ve recently been testing some amazing and unusual speakers. They’re the Eclipse TD 510MK II. (You can see the review here.) It’s a large, egg-shaped speaker with a single driver (loudspeaker cone). Inside, there’s precision engineering to ensure that the greatest advantage of this type of speaker — that the sound comes from a single point and not from multiple drivers via a crossover — is nurtured and presented in the best and most nuanced way.

Eclipse speakers have an incredible spatial resolution because of their phase accuracy. It means that you can hear the original recording environments almost like holograms. Every nuance of a performance — of the original microphone, mixer, tape and outboard equipment — is captured. At the risk of sounding like a cliché, it’s almost like "being there".

What does that mean?  It means that when I listened to older recordings — the sort of recording that sounds old because of the way it was made — it felt like I was actually sitting in the recording studio, listening to the musicians through the vintage mixing desk and the ancient loudspeaker monitors.

That it did so convincingly is a huge compliment to the Eclipse loudspeakers. It takes an extremely accurate reproduction to bring out this level of authenticity. And it means getting the basics right: which in this case means not “polluting” the audio with the confusing effects of a loudspeaker crossover.

Now, there’s one glaring error in my analogy here, which is that a loudspeaker reproduces a signal: it doesn’t capture it. Perhaps we should be talking about microphones here instead?

Maybe. But I would argue that microphones are equally important in the entire chain of reproduction. Each and every part could be a “weakest link”.

With digital recording and reproduction, whether it’s audio or video, the aim should be to keep the recording out of the way. What I mean by that is that it should have as little effect as possible on the subject of the recording.

You may think it’s ironic that in my example above I talked about vintage recording equipment. Why would I invoke a technique that is by almost every available measure inferior to what’s available today?

It’s because old recordings don’t necessarily sound terrible. In fact, they sometimes have an indefinable quality that makes them attractive to our ears in a way that we can’t easily achieve today. It may be analogous to the look and feel of an old leather sofa or even a 300-year old oil painting. Perhaps there was an innocence about those primitive antecedents to today’s recording studios that shines through in the recordings.

Whatever it is, I heard it more through those Eclipse loudspeakers. They either intensified the experience or merely allowed it to be heard unencumbered by compromising technology.

So, what does this have to do with video?

Simply, that for all the arguments that say that super-high resolutions like 8K are unnecessary, there’s a very powerful one that says the more resolution you have on your sensor, the more detail you can capture. I don’t think anyone would argue with that. But to go back to our analogy with old studio equipment: having more resolution means that you can capture and reproduce even the tiniest nuance and foible of a vintage lens.

When we watch footage from the past, it was almost certainly captured on film and shown on film. Unfortunately, later, it was probably then shown anything from black and white 405 line TV (in the UK) to 525 line NTSC colour in North America. Neither would have even approached the resolution and sheer information content of the original film. Those early TV-standards would only have captured the intimate character of the lenses and film stock in the vaguest and general of senses.

For many of us growing up in the seventies, our experience of older films would have been solely via these extremely low-resolution TV-formats. It’s a complete revelation when you see modern HD-scans of those same films. Most of us had no idea how much colour and detail we were missing in our earlier days.

Shooting super-high resolution video with vintage lenses is likely to give you the best possible experience of those old devices. Some would argue that this is a misuse of technology: that if we can shoot ultra-detailed video then we should do exactly that — with sharp lenses. But this is and always will be an artistic decision. It’s not an absolute. If the effect you’re seeking is the “look” of an old lens, then super-high resolution — 8K or whatever — is going to give you the best results.