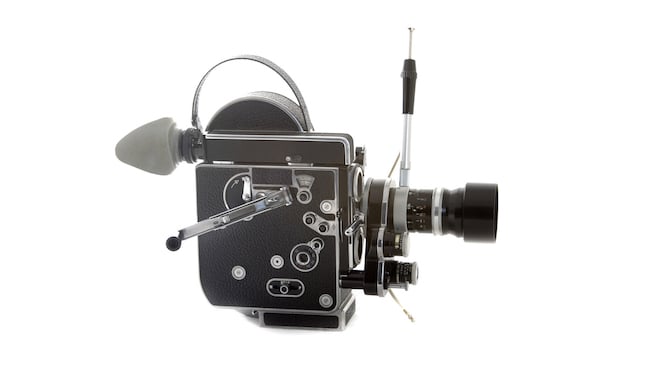 Fancy using this on your next shoot?

From vinyl to phones to lenses… to borrow a cliche: retro is in many ways the new black. But how far can we take this? Is there a market for a retro camera?

There are several companies making Super8 film cameras these days, including Kodak. While most filmmakers these days are pursuing the highest technical quality they can afford, there are still some who enjoy the vintage look of Super8.

These Super8 cameras, while retaining the old-school Super-8 shape and ergonomics, incorporate new technology. Unlike their predecessors, the new ones are built with modern technologies under the hood. Kodak's Super8 camera, for example, includes a C-mount, digital audio recording to an SD card, USB charging and a digital viewfinder.

In spite of the small format, due to the quality of modern film emulsions, getting a good image with one of these new Super8 cameras is quite doable. All it would take is some artistic talent and good lighting. Much like with any other modern camera, the catch is that you can't preview your recording on-set like you can with digital.

One upside to this is that it forces users to learn to pre-visualise shots and also to develop good practices for metering and exposure to ensure quality results. That discipline and skill translate to digital nicely, enabling a smoother workflow and fewer problems to fix in post.

The downside is that it will require the additional steps of development and telecine before editing can start and the Kodak Vision 3 Super8 cartridges cost around $26 for 50 feet of film. That does, however, include development and scanning.

The Digital Bolex project attempted to revive the well liked Super16 Bolex cameras in a digital form, using a 2K CCD-sensor and RAW image capture. Following a successful crowdfunding campaign, the Digital Bolex launched with a warm reception, building a vibrant community around the new camera.

In spite of being very well received, having a lot of well thought out features and excellent image quality, the Digital Bolex team, unfortunately, was not able to keep the camera alive and ceased production in June of 2016, shortly after releasing an update that added log encoding.

Was the Digital Bolex too retro, or not retro enough?

Nokia's retro cell phone had a lot of appeal when it launched, but from the reviews, the appeal tends to be short-lived. The nostalgia is apparently not enough to overcome the technical limitations of the phone, like the relatively low-quality camera.

On the other hand, there's actually a community of filmmakers using Super8 and there's even a magazine along with a web portal dedicated to that community: http://www.super8.tv. There even was a prototype digital cartridge which promised to turn compatible Super8 cameras into digital cinema cameras but it doesn't seem to have gone anywhere.

Much like vintage glass, vintage cameras still have appeal and are quite capable imaging devices.

The Digital Bolex wound up being caught in the middle. Its retro styling carried some appeal for Bolex fans and its modern digital imaging and audio technology appealed to filmmakers looking for an affordable cinema camera. What Digital Bolex didn't have was volume. It was a small company, its only product line was the camera and with intense competition from Black Magic and Sony, the Digital Bolex got the squeeze.

Hopefully, Super8 will stick around for a while longer. Analog still has a unique appeal and retro cameras are still fun to shoot with. Unlike with retro phones, most retro cameras have good ergonomics, so their appeal is likely to last quite a bit longer, probably as long as developing and scanning remain affordable.