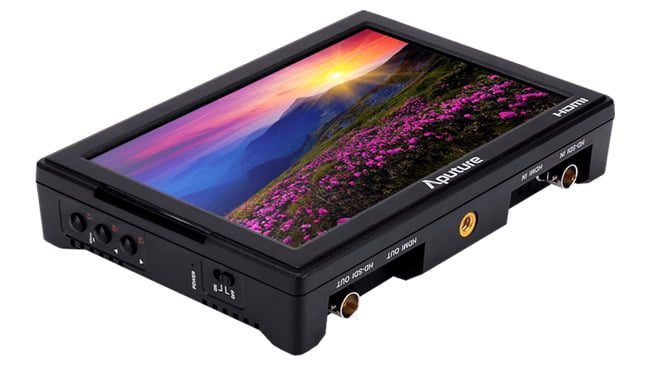 From the first time we looked at Aputure's VS-5 monitor (which, despite its name, is a seven-inch type) there was a hint at more connectivity to come. That promise has now been realised with the enhanced VS-5x.

To recap, the VS-5 series is possibly the most affordable way to own a really good waveform monitor. For technical reasons, creating a high-quality waveform display is complicated: for every line of the picture (or at least every line that's sampled) a graph of brightness has to be drawn on the display, adding to any that's already there. It's a memory-intensive operation and there's essentially no other waveform, or at least nothing even nearly this good, for under US$1000.

Cheap waveforms often look cheap, with lag and latency, low framerate and low resolution, and they often lack the “rainbow” RGB overlay mode that stacks up the red, green and blue channels in appropriate colours for the most informative display. The VS-5 has a waveform that's absolutely frame-accurate and almost pixel accurate when it's in the combined display mode and maintains reasonable resolution when it isn't. There's also a vectorscope and histogram, which are just as sharp and just as fast. Aputure deserves special mention for having produced a set of test and measurement displays that are absolutely up there with the best, for what the VS-5 series costs.

Speaking of money, the VS-5X adds the outputs, as well as cross-conversion from SDI to HDMI or vice versa, and costs $599. The original VS-5 is $100 less, which is a pretty attractive deal considering that a decent HDMI to SDI converter typically goes for somewhat more than a hundred dollars. It's difficult to test every possible combination of SDI signal and HDMI device, and there will always be some HDMI devices that don't like certain signals for no readily apparent reason, but this new feature will particularly suit people moving up from the most basic DSLR shoots to a situation where there may be a need to feed downstream monitors. It's lightly built, but that at least means it's lightweight.

The VS-5X is not in any sense a precision colour display; it's meant to sit on top of a camera, out in the changing ambient light where no display can give an accurate impression of the picture without test and measurement features. About the only missing feature is that there are no LUTs, and it seems deeply churlish to complain about that at the price. Even so, LUTs are becoming important on shoots at all levels. This is particularly true in situations where low-cost cameras are increasingly likely to offer log recording modes, but just as likely to simply output that signal unmodified. Higher end cameras often have LUT capabilities built in, so it's actually in conjunction with smaller, lower-cost cameras that these features are most essential.

Aputure seems keen to provide as wide a range of filmmaking electronics as possible, so it doesn't seem impossible that something to address the LUT issue, whether it's an improved monitor or an external device, might eventually arise. Given the cost of 4K LUT boxes, there would seem to be an opportunity.