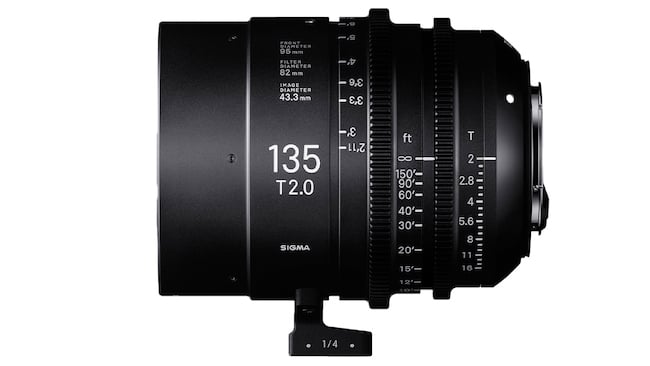 Sigma's rather enthusiastically received Cine 14mm and 135mm lenses and sets will begin shipping late July 2017 for EF, E and PL mounts for $4999 each.

Sigma has been around since 1961 so it has a lot of experience with lens design and manufacturing by this point. In more recent years their modern Sigma ART series lenses have become very popular and respected by those looking for bargain stills lenses they can repurpose for video work. They are especially popular with people who want to maximise the resolution and sharpness from their cameras. Sigma claims that the lenses can resolve up to 8K and obviously there are now people with RED cameras with 6K and 8K sensors who can shoot at such high resolutions and are looking to maintain as much of that resolution as they can.

Now the same glass used in those respected ART lenses is available in new cine versions of the lenses which all have 180-degree focus rotation, 95mm front diameters and standardized 0.8M gear pitch for use with your follow focus etc.

The Sigma 14mm T2 Cine Prime is especially interesting as it is a really wide focal length while maintaining a super fast T2 maximum aperture and full frame coverage. Most of the other lenses in the Sigma set are a staggering T1.5, but T2 is still extremely fast for a 14mm lens. It gets harder to maintain speed as lenses get wider, as they typically need to have additional glass elements. These extra glass elements are needed because at 14mm the lens would need to be very close to the focal plane, but there is still the need for physical focus and iris controls which need to be of a certain size to be usable. Thus extra glass is needed to make sure the lens focuses correctly on the focal plane in spite of the increased size. The trouble is that the extra glass slows down the light a little, but Sigma has done a great job of maintaining speed and resolution. They claim that even the 14mm lens can resolve a maximum of 8K in optimal conditions.

It's often really handy to have something a bit wider, for instance when working in physically tight locations! Wider focal lengths are also often sought after by those using cameras with smaller sensors too so the addition of a 14mm focal length is good news for those looking for a lens set that will work well with a diverse set of cinema cameras. The set now has focal lengths that are very wide at the same time as having full frame coverage for those cameras with larger sensors.

At the most telephoto end of the lens set, Sigma is touting the 135mm T2 FF Cine Prime as being one of the sharpest lenses on the market, so if you are shooting full frame and you want tack sharp images, perhaps this lens will be your friend.

If you just need to buy the two new lenses, perhaps because you already have the original set of lenses, then you can buy a two lens set consisting of the Sigma 14mm T2 FF, 135mm T2 FF with an additional protective lens carrying case for $10,499.

The lenses all have full-frame coverage and are available in Arri PL, Canon EF, and Sony E mounts.

Both the new lenses (14mm and 135mm) will be shipping this month (July) and the other lenses in the set are already available to order.