You want retro? How about an app that makes you wait for your pics 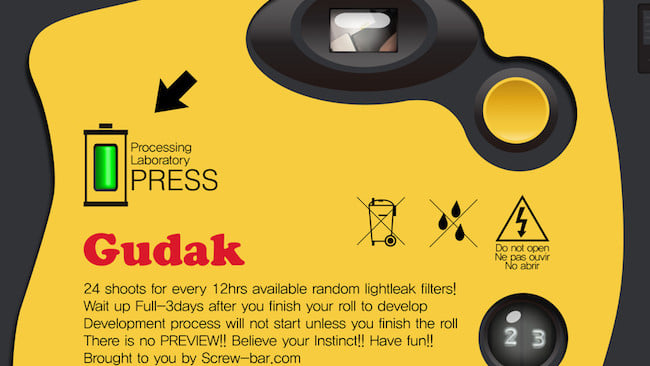 welcome to the past world of very non-instant gratification

While the ability for Millennial culture to embrace retro aesthetics seemingly knows no bounds, it might struggle to be quite so enthusiastic about recreating some of the limitations that pre-digital technology imposed.

Dial-up, analogue phone dials that took an age to rotate back to 0 again, the lack of any means to record TV programmes, sticking a coin on top of the cartridge of your record player so that the music wouldn't jump on a warped record, the load times for cassette-based games on the C64...We fought the internet wars for a reason, y'know.

Gudak, a neat little iOS camera app that is not without its charm, is a case in point as it recreates some of the frustration of waiting for technology to happen.

Basically, it recreates the vibe of an old film camera by limiting you to taking 24 shots per 12-hour period. Any pictures that are taken are done via a tiny viewfinder screen (though the developers, Screw Bar, look to be taking pity on users and are widening that slightly). And, and this is the kicker, you have to wait a full three days to see any shots you have taken.

Of course, you can override that by messing with your phone's date settings, but that isn't really the point. In an era where huge fortunes can be made by making gratification ever more instant, it's instructive to remember what things used to be like. And then switch back to the main camera app as soon as possible...

Hat tip to The Verge.