Practical effects so good they need a 'not CG' disclaimer 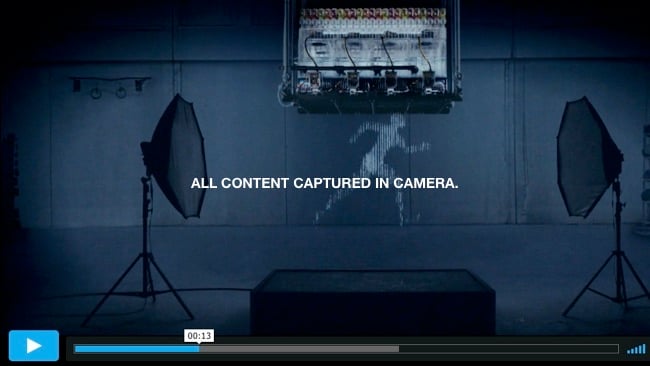 A video well worth a watch...

Whether it’s because CG is getting so good it is indistinguishable from reality or that, in this era of fake news, trust has broken down, but more and more productions now feel they have to state up front that we're watching real-world photography when something spectacular takes place on screen.

Such is the case with Gatorade's Active Water promo for its G-Active brand. The minute-long piece is such a celebration of practical effects that the finished commercial is practically a making-of in itself. There is a complete behind-the-scenes production to complement the piece, complete with all the interviews and technical inserts one would expect of a major feature film and the making of is just as well-produced as the main event. There are two interesting things about the Gatorade Active Water promo, and only one of them is the way it was produced. We'll talk about that in detail below.

One thing that's definitely worth a paragraph or two here, is the whole approach. There's very little of the usual subterfuge of showmanship here — there's no magic behind the smoke and mirrors because there's no smoke and no mirrors, although there is arguably still a bit of magic from all the electronics which must be involved. Nothing is hidden. Undeniably slick and impressive as the piece is, the advertiser invites us behind the scenes from the first few frames of material, showing the water nozzles which create the effect. This is a very deliberate piece of directorial technique which makes the viewer part of the team, implying trust and familiarity which is presumably calculated to appeal to the sort of people — people who get involved in sport — who'd be interested in the product.

And there's no cynicism inherent to this analysis. Something interesting has been created and we're invited to share in that interest, much as we'd be able to see the strings on the puppets but enjoy a skilled performance nonetheless. This is an approach which should be raising a Spock-like eyebrow on anyone who's ever thought of crowdfunding production because this is exactly the sort of engagement with an audience that makes projects work on the likes of Kickstarter and Indiegogo. Of course, success in these endeavours comes first to those of us who are good-looking and personable and good in front of a camera as well as behind, but that's probably not a new phenomenon. The Active Water piece at least indicates a tolerance for the technically interesting that may be somewhat new. Shoot that behind-the-scenes material carefully, people, and don't view the post-production as playing second fiddle to the main event.

The details of what was done are equally fascinating. It is probably a completely novel effect, relying on the precisely timed release of drops of water, which are then frozen by the tiny duration of a photographic strobe. The details of the three-dimensional figure created by a collection of falling water droplets are really only visible to the camera when that extremely brief duration light is used. Under continuous illumination, they're distorted almost to invisibility by motion blur and the non-linear acceleration of one Earth gravity of 9.8 metres per second squared.

One thing that's easy to overlook is the need to get from the motion capture, which is documented, to the water rig on set, which is also documented. What isn't documented is the considerable quantity of software that would be required to go from the sort of data handled by motion capture and visual effects software to the timing information required to fire all of those nozzles. To some extent it can be viewed as roughly the same sort of calculations done to create voxel — volume pixel, that is — graphics, a technique which was flirted with in the late 90s and is still occasionally proposed now, even if we don't count the sort of particle systems currently used for smoke and flame effects. There's a great primer on voxel graphics here on YouTube. Suffice to say voxels are notoriously difficult to animate, though the 2000 nozzle-count only really suggests a resolution around 44 by 44 droplets in the horizontal axes.

Pile all this together and we've something that really hasn't been seen before and which we're invited to enjoy on every level. If nothing else, this level of originality is somewhat rare.