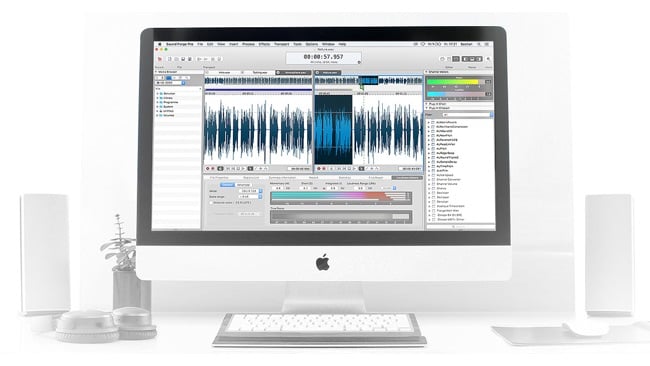 RedShark Review: When Magix Audio took over Sound Forge Pro Mac from Sony, the application was in need of some serious updating. Happily, the first upgrade of the $299 sound editor by its new owners hits the mark.

The easiest update Magix has made to Sound Forge Pro Mac 3 must be the inclusion of iZotope’s newest RX 6 Elements and Ozone 7 plug-ins. But, luckily for us, Magix Audio didn’t simply stop there. Sound Forge Pro Mac finally becomes the sound editor with the ability to load audio streams of video files. The best news of all is that you can load a great many video file formats, including MOV, MP4, XAVC, XDCAM, AVCHD and others. I haven’t tested them all, but the ones mentioned here worked great.

Vide files can be dragged to Sound Forge Pro Mac 3 after which the app will automatically load only the audio component. It will take a while for some audio streams to finish loading, but once it has, Sound Forge Pro’s many tools, plug-ins, plug-in chains and export formats are all at your disposal. Some tools and plug-ins won’t work with more than two channels, though, which may be a problem with multi-channel recordings, eg. from an Atomos Shogun Flame or Inferno.

The strength of editing with Sound Forge Pro Mac has been its event-based editing paradigm. You enter the event-based mode as soon as you drag part of your audio to another location within the file or across open files. For example, if you have an interview with different retakes, cutting parts from a retake to the main “master” file places you in event mode. That mode allows you to mix the audio, replace it, nudge it into place, etc.

Unfortunately, the previous version of the app would often crash when in event mode. The new version is rock-solid. Together with, for example, iZotope’s also included Nektar Elements, Sound Forge Pro Mac 3 has become a really good sound editor for video and film.

As part of the review, I decided to record a short monologue with a GoPro HERO5 connected to a Shogun Flame. I ended up a rather muffled sounding voice recording. I loaded the video file into Sound Forge Pro, removed the noise with iZotope RX 6 Elements’ Voice Denoise and processed further with Nektar using the preset for voice-overs that I modified.

The result was a decent sounding voice recording that I added to a Final Cut Pro X timeline. Turning off the original sound lane and using the edited file instead finished the job in well under ten minutes.

Of course, the new version of Sound Forge Pro Mac has more to offer and some of the new features are also interesting for one-man or Indie filmmakers who want to create and publish their own soundtracks on iTunes. The app has a “Mastered for iTunes” preview. Furthermore, Sound Forge Pro Mac supports automatic loudness levelling and the creation of an archive when burning a master disc.

There’s a new Find/Repair tool, which has seven presets for the most common glitches in an audio file, including clipping and sound glitches. You can also play with the only two parameters — Level and Clip Length — in order to find/repair exactly what you need.

Finally, Magix Audio included a nice number of its own plug-ins in the new version. Included are Noise Gate, Chorus, Reverb, Simple Delay and Flange/Wah-Wah plug-ins.

Sound Forge Pro Mac 3 is a great replacement for the editor that Apple once included with FCP 7 and earlier versions. It costs €299.