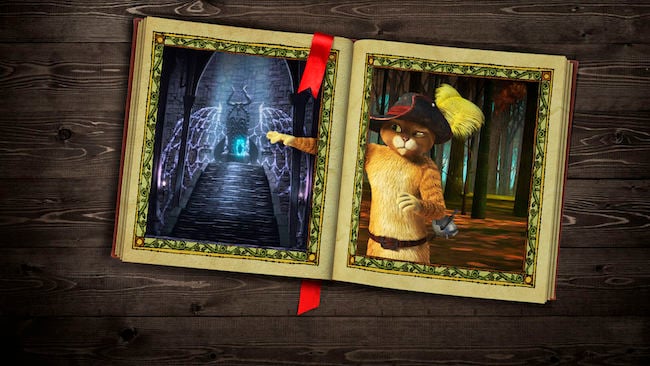 One of the great holy grails of modern TV has just had an impressively large rollout as Netflix has uploaded its first interactive TV episode to its servers.

Interactive video, where the viewer makes a series of decisions involving branching plotlines, first reared its head in the days of CD-ROM and interactive games such as The 7th Guest when clunky loading times made it a far from seamless experience. But it is a wildly popular format in many forms of media — the Fighting Fantasy and Choose your Own Adventure books sold millions of copies in the 1980s — and a new generation of viewers is very used to the concepts of branching multiple narratives from computer gaming. So it makes sense to try it with television.

And, Netflix being Netflix, it tends to roll it out to its 100 million or so subscribers and just see what happens rather than focus group an idea to death.

The first show of three — all kids’ shows — to have the treatment is DreamWorks Animation Television’s Puss in Book: Trapped in an Epic Tale which features 13 decision points along its path. As a result, the show either lasts for 18 minutes or 39 minutes. 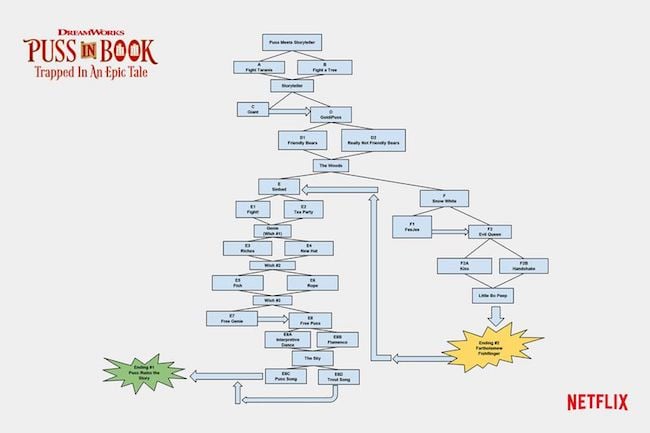 As you can see from the diagram above, whatever decisions are made the narrative does not diverge wildly from a core plotline. But one of the things that Netflix will be hoping is to have lots of repeat plays as viewers explore all the different narrative paths.

Obviously, animation lends itself to this sort of thing. But it’s fun to extrapolate outwards and think of how this sort of technology might cross over into live action and adult television. A Stranger Things where Barb was rescued? A Man in the High Castle where the bomb didn’t go off? A series of The OA where the plot made sense?

Obviously, given that plot lines of adult episodics are often a bit more complex than kids’ cartoon series, this would not be an easy undertaking. And it’s probably not yet time for below the line talent to start dreaming fondly of simple shoots spiralling out to days and weeks at standard day rates as every plot twist gets followed through to its logical conclusion. Or post to start having nightmares about keeping track of every grade and how to gracefully edit the whole thing together. Continuity? You might just want to go and have a lie-down.

But it does highlight the fact that it’s not just the formats that change, sometimes it can be the medium itself. And while it might be a bit of a gimmick, at least initially, some of the potential lurking behind Puss in Books’ simple flowchart is fairly impressive.