Canon gets the price right with the new EOS C200 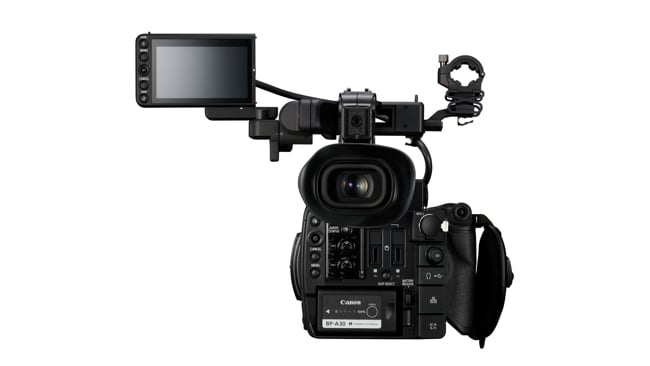 But don’t imagine it fits half way between those cameras. One clue as to its actual positioning is that the new device has the same sensor as the C700.

This shouldn’t come as a surprise, for a very good reason.

And that is that it’s getting harder and harder to design a bad camera. Or even one that’s slightly off the boil. The new C200 is - based on the specifications and the sheer feel of it - a very good device. So what you have in the C200 is a camera that’s like a cheaper C300 MK II (which also shares the C700s sensor) with just enough left out to make broadcasters and a select few that need the rarified additional features of the C300 II want to still buy it. And for the rest: the C200 is a no brainer.

The physical form of the C200 is great. It’s still very recognisably part of the family. The main controls are essentially the same. The XLR sockets have been moved from the handle to the body. But the top is flatter. Some of the earlier EOS “C” cameras ended up looking a bit too tall by the time they were fully rigged. The new device looks and feels stable. I don’t know exactly what it’s made of. Most of the outer layers are plastic and there’s presumably a magnesium framework inside. But it feels great. It’s undoubtedly solid, and yet although it has a definite heft, it’s not so heavy that you couldn’t hold it steady for long periods.

There’s a new 4” touchscreen OLED viewfinder. This has the immediate benefit that you can set focus points with your finger. There’s face detection too, and if you have two faces in the shot, it’s very easy to toggle between them. The Dual Pixel autofocus now covers 80% of the screen. When you see this working it’s impressive and while it was received wisdom that you shouldn’t use autofocus for video, unless you have a dedicated focus puller, then if you’re shooting faces in 4K, you need to be pretty damn good at focusing if you’re going to insist on doing it manually.

You’re probably wondering whether it supports internal raw recording. The answer is that it does, and in a completely new format: Cinema RAW Light. Canon says that with Cinema RAW Light “the EOS C200 provides the same flexibility in colour grading as Cinema RAW in a smaller file size, enabling filmmakers to record internally to a CFast card. When I spoke to them, Canon was reluctant to describe Cinema RAW Light as “compressed”, preferring instead to call it “Data Reduction”.

4K raw recordings at or below 30 fps are 12 bit resolution and have a bitrate of 1Gbit/s. You will need a lot of C Fast cards, and they're expensive, but if you manage your storage carefully, it will be do-able, and the pictures should be ample reward for the cost of the storage.

Meanwhile, this is going to be fascinating. At long last, Canon has a camera with very good specifications at a competitive price. Several years ago when the EOS C range was launched, most people assumed that this was a natural progression from the 5D for aspiring video makers who wanted a dedicated video camera. The C700 and the C300 MK II are regarded as pricey but good (we’ve seen some stunning footage from both of them, courtesy of Brett Danton). But they weren’t cheap.

Now, with the C200 - and while we’ve held the camera, we haven’t seen the pictures yet - we have the promise of Canon’s famously good images (especially colour!) from a camera that’s priced in the same region as Sony’s FS7.

This could be a turning point for Canon.