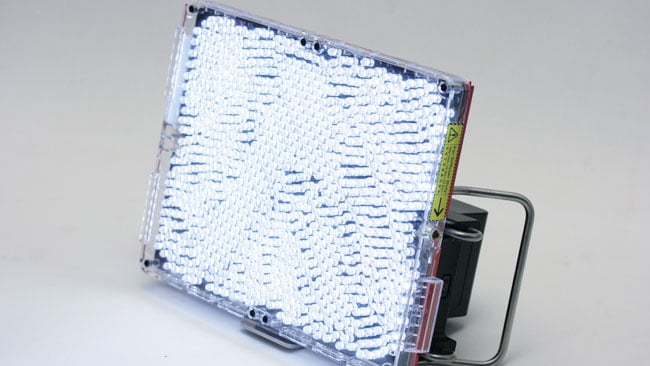 RedShark Review: LED panels are now available at every level of the market, from the homemade all the way up to the gold-plated, with a bewildering selection of products at more or less every budget level. Aputure's new Tri8 LED panel sits pretty firmly in the middle and, as such, has more than a few interesting details to consider.

Superficially, the Tri8 is a straightforward daylight LED panel in the 50W range, although a glance at the LED array itself reveals the most obvious innovation. The scattered layout is designed to offset the issue of segmented shadows, which are commonly caused by LED panels where all of the emitters are in even rows. Scattering them as the Tri8 does is something that should have been thought of before, but for some reason, it has rarely, if ever, been tried. The result is that shadow segmentation is almost completely eliminated, other than in particularly extreme circumstances of close proximity lighting.

Since it's equipped with an array of 5mm LEDs with built-in collimating optics, the Tri8 produces that sort of projecting semi-soft light that LEDs do so well and which can only otherwise be created with a very big fresnel and some flags. The caveat of this is usually the segmentation issue and by diffusing to remove the segmentation, the projecting nature of the light is lost. The Tri8 avoids this. The value of this simple, effective little innovation is not to be underestimated and I hope we start to see it more widely used. 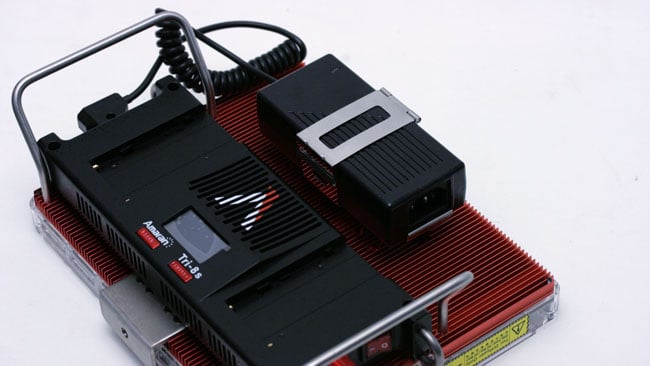 The mains power supply is retained with a clip

Otherwise, the red anodised heatsink recalls the Light Storm series, though it could do with rounding off on the sharp corners of the fins at the top and bottom. There's a transparent cover over the LED array which also supports the frost panel. This is quick and easy to slip into place without feeling as if it's going to fall out at the wrong moment. The front panel also supports the two screw mounting points for the softbox, which is identical to that used on the Amaran 528 and 672 (the grid, not supplied, is also compatible.) The softbox itself is a bit of a fiddle, being mounted on a set of plastic rods with hooked ends which retain the actual diffuser, but it can be stored partially assembled and that saves some time. It doesn't really make the light-emitting surface all that much bigger, acting instead mainly as a diffuser rather than having much effect as a softbox. 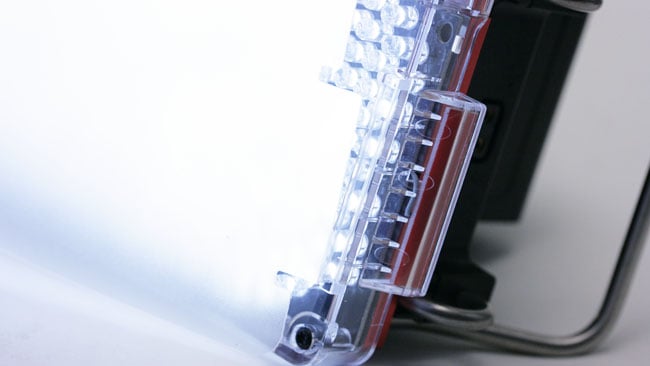 The flexible power options are probably the second key benefit of the Tri8, in addition to the scattered LEDs. The electronics module, mounted permanently on the back, sports two mounting points for Sony NP-F series batteries. Two are supplied, both are required and on paper they run for two hours, but should run a bit less than two — rely on 90 minutes. There's a push-button release mechanism to ensure they don't easily fall off. One particularly nice feature is that the light will charge these batteries when mains power is available, which is a real convenience boost. Between the batteries, an OLED display provides more of a user interface than the device really needs. The only options are the brightness level and the radio group and channel, but it's a bold and readable display and does the job nicely. 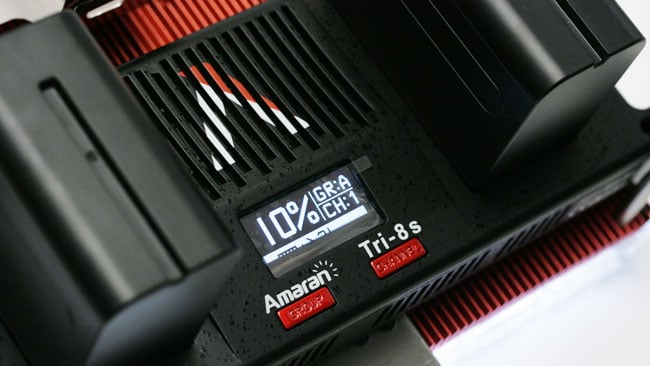 The mains power supply is mounted in a clamp above the electronics, which is a simple solution to the problem of dangling external boxes. External power, which is connected via a D-tap input, can also come from a V-mount battery for which a plate and a D-tap cable are supplied. The V-mount battery needs to have a D-tap connector on it since the supplied V-mount plate doesn't have any electrical connections. Given a few minutes' work with an Allen key, the V-mount plate can be attached in place of the power supply clamp, although this does put the battery very close to the electronics module. The batteries need to be reasonably slim (a Core SWX Hypercore 75 barely fits) and even then there can be issues with the D-tap connector fouling on the electronics module, depending on where it is on the battery. It would be better if Aputure supplied a V-mount plate with a D-tap connector on the release-button side. 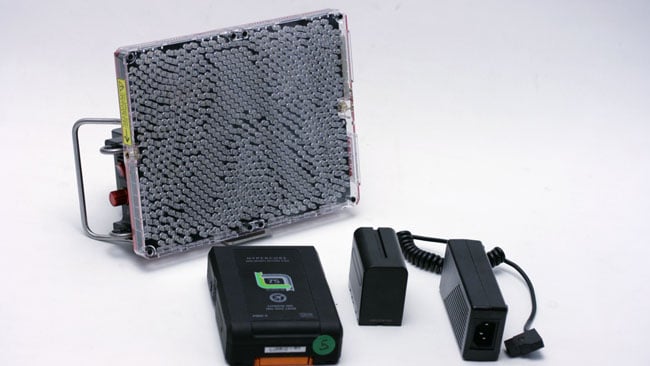 The included power supply is rated at 60 watts, and the Tri8 achieves something like 640-foot candles or a shade over 6800 lux, in the beam centre at one metre. At ISO 400, that works out to an f11/16 split, with output falling only very slightly — less than half a stop — with the frost panel in place. It seems calculated to blur out any remaining vestiges of segmentation from the LED array, rather than to broaden the beam significantly and is well-designed for that task. Losses from the softbox are, of course, much larger, reducing illuminance to 160fc/1700lx at a metre, equivalent to about f/5.6 at ISO 400. Generally, subjects would be more than a metre from the light, but these numbers should give some idea of output. Aputure claim a TLCI of over 95, which should make the light suitable for any application. 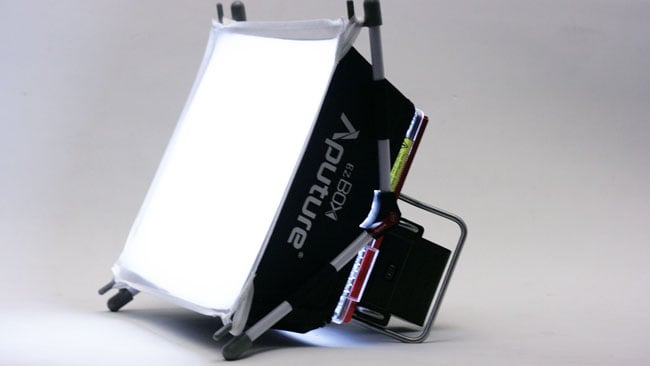 Aputure's softbox only increases the size of the light very slightly, but works well enough within that

The Tri8 has enough small but significant good points that the whole is worth more than the sum of its parts. The scattered emitter layout is good, the battery charging is good, the overall output is good and it is solidly built. The clamp for the power supply is welcome, the way the frost clips in is nice. The light remembers brightness levels through a power outage and, because it has a mechanically-actuated power switch, turns on immediately power becomes available. The COB-120, for instance, does not do this and must be activated either manually or via radio control. The Tri8 supports radio control too, but its more basic power control is actually better. Complaints are really limited to the lack of D-tap connector on the V-mount plate, which is hopefully fixable, the sharpness of the edges and the flimsiness of the power supply clamp, though it's really only a problem when the power supply isn't in it.

The mains power supply is retained with a clip

The Tri8 should be available soon and prices in the $400-500 range have been discussed. That's not the cheapest 50-watt light out there, but the included package of accessories is comprehensive and it seems well made. Perhaps there'll be a tungsten version soon.