Have we already passed peak drone? 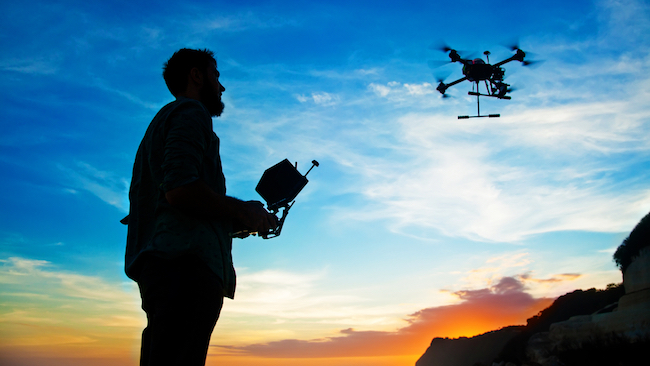 Replay: This article was first written in 2017, but many of the issues raised are still relevant, despite how quickly the industry moves. Simon Wyndham asks, "Have we already passed peak drone?" 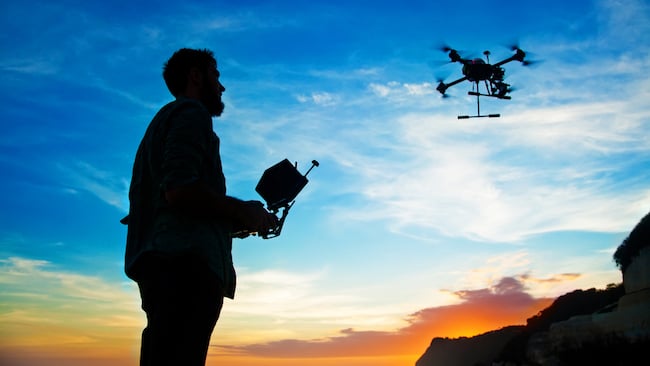 Fun to fly, but profitable? That's an increasingly difficult question.

It has been approaching two years (at the original time of writing) since I received my coveted permissions from the UK Civil Aviation Authority so that I could legally carry out commercial aerial work using a drone. To achieve this took a significant investment in both  time and money. But now I am having second thoughts. Could one of the most significant new freedoms in cinematography now be strangled out of existence?

On the surface, it would seem that the drone industry is going from strength to strength. Well, at least DJI is. With new models being released in a seemingly continuous cycle, there is clearly a market hunger. The Phantom series, for example, just keeps getting better and better. Now with much higher bitrates than previous versions, decent quality video and high-quality stills are now much more possible. The Mavic and Karma have made such gear truly portable.

The Inspire series has also taken great strides. The Inspire 2 is an incredible piece of engineering. For around £10k it is possible to purchase an aerial camera system that gives close to Alexa quality results. This would be amazing for a traditional ground-based camera, let alone an aerial system as sophisticated as this one.

But what of the commercial viability of obtaining your legal permissions now? With many countries now employing a similar system to the UK’s CAA, it is a good time to ask. In the UK, the list of approved and active operators is now up to 2791 (at time of original  publication), and it rises year on year.

Some of these are hobbyists who want to make a sideline to their hobby. Others are pilots who have qualified in-house in their respective companies. Even so, the number is still high, given that the demand for aerial work pales into insignificance compared with the demand for traditional video production. Whatever service you offer with your Phantom, the chances are that your potential client either already uses someone else, or knows someone they could use.

When it comes to specialist applications, such as building inspections, quite regular work can be up for grabs, although much of this work has been mopped up by a select few companies, or it is now carried out in-house.

But when it comes to video production, aerial-based platforms have bit of a problem. Most of the time the air-based shots might only consist of a very small percentage of the full edit and they are for the most part ‘vanity’ shots. Hence the reason why people such as myself have the drone as part of our normal production service. It doesn’t make any sense to pay extra for a third-party company to come in to obtain a couple of beauty shots and persuading the client that it would be worth it is a pretty hard sell. As part of a normal filming day, we can charge for the extra planning time, risk assessment, land permissions etc. But that’s about it. A drone is now just part of the filming kit, just like a jib or a slider. But unlike those other pieces of equipment, a drone is also an administrative burden!

There are some types of filming that only a drone can achieve well. Long tracking shots of cars, boats and other vehicles, building complex overviews, etc. But these types of shoots are quite rare. So the question remains, is the burdensome and costly admin and insurance of retaining a drone really worth the effort? Even more so in the face of the reality that drone shots generally do not have any wow factor anymore. Just like any camera system, spectacular drone shots need to be creative or be of incredible subjects. Otherwise, they are simply workhorse shots like any other.

Regulations currently require that we have to log all fights, and renew permissions each year, keep flight currency, update our ops manuals and pay for costly yearly insurance. Apparently, the CAA is now so overloaded with submissions that it is moving to increase the price to submit applications, and potentially charge large amounts for other aspects of ops manual modifications and additional qualifications such as night flying. Currently, they ask for operators submit renewals three months prior to the due date to ensure continuity. That is quite an indictment of how much pressure and workload they are under.

It is a state of affairs that is potentially easily solvable from an admin point of view. An ops manual, for instance, is a company document and I have never been totally clear why the CAA requires this. After all, the CAA only really needs to know if we have the relevant knowledge of air law, that we are safe and competent to fly, have relevant insurance and our flight skills are current. Much of this administrative burden on the CAA could be relieved if the requirement for an Ops Manual was taken away, and renewals moved to at least a bi-yearly period. After all, not even pilots of real aircraft need to renew on a yearly basis!

As it stands, for the amount of use many drones get in actual commercial operations, the current requirements really do lead me to question the viability and effort involved.

Where will this lead?

This is troublesome and in some ways a bit of a catch-22 for the commercial industry. If the burdens become too much for smaller operators, perhaps the amount of competition will drop off. But the side-effect of that means that aerial work will then increasingly need to be outsourced to dedicated operators, increasing the costs for the client to levels where they just don’t bother on all but the best-budgeted shoots.

The alternative is to drastically reduce regulatory burdens, increasing the number of certified operators but driving down the price for services to unsustainable levels. There is no easy answer. But the dangers the drone industry itself faces do not stop with the commercial sector.

As a commercial operator, people like myself need to keep flight currency. We have to have at least 2hrs flying time in the three months leading up to our permissions renewal. If work is slow, this entails needing to practice somewhere outside of a job from a paying client. Much like any recreational flyer.

And here we have another huge problem, not just for operators like myself but also for the many recreational flyers who make up the bulk of purchases from companies like DJI. In the UK, up and down the land, councils have, one by one, started to ban drones from public spaces outright. Even in Scotland, the right to responsible access laws excluded model aircraft. This means that even in the most remote mountain ranges in Scotland, miles away from any population, you may be breaking the law by flying without permission. Something that in the case of a national park often entails a fee of £250 or more.

In effect, this means that in the UK, unless you have access to a decent amount of private land, flying practice or recreational drone use is becoming increasingly impossible. At least if you wish to do it legally. Such blanket, ill-considered, restrictions inevitably lead to many people flying wherever they feel that it is safe, even if it is technically illegal to do so. But the police are increasingly pursuing investigations from complaints. Such restrictions are not constrained to the UK. In the US, drones are also increasingly being banned from public spaces such as national parks.

We will have to wait and see where this road full leads us. But governing bodies and those in authority should be aware of the full effects of the regulations they impose. There is an entire industry at stake here and it risks going backwards to the days where only high-end specialists can afford the privilege of using such systems legally. From the flip-side, such blanket bans risk making a mockery of the law as ever increasing numbers of people decide to ignore the rules, and ‘shoot’ first and ask questions later.