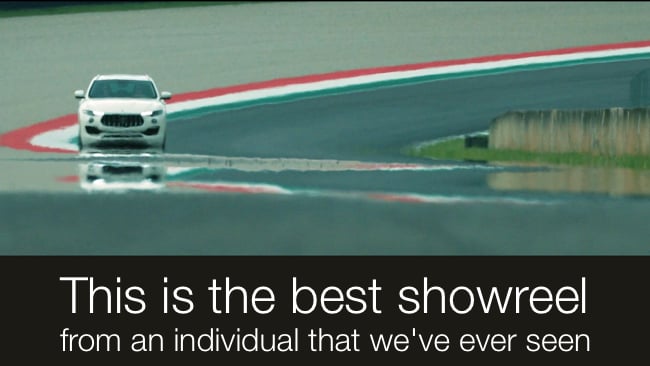 If you're thinking of making a showreel, this is the standard to aim for...

Whilst we like to remain as unbiased as possible on RedShark, once in a while we see a showreel that really impresses us. The work of Guillaume Juin has featured here before when we showcased his rather wonderful “Astronaut” short back in 2014.

However we recently stumbled upon his 2016 showreel, and what a cracker it is! As a body of work it is impressive enough, but the quality is right up there, and should serve as inspiration for anyone involved in the corporate and commercial sector of production. Even more so because the equipment that Guillaume uses is within the reach of most people.He has very kindly provided us with a breakdown of the equipment and techniques he uses.

Guillaume tells us that his main camera is a Sony FS5, most often affixed to a Manfrotto tripod with a permanently mounted Konova slider rig. For a B-camera he currently uses a Sony A7S, which he uses for Ronin shots, timelapse, and travel. Examples of which can be seen in the Argentina and Indonesia shots in the reel. An A7SII is mostly used for drone shots. We are told that Guillaume uses this on a heavy lifter drone, designed to take cameras up to and including Red cameras and the Alexa Mini. Although he has also used a DJI Phantom 3 for many shots, now recently replaced with the newer Phantom 4. Various other cameras are used when required, such as the FS7, and a 5DMkII for timelapse.

It is also interesting that the lenses used are not expensive primes. A Tamron 24-70mm f/2.8 is used as his general workhorse, with the addition of a Tamron 70-300mm, Canon 50mm f/1.4, and a Samyang 14mm. He attaches these to the FS5 with a Metabones Speedbooster, and a Commlite adaptor for the A7S.

Guillaume always uses Slog with the sharpness/detail set to minimum, and then dialling this back in post production. He primarily edits in Adobe Premiere, using the Lumetri functionality for colour grading. He plays around with lots of different LUTs, with a lot of experimentation with different curves, shadow, highlights, saturation, and hue adjustments. Neat Video is employed a lot for noise reduction, while After Effects is used for composites and effects. One notable shot is around 1’20 into the reel. Guillaume designed and constructed the table himself, and then used video projection film on the glass. Then with a home made mirror system, he projected the animation of the table from below with the use of a wide angle projector. He then spent a number of days in motion design, utilising motion tracking to add 3D holograms onto it.

With all of these shots taken in 2016, this year is already shaping up to be another busy one for Guillaume. If this current reel is anything to go by, I can’t wait to see what he comes up with this year!