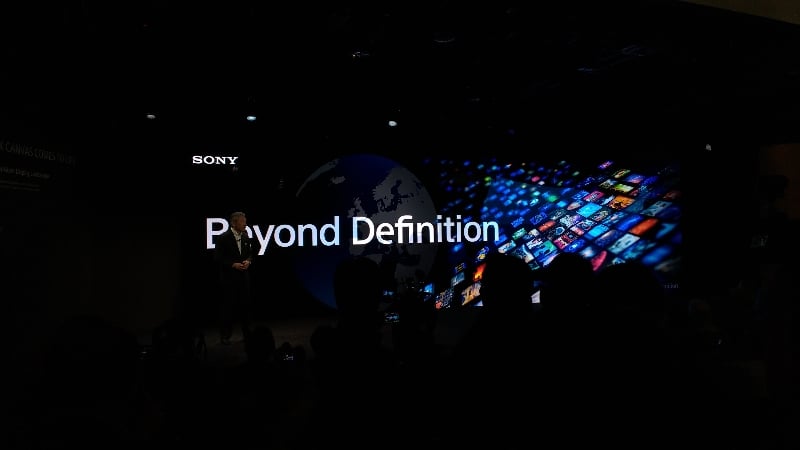 To be honest, this really doesn't do it justice...

Sony has been talking about its Canvas large-scale LED video display surface since at least May last year, referring to it as CLEDIS, for Crystal LED Integrated Structure. It was mentioned only in passing at Sunday’s Sony press conference, which concentrated mainly on the company’s upcoming products, the most interesting of which are probably the live production cameras which support, or soon will support, HDR. More of that to come.

Regardless of anyone’s proclivities towards various types of film and TV material, HDR as a broadcast medium will not succeed as a mass market option without a broad base of support, and that broad base is going to have to include live stuff — sports, particularly — as much as the chin-stroking artistry of single camera drama.

But the star of Sony’s show was the practically Holodeck-level chunk of video pasted across the back wall of its presentation area. There are a lot of very good, very expensive LED video walls up and down the Las Vegas strip and elsewhere, but it’s hard to imagine that any of them come close in sheer perceived image quality to Sony’s effort. It was shown at IBC, although not in quite such controlled lighting environs, and the full capability wasn’t quite so obvious. Given the standard dynamic range nature of most of the internet, there’s no real way of passing on just how good this thing looked, so you’ll have to make do with my verbal overexcitement.

Now, to be completely fair, it would be hard to call Sony’s LED pictures subtle or understated, and some of the stills used in the presentation had clearly been rather abruptly upconverted from standard dynamic range originals, with varying degrees of success. It would be very risky to assume that the display had been calibrated with any goal in mind other than maximum wow factor, with reds in particular seeming to practically levitate in front of the display. Still, that’s more or less the effect that’s produced by a Technicolor dye transfer print (see the opening titles of Funny Girl, projected from film, of course) and it’d be a brave soul who criticized that.

Talking rather unofficially to some people from Christie who said they didn’t have the required media training and therefore couldn’t talk to the press, it becomes clear that the idea of using modern, high-density LED videowalls instead of projection in theatrical exhibition devices is no longer completely ridiculous. OK, it’s still mainly ridiculous, since the cost per foot of diagonal size is vastly, overwhelmingly more than a projected surface, but it has apparently now been done, at Warner Bros. in Los Angeles, for one of their preview theatres.

The advantages of LED are vast. It has the infinite contrast performance of OLED without the limited highlight capability. It is massively powerful; Sony’s display (and those up and down Las Vegas Boulevard) are high power lighting devices, and it’s no surprise to discover that films from Gravity up have been using LED videowalls to produce interactive lighting effects. The best HDR displays currently available are pure LED videowalls; possibly Sony’s technology is the best of these. With the available pixel pitch now falling below 2mm, it’s increasingly feasible to make interior displays (Christie’s 1920x1080 display was only about ten feet across) and perhaps one day all cinemas will use this technology.

Sadly, Sony were camera-shy before the exhibition opened at ten yesterday, but the pictures wouldn’t have done it justice, anyway.