Mad Max Fury Road in Monochrome? Just what is it with Black and White? 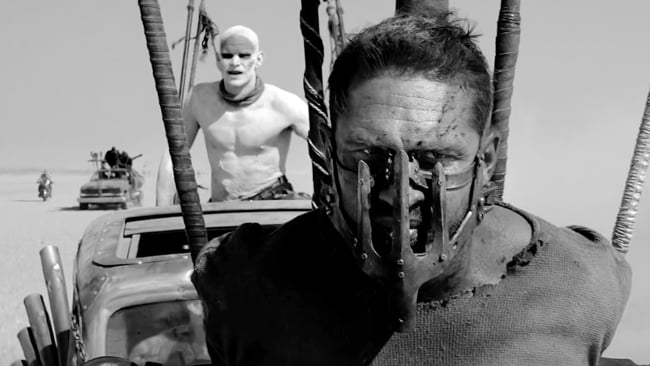 The news that Mad Max: Fury Road is being re-launched in a monochrome version (‘black and chrome edition’) has raised a few eyebrows. The trailer looks great, but what’s actually going on here? Is it a gimmick, or a new trend?

Black and white film is one of those things that came into existence purely out of necessity — colour had either not been invented or was too expensive. Like film grain, the softness and flaring of vintage lenses and the distortion of valve amplification — what was once seen as a limitation or defect — is now regarded as an almost magical quality.

It is curious that as one part of film industry seeks to emulate the world ‘as we see it’ — wider colour gamut, high dynamic range, higher resolution, higher frame rates, 3D, immersive screens, VR — another part wants softness, distortion and mystery. While one group wants maximum control over imagery, another wants to limit the options (great art often comes from struggling against limitations rather than infinite options).

Black and white film evokes many things: seriousness, art, nostalgia and graphic abstraction at the higher end and grittiness, documentary realism, fuzzy obsolescence at the lower. And it has never quite gone away, filmmakers continually rediscover monochrome: Ben Wheatley’s A Field in England (2013), The Artist (2011), Sin City (almost &w) (2005), the Coen’s The Man Who Wasn't There (2001), La Haine (1995), Schindler’s List (1993) - the list goes on.

Colour was once ‘special’, now black and white is. Some movies have used a transition from black and white to colour to go from the drab to the hyper-real: Wizard of Oz (1939) or, more mundanely, Cliff Richard’s Summer Holiday (1963), or the other way round A Matter Of Life and Death (1936). Occasionally, black and white has been used for sequences within a colour film simply because there wasn’t enough light to shoot in colour — If..(1968) — although the critics came up with other explanations.

Once upon a time black and white was cheap. When I shot my first 16mm movie on colour negative the rushes were delivered in black and white — we only got to see what it actually looked like in colour when the first answer print was delivered. But it is a long time since shooting on black and white film was a low-cost option — for movies, it isn’t really an option at all anymore. In the digital age, it is simply a matter of turning down the saturation. Yes, Arri will supply you with an Alexa which only shoots in monochrome (and Leica will sell you a black and white stills camera if you have 8 grand to spare) but you don’t really need it.

Shooting in black and white is an interesting experience: liberating in some ways (you don’t have to worry about balancing colour temperature), hard in others (characters, props and backgrounds can easily merge into the background if you don’t light carefully). You are forced to think of the frame as a graphic image, to add light and shade for definition normally dependent on differences in colour. Sometimes, as an exercise, it is worth lighting using a monitor with the colour turned down, then turning the saturation up to see the result — you may well have produced something a bit more dynamic than if you had visualised it in colour from the start.

I think there is a lesson to be learnt here: watch one of the classic black and white Hollywood movies like Casablanca, The Big Sleep or Psycho, or European masterpieces like Les Enfants Du Paradis, The Battle of Algiers, Alphaville or the magnificent Bengali film Pather Panchali (and if you haven’t seen any of those films — do) and there is no sense of quaintness or nostalgia, no feeling that you are missing out on something because of the lack of colour, no element of ‘something lacking’ because you are totally drawn into the movie.

Great movies have little to do with realism or accurately reproducing the world-as-we-see-it, which is a spurious and hopeless goal anyway. I think HDR is a great development. I can’t think of anything negative about HDR, apart from the problem of shooting in HDR when the film is going to be watched predominantly in SDR, but that's the sort of problem cinematographers deal with all the time. But I don’t get quite as excited about it as some do. It’s not going to make a bad movie any better and great movies will remain great without it. Film is about having something to say and finding a visual language to say it in, it has very little to do with attempting to emulate our eyes.

Shooting in black and white can be great but is no longer an innocent option - it flags you as a stylist, and the audience will want to know ‘why’. But do it well and they’ll stop asking by the end.