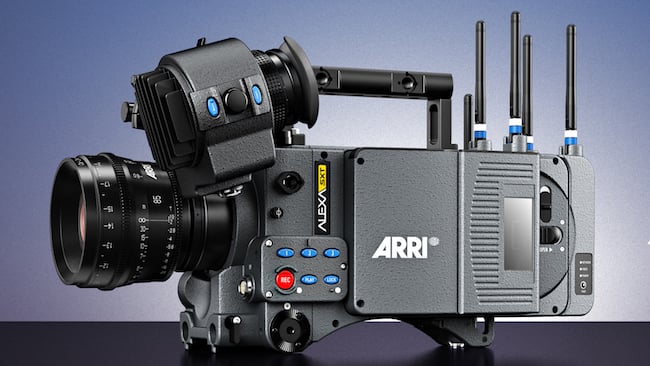 The ALEXA SXT's new wireless transmitter has been designed by Amimon

Cameras needing to be tethered to recording and control devices have always tied a director of photography down which is why ARRI’s move to make the ALEXA SXT the company’s first entirely wireless professional camera system is so interesting.

The venerable brand has integrated a low-latency HD video transmitter and a WiFi radio into the latest digital 35mm ALEXA SXT W model ("W" for Wireless, SXT for Super Xtended Technology). Having a video transmitter onboard makes the camera smaller and lighter than it would be with an external transmitter, and avoids the associated cable problems. Camera setup will be quicker, says ARRI, and productions will be able to move faster, freed of the necessity to route video cables.

The transmitter itself is devised by Amimon, most renowned for its Connex HD wireless box. The latency is not divulged but since we’re dealing with HD here (the camera upscales to 4K UHD in ProRes) Amimon’s broadcast applications operate with a delay of milliseconds.

According to ARRI’s ALEXA product manager, Marc Shipman-Mueller, the ALEXA SXT W is only the start of the company’s wireless capability. In fact, it is announcing a complete ARRI Wireless Video System (WVS), of which the SXT W is a part. Other pieces include a stand-alone video transmitter for use with other cameras such as the ALEXA Mini, and a separate video receiver.

The onboard wireless video system works with ALEXA SXT’s other radio-based offerings – the WiFi and ARRI’s proprietary camera and lens control system - to eliminate interference.

The integrated WiFi radio alone opens up a veritable box of delights including remote colour management and remote control via the ALEXA Web Remote. ARRI teases with the suggestion that further WiFi options are in the lab.

It’s worth noting that ARRI is retiring the ALEXA SXT Plus and ALEXA SXT Studio models in favour of the new arrival.

No word on price either, although the Plus version would cost you about the same as the new Range Rover Velar – around £80k and change. Presumably, the new version will be lighter too. The SXT Plus body with PL mount electronic viewfinder and all the trimmings came in at 8.4kg/ 18.6 lbs.