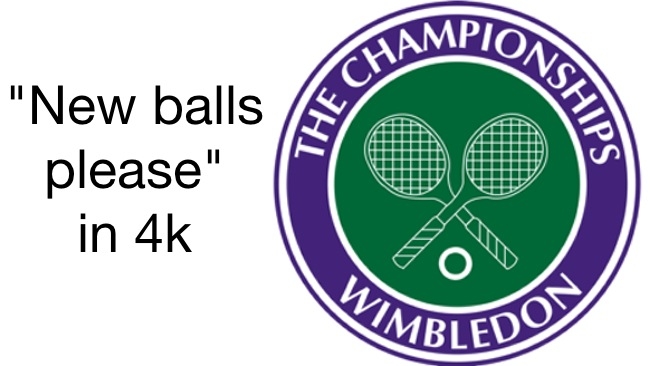 4k coming to the All England Championships

Exclusive: Red Shark understands that the BBC is looking quite seriously at capturing this year’s Wimbledon tennis championships in 4k.

The BBC has a bit of a quiet reputation for pioneering work in sports broadcasting. The 2008 Six Nations rugby match between Scotland and England was the first live sporting event ever broadcast in stereo 3D (albeit only to a select cinema audience) and, of course, it was intimately involved in the 8k tests at last Summer’s Olympics.

Capturing the Wimbledon Championships in 4k would make perfect sense too as, in a separate deal, Sony is a long-term technology partner of the All England Lawn Tennis Club and has used it as a test bed for numerous broadcast technologies over the past few years, from stereo 3D to its 4k PictureStitch technology.

Of course, a broadcast outlet for a 4k signal is extremely unlikely, with a feed more liable to be used either in cinemas, Sony stores or just as a technology demo if used live at all. Nevertheless, given the global profile of the tournament, it’s an important step on 4k’s journey to the mainstream.

Oh, and to give the story even more weight, SIS LIVE, the OB company that the BBC tends to use more often than not, released the news on 15th February that it is actively investigating 4k via the Sony F65 too.

"SIS LIVE has put together a working group to explore the technology and workflows required to deliver live, 4K, multi-camera event coverage from an outside broadcast unit, culminating in a field test at St James’ Park on 2nd February," said a statement.