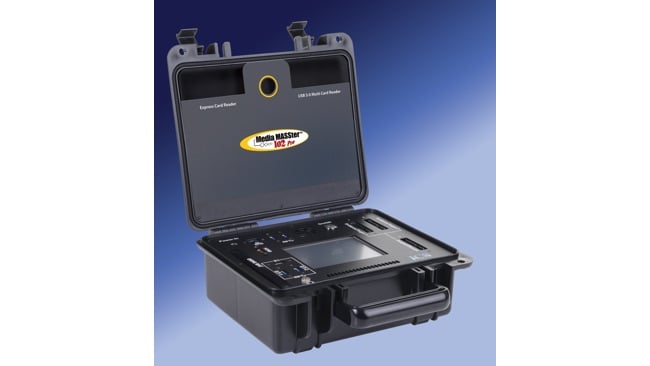 JMR's new ICS Media MASSter 102 promises the sort of ruggedized, portable data duplication system deigned from the ground up to survive life on set, not to mention the ability to duplicate 1TB in less than 50 minutes.

This is one for anybody who's been in the unfortunate position of standing in a field, holding a laptop in one hand, an umbrella in the other and wondering if it's possible to use a trackpad nasally while an unfortunate hard disk dangles from a USB cable. This is a big enough problem that we're covering a press release in a way we don't often, although there should be an opportunity to look more closely in Vegas.

JMR's expressively-named Media MASSter is a device in what looks like a rugged, waterproof plastic case designed to deal with the work of reliably duplicating and backing up camera original material. Traditionally, this is a task which has fallen to a person with a MacBook on a magliner with an artistic pile of Thunderbolt cables. It’s an approach which works well in the controlled and (comparatively) de-stressed environment of a large-scale production.

It works markedly less well in coarser conditions, something that JMR seem to have experience with, having a history of manufacturing portable systems for markets such as forensic investigation and defence. It's a niche area, often demanding something more than a laptop, but not quite a server in a rack and with a particular requirement for external devices (such as card readers) to be securely stowed both for transport and while in use. The company seems to understand this, specifically describing the device as “cable-less” and having specified a touchscreen interface.

To confront the inevitable, this is fundamentally a Windows PC built into a case. As such, it lives and dies on its software, something we can't really get into without having performed a proper review, but the right noises are being made. There are encryption and hashing functions — much as the idea of encrypting camera original material might be held to be a bit risky — and a write-protected viewing option to allow material to be viewed without creating any risk of it being damaged. There isn't any discussion of proxy generation, but being a Windows PC, it'd probably be quite feasible to run third-party encoding tools. The spec of the underlying computer is not discussed, although one would hope for something fairly reasonable as even duplication on this scale can be reasonably hard work. Hardware-accelerated hashing and encryption, of certain types, is mentioned.

Either way, this all makes a lot of sense. Various people (including your narrator) have built various pieces of equipment into various cases for just this sort of application and the regularisation of the process by a company with some experience in the field should make for a reliable and useful system. About the only issue is the inability to run the popular DIT application Silverstack, but that's much more a question for Pomfort who have not chosen to produce a Windows version of their product.

JMR's Media MASSter is to be shown at NAB; we'll take a closer look there.