On the road with a TouchBar Macbook Pro, Resolve and a G-Technology Thunderbolt RAID 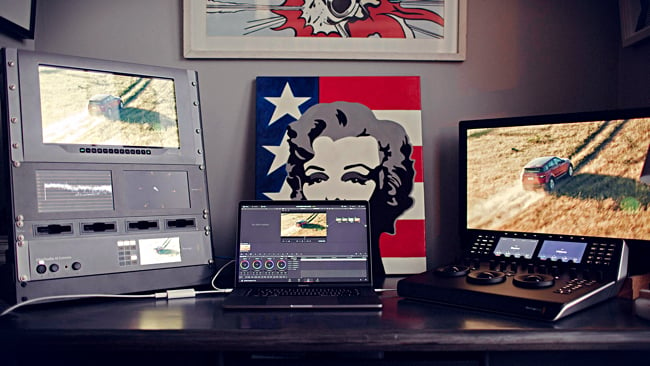 I've been travelling with some of the latest tech, including a Macbook Pro with a touchbar and Canon C500 (and now a C700). By Brett Danton

Last year I travelled 250,000 miles for work, directing commercials ranging across budgets. On my recent test of the Blackmagic Resolve mini-panel, I wanted to take it a step further and also look if the new MacBook Pro would speed up my travelling life, workflow and reliability along with an upgraded Thunderbolt RAID from G-Technology. At the moment, I am using a maxed out early 2016 MacBook and a Thunderbolt 1 RAID.

When on the road, my workflow varies from a rough edit, sending the facility an EDL to edit RAW files from a C500 (and now a C700) and grade in Resolve. Over the last three years, I have been using a Blackmagic portable setup for a 4K workflow, which I upgraded when a newer Thunderbolt version came along. This is used for file checking and building a look. Often I set up in my hotel room or client’s office for edit and sometimes grade. It comprises of a Blackmagic Ultrastudio 4K for image-out,  a Smartscope duo 4K for Resolve, Multidock for SSD-drives for backup and downloading RAW from the Odyssey 7Q and transport SSD’s, Terenex mini 12g to quad-SDI for linking the monitor and a Canon 24in reference monitor, which gives me a 4K debayered image live from the camera when shooting.

I am a firm believer in using the same monitor — you get to know it and how the image will read. This setup has worked seamlessly for a 4K workflow with a full 4096 DCI image. I have edited — and sometimes graded — many broadcast commercials and a few have won awards in cinematography from the ACS, which is not bad using a laptop. I might not get a seamless playback, while render times are longer than desktop, but this gives me a complete mobile solution I can tinker to my heart’s content. Everything from Blackmagic has been rock solid. Each firmware update has improved usability and speed. Only once did I have problems when for some reason after an upgrade it would not playback 1080 footage.

I travel with the RAID for several reasons, shooting in 4K RAW for file transfer, file transport and editing on the road. I tried a 1080 workflow with proxy back to 4K but always seemed to have problems. In my opinion, the camera is shooting 4K and I want to use the media it generates for the best possible grade, so transcoding is not an option for me either. I have started shooting with the Canon C700 recently, using the Codex recorder and to give you an idea: with a 1TB Codex drive, transfer to a standard single-disk Thunderbolt drive takes around 2.5 hours. The six-drive RAID I tested took 22 minutes.

To transport my original Thunderbolt drive I had a road case built, but it still felt vulnerable and was a pain to handle without grips once out of the case. The first thing that struck me on the G-Technology G-Speed shuttle XL that I was trying was the case and built-in handle. It felt like something I would have on set, rugged with quality components; a professional piece of filmmaking equipment that gives you a sense of reassurance just from its build quality. I did not have the optional case which comes in two flavours, but would certainly get it for transport. It’s a great idea and with the drive not being too heavy, makes it easy to handle.

The drive mounted quickly and compared to my original RAID, I found the G-Technology quiet, with no problems at home on a desk and a low fan noise that’s not intrusive. Over the three weeks, I used the RAID for numerous tasks on 4K edits, including files generated from a C700 in a 4K DPX workflow playing back in Premiere CC. It achieved a real-time 25fps playback through the entire system and viewing on the external monitor. My old Mac and RAID could never have done this. It was also capable of playing the RAW files without the need to render in Premiere. 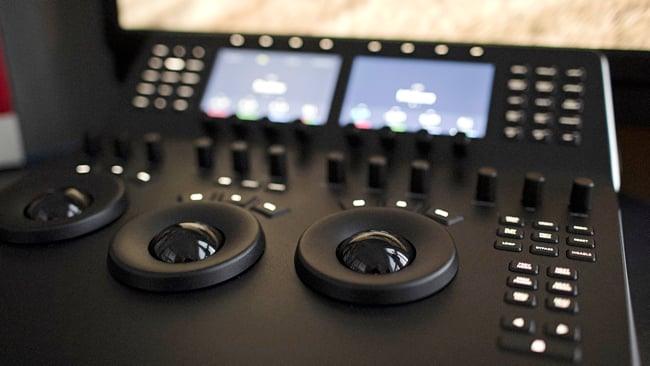 When I do render previews in Premiere, I use a Quicktime 422 LT — I even got playback in Resolve real-time for footage previews and once cached could play graded footage until I started to add multiple nodes and effects. I've always struggled with Resolves’s rendering of timeline clips and workflow, which is one of the reasons I still edit in Premiere. The drive always woke from sleep quickly and not once did I have un-mounts, file errors or crashes.

You can read specs and speeds all you want, but unless you try it in the wild I don't think you really know what it will do. It revolves around personal system setup. What I can say with this RAID over the previous is that it was substantially faster. The version I had also contained two device slots that could be used for a transport disc, card reader or red mag, which I think is a fantastic feature. Anything that removes the clutter of cables and additional docks is great, especially when travelling.

What I would really like is a Codex dock. I’m sure the Arri Raw and Panavision RAW shooters would be the same. My other thing would be a front port for the Thunderbolt. Often we make multiple copies when shooting or transport for off-site storage and the drives get provided. It would just be easier than fiddling around the back — it’s not a big thing, but it would be nice. The other is when or if the drive gets upgraded to USB-C, it’s a powered connection to recharge the laptop. I can say I am a G-Technology convert now, having never used one before.

The final thing in this mobile setup I tried, was the 2017 MacBook Pro with Touch Bar. Currently, I’m using a 2016 pre-Touch Bar and really did not see a reason to upgrade. I'm going to admit I went into this with a slightly bad attitude, having owned a Mac since an LC11 running Photoshop 1 that cost the same as a car. Having never used a PC, I recently even thought about swapping camps. With Apple’s complete, in my opinion, disregard to its original core creative clients I really started to dislike where they were heading. I want a creative work machine for my business, not a watch. If I want a watch, I’ll get a proper watch; a Swiss chronograph that can be a family heirloom.

The machine I had was a top of the range processor, but not graphics RAM. My first impression was that it had a nice design, not groundbreaking, but improvements in all areas, size, weight and feel. What I really liked was the keyboard. It took a little bit of time to get used to the smaller return key but I’m through that now. The larger trackpad is really nice, gave more control and less reach to access. Battery life seems to be far better than the 2016 and the fan runs far less. I use computers on flights often and this feels good on my lap.

To be honest, the Touch Bar I could take or leave, but maybe with time, I will start to use it more. I’m so used to keyboard shortcuts, it didn't come into play for me. What did surprise me was the fingerprint recognition for passwords and unlock. My preconception was that it was a gimmick, but I really liked it and it was useful.

What I wanted was a faster workflow and that it delivered. Render time was faster and I had far less stutter playback issues. I was never happy with the playback of Quicktime on my 2106. It always felt it had jitter, but this machine has none of that. All the applications felt more responsive under load, Resolve often came up with the message “Out of memory” on my 2016 model, especially with many nodes, but even under some complex grades and noise reduction I never saw this on the 2017 model.

The other thing that really stood out is that this machine feels stable. During three weeks of heavy processing use, I have not had a software or system hang — that’s a first. The final question for a lot of people are the USB-C ports. Well, I'm now a convert to that. Finally, everything fits into the same socket. Power drives, devices; I don't have to stretch a lead across the desk because the port is on the wrong side. It might be a little annoying to start with, using adapters or docks with older plugs, but once everything moves across and you update those drives, I don't think you would look back. I thought, when I tried this machine over my 2016, it would not be a big difference, but now I don't want to hand it back. Apple has pulled me back and although they are still in my bad books, this machine has renewed my faith.

What I have listed is a portable 4K production setup that works for me, on set, in a hotel room and back at home. You might need something different or custom to your needs, but with this equipment I have to make a living using it, pay for my life and family. I am a fanboy of all the above because it lets me do that and the updated devices have improved how that happens I would say quite significantly, along with clients that can see the difference in results.

Update - I had initially borrowed the 2017 Macbook with Touchbar from Jigsaw 24 for a series of reviews. I didn't give it back. I bought it from them.