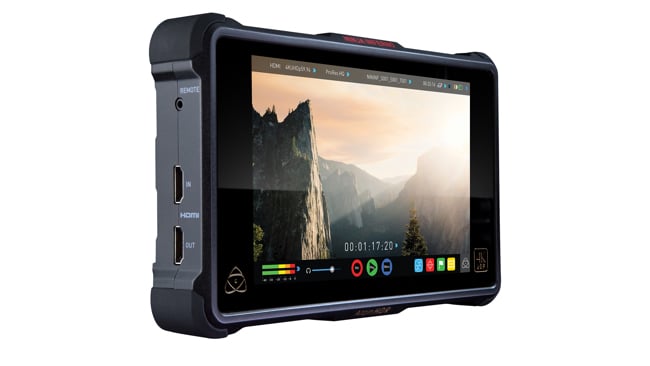 The new Ninja Inferno: Unlocking top-range capabilities of the GH5 for $995

With pre-orders for the Panasonic GH5 now shipping, it’s no accident that Atomos is making its new HDR-capable Ninja Inferno, which unlocks the full 4:2:2 10-bit capabilities of the camera at 4K 60p, available with immediate effect.

Atomos’ latest HDR Ninja is a new HDMI-only 4K DCI / UHD recorder that can record ProRes or DNx at up to 60p and also provides professional XLR audio I/O via an optional breakout cable.

Essentially it upgrades the GH5’s 4K 60p recording options from the internal 8-bit 4:2:0 Long GOP to 10-bit, 4:2:2, ProRes/DNxHR, thus making an already hotly anticipated camera even more useful at the pro level. And what’s more it does this at an extremely competitive $995, that’s $1000 cheaper than the company’s flagship Shogun Inferno.

Atomos, of course, has a bit of a history of this. The first Ninja gave ProRes capability to the 5D MkIIII and the original Shogun was instrumental in helping 4K take off on the a7S and the GH4. All the same, providing that much new capability for the GH5 while simultaneously ducking under the $1000 barrier feels like a whole different ball game.

3D LUTs for preview & burn in

On screen Editing and playlist creation

As already said, availability of the Ninja Inferno is immediate. UK pricing is listed as £875.

It’s also provided Atomos with an opportunity to cut the prices on all its HDR range. Admittedly to fund the price cuts the company has calved off a lot of the accessories that the used to ship with into a separate pack, but it does mean that you can get your hands on a Shogun Flame and Ninja Flame for $995 and $795 respectively (both models ship with mains power supply, recording caddy & travel case, while the Shogun Flame also ships with an XLR breakout cable).

“Our message to video Pro’s is to Go HDR 4Kp60 Today showcased by the GH5 and Ninja Inferno combo”, said Jeromy Young CEO and co-founder of Atomos. “For less than $3k it’s an unbeatable total package especially when considering having 4K HDR content ready for clients, Netflix and YouTube is a must”.

Atomos has always led the way advancing the quality, affordability and simplicity of filmmaking by adding professional features to popular Japanese cameras. Atomos are again first to launch a portable HDR 4Kp60 10-bit 422 monitor recorder. Timed with the release of the powerful Panasonic GH5 and a $995 price point Ninja Inferno empowers the masses.

Apart from being an obvious companion for the new GH5, the Ninja Inferno is the world’s first HDMI monitor-recorder to accept 4K DCI signals from cameras like the Panasonic GH4 / DVX200 / HCX1000 / UX180 / HCX1, Sony FS7 / Z100 and the JVC LS300. Support for the 4096 DCI standard unlocks cinema recording from these 4K video & mirrorless DSLRs.

For the Ninja Inferno, like its flagship sibling the Shogun Inferno, we have created the ultimate monitor through end-to-end custom engineering of all components. It starts with a 1920x1200 resolution LCD panel and add 10-bit processing in highlights and equivalent 10+ bit resolution in blacks. This is achieved through the patented AtomHDR engine which when combined with our custom Atomos-built backlight allows the power of 1500nits to be utilized for High Bright Rec709 or HDR PQ/HLG at 10+ stops. The full-size HDMI 2.0 connection bypasses the camera’s internal limitations by recording to 4Kp60 4:2:2 10-bit pristine video in grading-friendly Apple ProRes or Avid DNxHR. The Ninja Inferno upgrades mirrorless and DSLR camera audio by including balanced XLR input and 48V Phantom Power, negating the need to purchase separate audio recorders. For on set review, the wide angle 7” calibrated screen, playback controls, playlist and XML tagging make the Ninja Inferno the perfect client or director’s monitor, with playout to the latest HDR PQ/HLG or SDR TV’s. The Ninja Inferno is equally adept in the editing suite as it is in the field with the recorded files dropping directly onto the timeline of all the major NLE editing and grading software with the HDMI input capable of accepting HDR signals to make the Ninja Inferno an unbelievably affordable HDR reference monitor for portable or in studio color grading.

The Ninja Inferno, which is shipping now for MSRP $995, is the ultimate camera accessory for the GH5, the popular Sony FS7 or cameras with 4K DCI output & other 4Kp60 / 4Kp30 / HDp60 cameras looking for a future proof monitor-recorder.

HDR now comes free across the Atomos 4K Line-up
Timed with the release of the Ninja Inferno, Atomos have driven down the price of the existing line-up, passing on the volume savings they receive due to the popularity of the entire HDR range. The Shogun Flame and Ninja Flame are now $995 and $795 respectively (both models ship with mains power supply, recording caddy & travel case. The Shogun Flame also ships with an XLR breakout cable). To complement all models in the line-up, Atomos have developed a tailored Accessory Kit and Power Kit that arm users with everything needed to power, control, dock, charge and safely carry the units at an amazing price. The flagship Shogun Inferno continues to ship as is today.