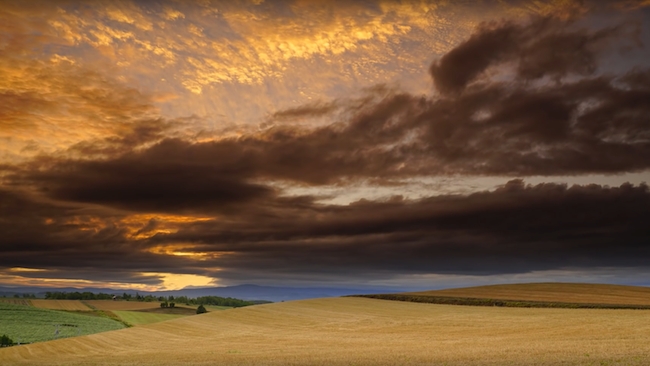 Impressive what you can do when you can split the image into sectors...

Sony’s new Digital Filter app emulates the behaviour of a graduated ND filter, allowing the user to set different exposure compensation values for each of three horizontal bands across the image.

Digital filtration has traditionally been capable of doing a lot less than real glass filters, mainly because by the time the computer gets to work on an image, many of the problems that filtration attempts to solve are indelibly baked into the data. That's particularly true of things like graduated ND and colour-correction filters, where completely full pixels can't be recovered simply by reducing their brightness. It's also a factor as regards things like flare and mist filters, which react to very bright highlights in a way that can't be accurately simulated if, again, the high-brightness areas are hidden in clipping.

This situation has improved with the development of log workflows, where the recorded image contains more brightness information than will be delivered to the viewer, but a log recording still has limits – and with the advent of HDR, we no longer have as much spare information as we did before. For all these reasons, optical filtration is likely to remain a factor for the foreseeable future, although innovations in the way imaging sensors can be controlled seem likely to make some interesting new techniques available.

One such technique is Sony's recently-updated digital filter app for its Alpha-series cameras. Because it's a piece of software that runs on the camera (which is a recent enough innovation in itself), the program can exercise much more direct control over the way the image is acquired. This is much more powerful than simply processing the data after the fact, even if the scene was shot raw, an approach which offers many of the same advantages as shooting log for motion picture production.

The exact implementation details of this are a matter of conjecture. A while ago, the Magic Lantern people discovered that it was possible to independently configure the gain of the two analogue amplifiers on the sensor of at least one Canon DSLR. This discovery was used to implement an experimental HDR mode in which alternating rows of pixels were output with different amplification, and the resulting data interpolated to create a full-resolution image with considerably extended dynamic range.

Given the well-known aliasing and scaling problems on early video-capable DSLRs from Canon, on top of the issues of interpolating out alternate rows of pixels on what's already a Bayer mosaic picture, the results were not particularly wonderful. What's important, though, is that it demonstrated what could be done with a fairly granular level of control over the behaviour of the sensor and its analogue electronics.

Whether Sony's app does something similar isn't clear, but it wouldn't be too much of a stretch to assume it did. To some extent, it's an attempt to grade (stills) in camera, and in the film and TV world, on-set grading can become a terrible time sink even if there's a person dedicated solely to the task. Still, since the vast majority of video is still shot in Rec. 709, and since that implies an awful lot of in-camera pseudo-grading that's pretty much fixed and automated, making this sort of thing available to motion-picture photographers might be useful at least sometimes.

There are things this sort of trick can't give us. Glow, flare and mist filters have behaviour that's potentially affected by the tiniest pinpoints of light. If anyone had the ability to make cameras which adjusted the gain of the sensor automatically, on an individual pixel basis, to maximise dynamic range, then we'd be excited about it for any number of reasons. Unfortunately, nobody does, at least not for film and TV work, at least not yet.

In the meantime, the ability to perform exposure compensation in camera, differentially, over three nicely-blended regions of the image, might make it slightly less necessary to carry ND grad filters.

The app seems to be impressively hard to find on the interwebs, so here’s a link. Video demo below.