Replay: Eviscerating optics. People get very fixated on lenses: certainly they’re probably the single area of broadcast kit that has held its value the most during the Great Move to Digital. Perhaps that’s why Matthew Duclos’ new series of lens teardown videos, 'Lens Guts', is quite so compelling. 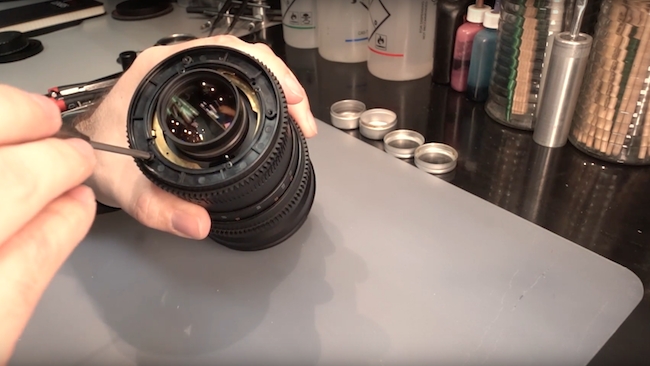 There's little doubt that the lens is one of the most significant instruments in a filmmaker's arsenal. In the digital age when many cinematographers are reaching for the same tools, we can start to see an homogenized look to many projects photographed with the same hardware. It is the selection of the lens and the unique character and personality that it brings to the image that separates one artist from another.

While we've all worked with lenses, few of us have ever had the opportunity to look inside these marvels of optical magic to get an idea of what makes them work. Matt Duclos of Duclos Lenses is one such brave lens pirate (or maybe lens surgeon is more apropos) who makes a living diving deep into the most advanced optics in the world to modify or repair them and send them back out to create beautiful images.

In a new video series from, Matt cracks open a Rokinon 35mm Cine DS lens and walks the viewer through it, literally, element by element. It's a wholly unique form of "unboxing" that, if you're a lens geek, is as thrilling as the latest episode of Game of Thrones, sans dragons. Even if you're not a lens geek, it can be fascinating to get a clearer picture at the complex optical and mechanical marvels that are modern lenses.

Check out episode 2 of Duclos Lenses' ‘Lens Guts’ below. Oh, and by the way, needless to say don’t try this at home.