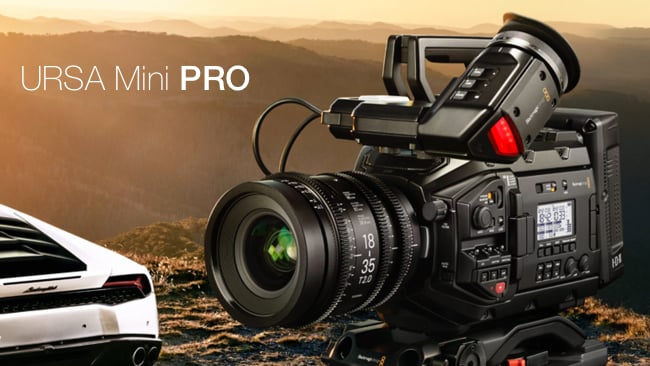 The powerful new $5995 Blackmagic URSA Mini Pro takes all that was good about the original URSA Mini and builds on it with dedicated controls, a truly interchangeable lens mount, integrated ND filters, and a good deal more - and it's shipping immediately.

It was clear from the outset that BlackMagic’s URSA Mini is the basis for a wide, deep and long-lived camera system. A stable platform that can be upgraded an iterated upon - particularly in response to customer feedback and requests. The cameras are available with a raft of accessories including a studio viewfinder that transforms the Mini into a formidable live video production tool.

Here’s a reminder of the camera’s essential attributes, most, of course, inherited from the predecessor, the URSA Mini.

The camera comes with a 4.6K (4608 x 2592 pixels) Super 35mm sensor with 15 stops of dynamic range and a wide colour gamut. It’s always difficult to be precise about dynamic range because it always has to be weighed against noise performance: essentially how much noise is acceptable. So any two assessors might come to a different conclusion. From what we’ve seen, though, the camera does indeed have an impressively wide dynamic range, so this claim seems reasonable.

Blackmagic Design’s colour science is improving all the time, and generation three is included with this camera. HDR? Any camera with this dynamic range is capable of HDR and the URSA Mini Pro claims to have rec.2020 - a standard that requires HDR performance.

If you’ve never held one, URSA Minis are tough. They’re built to take the kind of knocks that come with professional use.

The URSA Mini Pro addresses some very specific customer feedback, adding features that will make the camera an even more obvious choice at this price level.

Let’s have a look at them one by one:

Touchscreens are all very well, and they make a huge amount of sense not just for lowering the cost of a camera, but because the user interface can adapt and grow to keep track with camera upgrades. But for professionals, there’s no substitute for physical controls. So the more commonly needed ones are duplicated in physical form on the new camera. Which will mean that most of the time, there’s no need for the operator to even take his or her eye from the viewfinder: it is, apparently, very easy to learn the positions of the controls on the new camera.

All these controls are fully redundant, in that should any fail during a shoot, their equivalent functions are available in the touchscreen menu.

What might have seemed a good idea at the time (I thought it was, for a while) was to hide the on-off button underneath the flip-out monitor screen. In day-to-day use, this was seen as a nuisance. You can now turn the camera on and off without having to swing the screen open. This may seem like a small point, but it isn’t for users, and it certainly shows the Blackmagic listens to its customers.

These were notably absent from the original URSA Mini, and it’s great to see them included here. There are four levels of NDF if you include zero. You can mechanically swap in 2, 4 and 6 stop filters, and this will give users the versatility to work in a wider range of lighting conditions with all the creative options (like shallow DOF) that having such control brings.

While SD/UHS-II cards aren’t as fast as CFast, they’re loads cheaper and this is certain to be a popular enhancement. Incorporating the cards has involved moving the CFast slots slightly but overall, they don’t take much additional space. The same continuous recording as with the CFast-only URSA Minis is available with SD.

With the right SD/UHS-II SD cards, speed is only an issue for raw 4K recording. You should be able to record ProRes Ultra HD or raw HD files.

This feature alone is going to transform the economics of the USRA Mini system.

An EF mount is provided as standard but PL and B4 mounts will be available as options. There's also going to be an F-mount (Nikon) adaptor with a clever mechanical iris control buit in to the mount. This won't be available until the middle of the year but clearly exists now as a prototype.

Finally - a complete surprise from the press conference - and if I heard it correctly - Blackmagic has a SSD recorder that will fit onto the back of the camera. Being able to record in ProRes and raw direct to an SSD is obviously going to massively lower storage costs. It connects using the 12G SDI output. Blackmagic is also going to try to make this work with existing URSA Mini models, but this is not certain as there is still work to be done to make it function properly. This won't be out until later in the year.

Blackmagic has today announced a new software update for version 4.3. It is only for the URSA Mini Pro 4.6K, Studio camera 2 and Studio Camera 2 4K.

We think this is a good and sensible move by Blackmagic. The original URSA Mini is is a great design and a seriously good option at this price level. By making these changes and additions, Blackmagic has shown that it listens to customers, and, as a result, has made a much better camera. Is this really a new camera? Yes, I think it is. The addition of all these controls and the thoroughness that has (for example) gone into the interchangeable lens mount system justifies the term "new". This line of cameras is getting harder to beat.