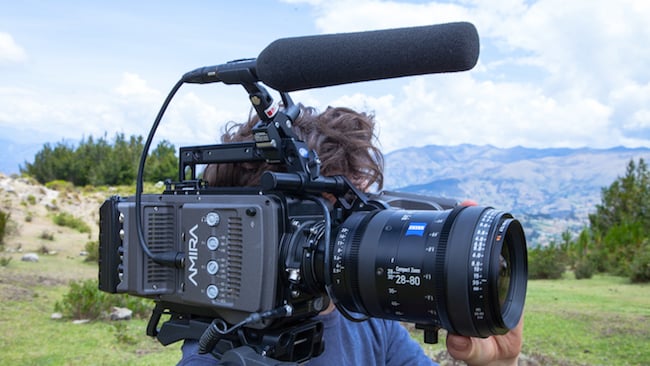 Cameras keep getting better. This is a good thing. It means that high quality cinematic cameras are available to more creative people than ever.

Digital video cameras are now so good that they need incredibly fine lenses if they’re going to be able to produce the best pictures. But lenses don’t get cheaper just because cameras do. Far from it. Lenses are complex to design and manufacture and the same rules that have always applied to optical physics still apply today.

It’s with this in mind that ZEISS has designed the Cinema Zoom CZ.2 lenses. These lenses will work superbly with today’s 4K and HD cameras, and be ready for the almost inevitable future when 8K acquisition is widespread.

There are so many things that have to be right about a lens. Above all, perhaps, is the look.

The “look” of even the best camera in the world is always going to be determined by the characteristics of its lens. There is no way round this. The camera doesn’t see the world: it sees the output of the lens.

The ZEISS Cinema Zoom lenses have a look that matches the very highest quality cinema primes - and this includes all ZEISS/ARRI lenses. There are other important factors: like constant aperture throughout the zoom range as well as excellent sharpness and contrast.  They are also colour-matched to ZEISS’s Ultra and Master prime lenses

What does it mean to say that a lens is 8K capable?

It’s a very good question, because the term 8K refers to a number of pixels, but lenses don’t have pixels at all. Here’s what it means.

8K video has as more pixels than most still cameras are capable of shooting. It has twice the linear sharpness of 4K and four times the sharpness of HD. That’s asking a lot of a lens, which has to be capable of resolving objects four times smaller than if you were shooting in HD. That’s calls for an incredible uplift in lens performance.

So while when ZEISS says that a lens is capable of 8K performance, it has nothing to do with pixels, it does mean that if a camera’s sensor has 8K pixels, the lens will make the data from each of those light-sensing elements meaningful and capable of being different from each other. To put it another way, the resolving power of the lens matches the resolving power of the sensor.

In addition to a high-end look and extreme optical performance, the ZEISS Cinema Zooms come with the following features:

Lenses are a great investment and should last a lifetime, but if they only work with a single lens mount, your choice of cameras in the future is restricted. The ZEISS Cinema Zoom lenses, as well as the ZEISS LWZ.3,  have an interchangeable lens mount system that can be switched easily by the user between PL, Canon EF, Nikon F, Sony E and Micro Four Thirds.

Full Frame coverage (24 x 36mm) means that the image circle from the lenses covers the entire sensor in most Super 35 and Full Frame sensor cameras, with no drop-off or vignetting towards the edges and corners. Here are some examples of cameras that will work well with the new lenses:

With Super 35 cameras, the lens’s image circle will be bigger than the sensor, but the highest quality part of the image (the “sweet spot”) will be fully captured.

There’s no visible focus shift, no ramping and no visible breathing throughout the focal length. This makes dynamic shots easier to capture and simplifies virtually all setups.

Shallow depth of field and out of focus backgrounds looks best with a round iris, giving an “organic” look to the bokeh.

Clear, calibrated focus scales and nearly 300 degrees of focus rotation make it easier to focus accurately, increasing the chances of getting the shot first time.

A robust cine-style housing and outstanding built quality means that these lenses are built to last.

Behind the Scenes of Zburbs with ZEISS Compact Zoom CZ.2 and the Pansonic LT