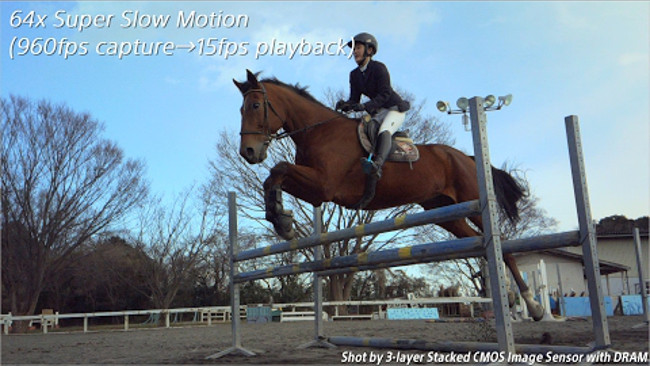 High speed mobile: Sony has incorporated some very interesting features into its latest phone camera sensor, but will this technology (and the accompanying high frame rate capture) make the jump to Sony's professional camera lines?

At the 2017 International Solid-State Circuits Conference, Sony announced a new CMOS sensor that incorporates a 1 GBIT DRAM buffer onto a back-side illuminated sensor, enabling a faster readout, boasting frame rates of up to 1000 frames per second in HD.

In addition to enabling very high frame rates, this also eliminates rolling shutter artefacts simply as a result of reading out the sensor's full resolution of 19.3 megapixels in 1/120th of a second. There's even a feature designed into Sony's new phone that will autodetect high speed action and ramp up the frame rate to capture the fast action in slow motion, so that the user doesn't miss capturing a fleeting moment.

The sensor's resolution is pretty high for its size at 5520x3840 and the entire sensor itself is just 1/2.3 inches; that leads to pretty small pixel pitch, so it's not likely to be competing with the professional gear in terms of dynamic range. Since most people using cell phones to capture video aren't nearly as concerned about dynamic range as people using professional cameras are, Sony probably doesn't feel that it's important to this sensor's target audience and is probably correct.

There is one other significant benefit from having a large DRAM buffer built into the sensor, which is that the data rate from the sensor to the rest of the camera doesn't need to change to support high frame rates. Using this sensor doesn't require simultaneously upgrading the image processing hardware. That should make adopting this technology easier.

Previous cell phone cameras that Sony has made have been impressive for cell phone cameras, so it's stands to reason to expect that this one will deliver significantly better image quality than its diminutive size would lead one to expect.

That said, it's not likely to give professional SLR and cinema cameras any real competition in technical terms. Sony also doesn't say what bit-depth it records stills or video in or what codecs its new phone supports, though the press release does indicate that it captures Bayer pattern raw. That's most likely only for stills, as most phones will probably continue using high compression ratio codecs like HEVC and H.264.

The more interesting question about this is whether or not it's going to make its way into higher end sensors. Sony introduced back illuminated sensors in cell phones and later incorporated that technology into its A7 line. Sony hasn't thus far announced any such plans, but that doesn't mean that it won't happen. If it's successful in cell phones, then the large cell phone market will help to recoup the costs of developing this sensor, as well as offset the cost of developing a larger version for its higher end camera lines.