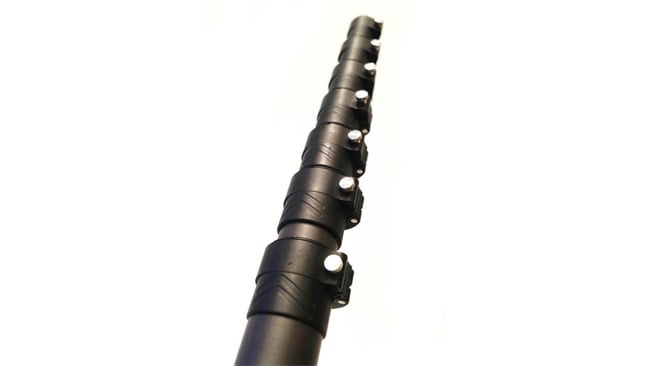 Pole dancing: The Charters Pole will hoist your camera aloft up to 8 metres

If you don't have the touch to shoot aerial cinematography with a drone, or are too worried about it crashing or flying away, you can still get a decent birds eye view shot thanks to the Charters Pole, which can loft your camera as high as 6m (20 feet).

Developed by famed New Zealand cinematographer Rodney Charters and infamy on general sale in the past few weeks, the Charters Pole is an 8-section, retracting pole with easy to use click latch that can extend from 1 to 6 meters. Charters designed it to be used with lightweight camera systems, boom mics, and even LED light panels where you need to get your gear high above you without hiring a crew to erect a heavy and expensive Technoframe or fly a drone to get a similar shot.

“It opens up a whole new world of seeing,” says Charters. “Not a drone, but towards a drone for the first twenty feet, all kinds of new angles become very accessible. It's a great multi-purpose pole.”

Charters got the idea after using expensive carbon fiber boom poles and placing a camera on the end to get a higher shot. But he found that the cost and locking designs were lacking and so he set to designing something that will fill a void between a camera crane and a drone.

Charters cautions that expanded to it's full length, with a camera or other equipment on it, it can weigh quite a bit, and operators need to be mindful about where they place it, especially when around power lines or up on high, where it can hover over others.

But the weight limits are far outweighed by benefits. “We tried it on a show I was shooting on, and found that we wanted it around all the time,” Charters said. Charters also likes to use it with a DJI Osmo handheld gimbal, in order to have remote control over the camera, but any lightweight camera can be affixed to it, including a GoPro.

“The smaller size of camera and the boom action allow you to be inside a character’s personal space,” Charters adds, “physically passing by someone inches from their ears. Generally our camera systems are so large that you couldn’t get that physically close to an actor.”

The Charters Pole comes in two configurations, a 6m Production model with a 1m closed length, and a 4.35m compact model which enjoys a 80cm closed length. It is built with lightweight carbon fiber that is ribbed for easier grip, with optional accessories for mounting cameras, lights and mics with greater stability. It also comes with a small ball head, to mount them, as well as a 3/8” to ¼-20 adapter, and a smartphone mount for seeing what the camera sees remotely.