New ways to move your camera 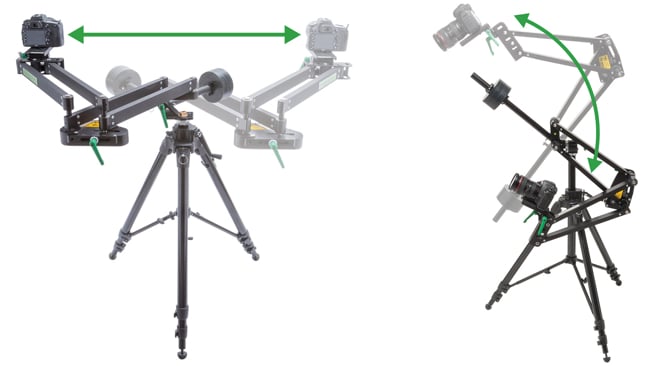 Part of the movement range of the ingenious C-Pan Arm

RedShark Review: The Danish designed and built 9.Solutions C-Pan Arm is an ingenious way of moving a camera.

Although not the easiest thing to describe, the design is simple and elegant in practice. Perhaps best thought of as a cross between a slider and a jib arm, it consists of a scissor mechanism that folds in the middle. One end of the scissors mounts on a tripod, while the camera is mounted on the other end. The camera is counterbalanced by a rod which takes (supplied) dumbbell weights. Because of the way the system is hinged, as the arms unfold and cross each other the camera travels in a linear path.

So far so good, but the C-Pan Arm has two tricks up its sleeve that make the unit special: firstly, by a simple adjustment where the two arms pivot the motion can be changed from linear to concave or convex, so that rather than tracking along the subject you can curve around it. Secondly, by turning the whole unit through 90º you get a vertical rather than horizontal movement — it changes from clear slider to jib. Again the motion can be linear (straight up and down) or curved (up and over). You can also set it at any angle between 0º and 90º enabling you to create movements that would be hard to achieve on other systems.

Here is a clip from IBC 2016 which gives you a good idea of how it works:
https://www.youtube.com/watch?v=KMlFBKb8nbU

The unit is well-made with ball bearing joints on all the pivots. An arm attaches opposite the camera on to which you fit dumbbell weights to balance it. Setting it up is straightforward but it needs a solid tripod to mount it on — the unit weighs 11kg with all the supplied weights fitted. It is compact too, around 55cm length when folded. It needs the minimum of tools: a large Allen key is supplied to screw the unit to a tripod (standard 3/8” mount) and all the other adjustments are done with levers.

The manufacturer states it will take cameras up to 6kg (up to 8kg in horizontal mode). Although I have no reason to dispute this, I’ve only seen the C-Pan Arm pictured with DSLRs, and I think that is the market it is aimed at. Certainly for heavier camera you would need many more counterweights than supplied — I used all but two to balance a Black Magic Pocket Camera — and the camera platform to me seemed rather lightweight for any camera over 4kg.

Once the camera is attached and counterbalanced you need to level the unit using the two built-in level bubbles. On the supplied tripod this was a matter of adjusting the length of the tripod legs (this is likely to be the case for most users, you would need a fairly heavy duty levelling ball head for this sort of weight).

As long as the unit is balanced, movement is very smooth. Adjusting from linear to curved motion is also very straightforward. Particularly impressive are the up-and-over jib movements.

Once you start using the C-Pan you notice two things: firstly, curves are not truly circular - towards the outside of the circle the movement becomes parabolic, so this means your camera to subject distance will not remain constant. How important this is depends on what you are doing but in many cases it means that your subject will not remain in the centre of frame for all of the journey so the system favours subtle moments and/or a wide angle lens.

Secondly, there is not an obvious place to control and steer the movement — ending movements gently takes some practice. Although the movement is smooth there is no dampening or tension adjustment.

I didn’t have the space or the time to really get the best out of the C-Pan but here’s a very simple example of the outward curved vertical movement:

These limitations prevent it becoming a ‘must have’ item — for basic straight movements a simple slider is perhaps a better option — but it’s certainly well constructed, versatile, easily transportable and capable of making some exotic moments. Indeed, it is probably the simplest and cheapest way to make many of the moves its capable of. It would come into its own if you were shooting a whole range of product shots where you wanted to move around and over a series of static objects.

The price (without tripod) is a reasonable £1800 + VAT in the UK, around $2200 in the USA, which should make it an inexpensive hire item when you need to add those movements to static objects. Big thanks to Top-Teks for lending us the C-Pan Arm for review.