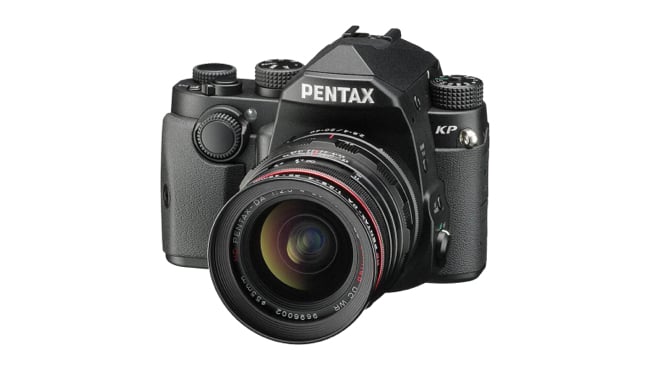 If you want a good yardstick for technological progress in cameras, their increasing capability in low light shows just how fast development is progressing. And while the Pentax KP might be limited on the video side compared to some of its peers, a 819200 ISO in a $1099 unit is astonishing.

Pentax has just released is $1099 US KP model touting a whopping 819200 ISO. Based around a 24.3 megapixel APS-C sensor (reportedly made by Sony), the camera offers a 5-axis on sensor stabilization system that sounds very much like the specs on Sony cameras. It accomplishes this shake reduction via a pixel shift technology which combines 4 images into one high resolution image. And it offers all of the usual features that one would expect in today’s mirrorless cameras—multiple autofocus and exposure tools, image effects, RAW, JPEG and 7 fps continuous shooting. The high ISO, though, is the most innovative feature. But aside from shooting on the dark side of the moon, high ISO ratings can be useful in terrestrial low-light situations and this increased sensitivity is becoming more common among today’s cameras.

The full-frame Sony A7S II held the ISO championship up to this point with its 409600 ISO rating. While obviously sacrificing noise for sensitivity, the A7S II opened new vistas for both still and video acquisition.

The Pentax does shoot video and it is here that many video shooters may welcome this nearly see-in-the-dark capability. The KP, however, only shoots MPEG-4 or H.264 video up to 1080/60i, with an option for 1080/30p. The only 4K mode is via interval shooting to create a UHD timelapse.

In contrast, the Sony A7S II resolves up to 3840x2160 UHD at 30fps in MPEG-4 or XAVC-S formats (XAVC-S being one of Sony’s proprietary implementations of H.264). Additionally, the Sony shoots straight Rec. 709, cine gammas and SLog3.

While the Sony A7S II might sport greater frame size and gamma options, the Pentax KP may prove to be the go-to popularly-priced low light camera for still and video shooters.