The GoPro Karma Grip reviewed: just what your GoPro needs? 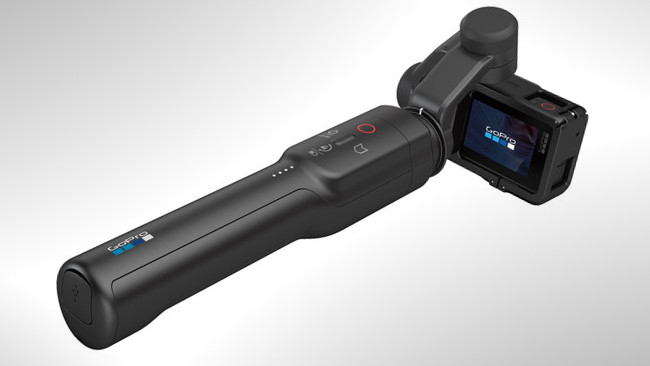 RedShark Review: Ned Soltz takes a close look at the new GoPro Karma Grip, which may just be an ideal complement to your GoPro.

GoPro suffered a significant disappointment with the problems associated with its Karma drone and subsequent product recall. But one component of that drone worked exceedingly well and has now become the basis of its $299 Karma Grip, a handheld stabilizer that perfectly complements your GoPro Hero5 Black, Hero4 and, later this year, Hero5 Session.

The stabilizer from the Karma drone combines with a grip handle to create a perfectly balanced, one pound (500g) handheld stabilizer with built-in battery that can power the GoPro for up to 1 hour 45 minutes, according to published tech specs. My experience with the Hero5 Black shooting Protune (GoPro's log) is a little over 90 minutes, making that estimate pretty accurate.

A built-in battery charges via a USB-C connector on the bottom of the handle, taking around 6 hours to charge from a USB source such as a computer or around 2 hours from an optional AC 'supercharger'. I was unable to determine whether the Karma Grip actually charged the GoPro battery, but the unit definitely does power the camera regardless of the charge status of the GoPro's battery.

Attaching the camera to the stabilizer couldn't be easier. For the Hero5 Black, simply remove the battery door on the camera and slide the camera into the mount which connects via the HDMI and USB-C ports. Then, simply lock the mount. The procedure will be identical for the other camera mounts. What is most noteworthy here is that, since the grip is designed specifically for the GoPro, no balancing of the camera is needed. I have used a variety of gimbals of various sizes on a range of cameras small-to-large. Balancing the camera is most definitely the first and often most time consuming step in stabilized shooting. In the case of the Karma Grip, just mount the camera and turn on the grip. It is fully balanced.

The Grip itself is nicely sealed and reputes to be water resistant. Even the four buttons are 'blister' type buttons with little possibility of moisture penetrating. Controls are simple. A Power/Mode button switches stabilizer and camera on-or-off. Once the camera and grip are live, that mode button will toggle through the various modes (video, still, etc) available to the camera. But, it cannot control any camera settings. This must be done via the touchscreen (Hero5 Black), menu system (Hero4) or on a smart device via the GoPro app. A shutter button starts-or-stops the camera, while the tilt lock button controls the tilt of the camera on the vertical axis only. There is no horizontal control, so this movement can only be accomplished by the operator.

The Hero5 Black camera has an option for in-camera electronic stabilization. This is automatically turned off when the camera senses it is connected to the Grip.

Shooting is as simple as pressing the shutter button and walking, skiing, running – any activity you would do with the GoPro.

Included with the kit is a mounting ring which attaches between the stabilizer and the handle. It has the standard GoPro mount and thus can be used on any GoPro or compatible attachment point. This allows unlimited options. Attach it to a car or motorcycle mount. Mount it to your helmet. The possibilities are only limited by whatever mount you have! I really could have used this shooting in an ATV in Alaska this past summer!

The Karma Grip is also supplied with a weather-resistant case which could also be used as a body mount for the grip with its mounting ring.

GoPro also plans to ship an optional extension cable to allow the stabilizer and handle to be separated. There are potential limitations to this, owing to the fact that the remote control is hardwired rather than wireless.

Regardless of how the grip is mounted or hand-carried, footage is extremely stable. There are other third party gimbals on the market in roughly the same price range which can also deliver smooth footage. But if you are only planning to use a handheld stabilizer for your GoPro, the Karma Grip represents the best option. Its complete integration with the camera and balance makes for ease of set up and ease of use. The fact that it powers the camera adds convenience.

The built-in battery could be a limitation for longer shots. It would have been so preferable for GoPro to have designed it with removable rechargeable batteries. Concerns can also be raised that motorized tilt is only available on the vertical axis. And the brushless motors are not totally quiet.

However, the advantages of the Karma Pro Grip far outweigh any minor negatives. It truly is the perfect complement for your GoPro to deliver smooth footage regardless of the shooting scenario.