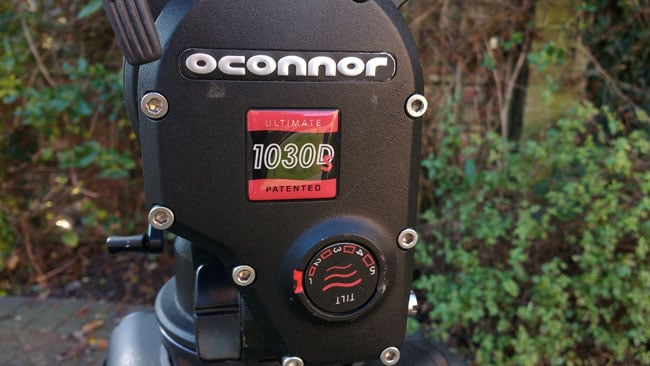 RedShark Review: A reader's comment on a previous tripod review led Phil Rhodes to examine the O'Connor 1030Ds, a high-end tripod that, while it might cost more than your camera, is a thing of wonder.

When we looked at a recent tripod release recently, it was suggested in the comments that a particular competing model represented an interesting alternative. Well, that's the sort of question we're here to answer, so here's our view of O'Connor's well-established 1030Ds fluid head on its 30L tripod.

At around £7500, the system of head and legs we're discussing, which we'll refer to as the 1030 for brevity, is at the upper end of the market. It's among the most capable of its broad type, in terms of sheer load-bearing capacity, and exists where the worlds of ENG tripods and feature film camera support meet.

We could call it an upscale EFP tripod, which means it'll often be used by people who do a bit of both drama and documentary. Putting this into perspective, to obtain even more capability, it'd be necessary to go to something like the mighty Ronford Baker Atlas 7, which really serves a rather different market of feature films (and the very highest-end single-camera drama) and is not really intended for the sort of single-operator situation that equipment such as the O'Connor 1030 series can handle. 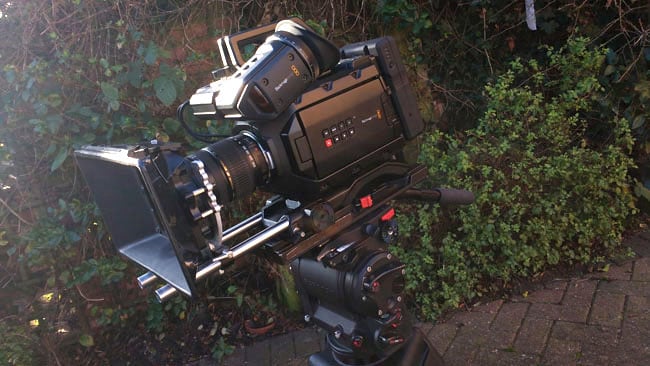 With film now a very small part of the market, though, and even very good cameras diminishing in size and weight, the O'Connor 1030Ds could probably handle very nearly anything. The Ds-suffix head, as supplied for review, is advertised as supporting cameras up to 41lb (18.6kg), while the 1030D handles rigs weighing 30lb (13.6kg). There are two subtleties here which are nice to see. First, O'Connor gives a distance associated with the weight specification. The 1030D supports those thirty pounds at anything up to a distance of six inches from the centre of gravity, for instance, and a table giving capacity figures versus centre of gravity offset is part of the specification.

An unusually tall, thin arrangement of camera equipment, with a centre of gravity more than six inches away from the base, might give somewhat unexpected results, since it would exert more leverage on the head when tilted away from the horizontal. It's a trivial thing, perhaps, but attention to detail is good.  The other difference between the D and Ds suffix is that the more heavy-duty head tilts to only plus-and-minus sixty degrees, whereas the 1030D will go all the way to vertical, at plus-or-minus ninety. This is, to be fair, probably not something which will bother anybody but airshow photographers.

Comparatively, the load limits of the 30L tripod are largely irrelevant – it will apparently support 205lb, meaning that many of us can happily attach a cushion to a 100mm ball mount and use it as a handy place to sit when it isn't in use. What's more important about legs is how easy they are to stow and deploy and O'Connor's performance is fine in this regard. There's a fairly conventional vertical toggle clamp for each stage. It's possibly slightly easier to open both stages at once with the horizontal design used by companies like Miller, which puts the two directly adjacent, but only trivially.

Carbon fibre is really almost essential on a two-stage tripod of this scale. The 1030Ds head is fractionally heavier than, say, a Miller ArrowX 7, but no camera support equipment at this level is or should be lightly built. The company would, I suspect, accept happily that the 1030Ds is designed for no compromise on solidity and that people looking for extreme portability will need to look elsewhere. Between the extensions and the spreader, the tripod itself deals with heights from 22 to 61.8 inches (56 to 157cm). 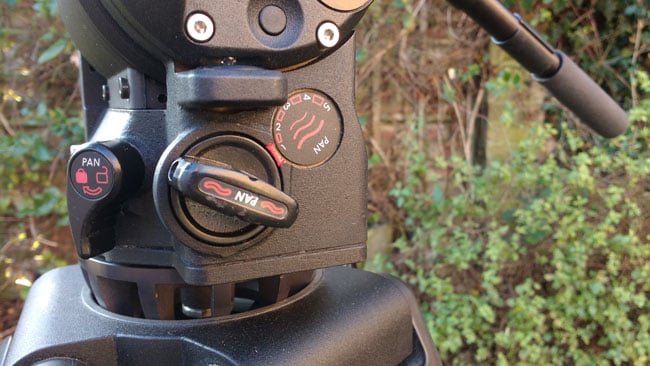 Pan and tilt locks are at the front and left respectively

So, those are the numbers. The things that really differentiate tripods are the ways in which they implement things like counterbalancing and drag. The pan-and-tilt drag is on two knobs, each of which rotates a few turns from end-to-end and has a numeric indication of the selected degree of resistance. The tilt lock is conventional and the pan lock appears at first to defy convention by appearing at the front left of the head. This seems counterintuitive until it becomes clear that the left, non-operating hand falls easily onto it in that position. The key nicety of the 1030 series heads, however, is the continuously-variable counterbalancing force, which is controlled by a little folding crank at the back. This facilitates fine control and is sturdily constructed – it folds out, provoking fears of flimsiness if it were plastic, but in metal it'd be very difficult to snap off.

The way in which the forward and rearward counterbalancing load changes with tilt angle is complex and almost infinitely variable, depending on the combination of weight and layout in the camera. A graph of the required force to precisely counterbalance a given load would describe a complicated curve. As such, it's effectively impossible for any tripod to achieve an absolutely perfect counterbalancing force; it's a complicated subject to talk about without meandering off into equations about spring rates. Suffice to say that O'Connor's implementation is very much as good as it should be in a high-end tripod and any errors are very small indeed, right down to very lightweight cameras requiring almost no counterbalancing at all.

O'Connor's 1030 series is not a budget-oriented option, but then neither was the Miller we looked at last time, at least within its intended market. In any case, in terms of price and loadbearing capacity, the O'Connor 1030Ds competes more with the Miller ArrowX 7, in any case, not the ArrowX 3 that we previously examined. The 1030 is not a tool for ENG camerawork or fast-paced documentary, as the ArrowX 3 is; it's too big and heavy, really, although it can, in extremis, fill the role. Build-wise, it's every bit as much of a well-made tool as it should be for the price. Whether it's worth paying that price for a head and legs, a price which will seem camera money to some people, depends on the anticipated workload. If you'll be able to take advantage of something that's clearly designed to be purchased once per career, well, it will certainly do that for you.