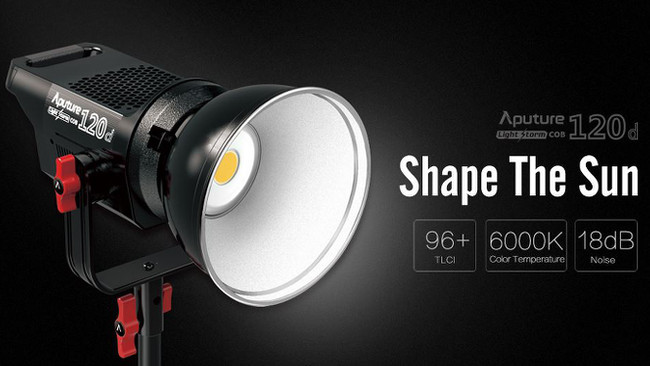 RedShark Review: the COB-120D open face daylight LED light by Aputure, which happily manages to avoid most of the flaws that often bedevil LED lights

Aputure's COB-120 series more-or-less marked a turning point in LED lighting technology. The first release, with T suffix, came out at a price which made a lot of people underestimate it, fearing flimsiness and the sort of problems with colour quality which bedevilled early LEDs. However, Aputure's light hit the market at just the right moment, with a ratio of price-to-build-quality that was very encouraging. We were impressed – very impressed, actually.

It was always fairly clear that the company would eventually release a daylight version of the COB-120T, although it's actually been a while in coming. Most of the considerations of the tungsten version apply identically here. Beyond colour temperature, the lights look and operate essentially identically, although there are a couple of subtleties. The daylight version pulls a bit more power and the controllers are, therefore, not compatible, though they behave identically from an operator's standpoint. The 120D is a little bit brighter.

As a lighting tool, an open-faced light such as the 120D is powerful because there are no optical components in the way, although unmodified it is a fairly blunt instrument. Trying to cut the beam with a flag is harder than it would be with a similarly-arranged fresnel, because much of the light's output comes from the reflector, creating a self-filled double shadow effect. The shadow quality is otherwise reasonably attractive and this is not specifically a criticism of Aputure's product. The same would be true of any open-faced light; such are the compromises of the arrangement. As such, the 120D is probably most suitable for deployment as a hard key or backlight.

The real flexibility comes from the compatibility with Bowens-mount accessories, of which a whole ecosystem exists. These accessories are principally built for the stills photography world and they're sometimes a little under-built for the sort of treatment they'd get on a lighting truck, but that also means they're lightweight and ideal for small crews and single operators. As we've discussed, things like barn doors don't work particularly well on an open-faced device, but umbrellas and softboxes are all very relevant. Possibly a panel light, like the company's own LS-1, makes slightly more sense if chosen specifically to drive diffusion, but the 120D will certainly do that if need be.

The key advantage of daylight lighting, though, is actually nothing to do with LEDs. It's a common factor which has always made expensive HMIs attractive and it's about flexibility. Converting daylight-to-tungsten with a full colour temperature orange filter is much less lossy than converting tungsten to daylight. Lee Filters' own site states that the transmission of a #201 Full CT Blue filter is 35%, whereas the transmission of a Full CT Orange filter is 62.8%. This matches expectations inasmuch as the conversion from daylight-to-tungsten loses about a stop (half) less light than the conversion from tungsten-to-daylight.

As such, the daylight version is very welcome and anyone without a clear imperative regarding which colour temperature to buy might be best advised to go for daylight. Of course, a one-hundred-watt LED is not a massively high-powered light in the context of common 575- and 2500-watt HMIs and it's unlikely to be used to fill daylight, other than in the most extreme circumstances. It wouldn't make sense to pick daylight where it would habitually be filtered to tungsten, but if there's an equal requirement for both, it would make more sense to start with daylight to begin with and achieve lower filtration losses.

Filtration matters (and a caveat)

All that said, a brief aside is necessary here. Almost no LED light has precise enough colorimetry to work well with CTO and CTB filters; this is the reason behind Lee's development of the specialist Zircon range of correction gels, which is intended to better suit the output of typical LEDs. Since there isn't any well-standardised output characteristic for what we refer to as daylight or tungsten LEDs, they do still exist, to some extent, outside the system of CTO and CTB filters that are designed to be used with more conventional light sources. This gap is narrowing and, presumably, LEDs will become more accurate over time, making conventional filtration will more reliable. Again, it is not a problem specific to any particular manufacturer. The Zircon orange filters are, based on a casual glance at a monitor, a bit better than conventional CTO at making the daylight COB-120 look like tungsten.

Probably the most common complaint that might be levelled at the COB-120 range is not one of performance, but one of simple features: they're not colour mixing lights. To get both tungsten and daylight, we need two and they can't be tweaked to match other lighting or practicals. However, colour mixing, at least accurate colour mixing, would make them much more expensive and probably less powerful. People for whom this is a concern may look towards comparable units such as Hive's recently-Kickstarted Wasp 100C, which offers colour mixing and a selection of lenses, though it illustrates the problem. It's almost twice the price, without Kickstarter discounts, and we don't know if its colour performance when emitting white will be as good. The compromises of bi-colour and colour-mixing lights compared with fixed-output equivalents is likely to be a key issue in the next year or two of LED lighting development.

To summarise, the COB-120D, like its tungsten-emitting brother, is a bright, efficient, roughly 100-watt open faced light with good colour quality for a reasonable price and which doesn't have any serious flaws. Flaws we look for in LED lighting include flimsiness, ugly output pattern, noisy cooling or excessive bulk, none of which are exhibited by the 120D. The multi-part power supply chain is about the only serious concern. On mains power, required equipment includes an IEC mains cable, a power supply with attached cable, the control box, the control box to lamp head cable and the lamp itself. While the strobe-style housing for the lamp is small, the rest of it feels slightly cluttery. It's not unusual to see COB-120s with the control box dangling from the handgrip on the back of the lamp head, which is fiddly and inconvenient. Still, at least they included a hanging strap so it can dangle from a C-stand instead.

In conclusion, it's very fine. That's not to say we don't want the 1K version (or at least the 575W), but for that we have to wait for fundamental advances in available technology.