A timelapse system that works unattended for months 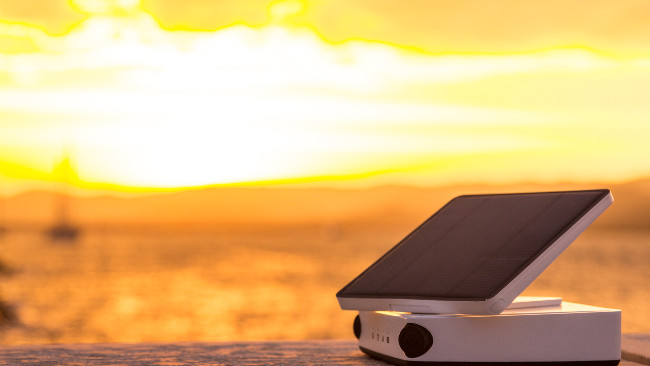 Enlaps, a small French company, is about to release the Tikee timelapse system. The Enlaps Tikee system started life as a Kickstarter campaign last year and is said to solve the main problems when capturing photos for a timelapse video: battery life and unattended use. The Tikee camera is a white plastic box (18cm square, 6cm height) equipped with a lens on two corners, a battery and a solar panel on top. Users can change the position of the panel for optimum results. The system depends on your smartphone or a web app to control the unit.

The Tikee comes with Bluetooth and WiFi and shoots in JPEG. The Tikee Pro also shoots in RAW, has a GPS and a 4G LTE modem. SD cards of up to 128GB are only needed as a backup medium, as all photos are transmitted to the cloud once they're captured. Units come with an extension port for additional sensors, which in the future should allow sensor-triggered timelapse photography as well.

The Tikee is capable of shooting unattended for months on end, Enlaps claims. It is built to manage its energy depending on available sunlight and transmit its images remotely. Its housing is designed for outdoor use and should be usable in all conditions, including snow. Left for days on its own, it's obvious there's nothing standing between a Tikee and a thief — if he recognises it as anything but a glorified sandwich box, that is — so the developers have included remote position tracking to protect against theft.

Shooting timelapses with the Tikee requires you to first pair the unit with your mobile device, choose a preset or define your own lapse setting and start capturing. While you control the unit with a smartphone or from the Enlaps web app, creating the actual video out of the images is done with the web app. You can automate this task, but you can also edit the results and share them directly or use the individual photos in your NLE.

The Tikee is expected to cost approx. €750, while the Tikee Pro will cost about €900. Both will be released soon.