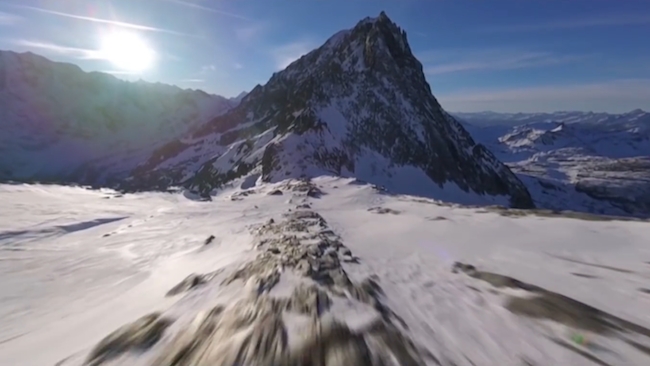 The footage below looks like it might have been taken with a drone equipped with a multi-axis gimbal. It is pretty impressive, flying as it does so close to the mountain ridge so accurately. Only this is no advanced drone, and it isn’t even an advanced camera.

It was shot using a GoPro Hero Session mounted onto a tiny FPV racer drone frame (a STRIX AWK210). At 210mm diameter, this really is small scale. Stabilisation was achieved in post using an After Effects plugin called ReelSteady. With a retail of $399 it isn’t cheap. But the results from it would appear to be very impressive.

We have covered the ReelSteady software and footage resulting from its use in the past. The software would appear to offer features far in advance of its rivals. The company is coy about exactly how the package is achieving the results that it does, but it would appear from what we have seen that somehow motion blur resulting from shake is being minimised, or even eliminated.

Previous advanced software stabilisation has achieved this by analysing preceding and advanced frames, and then combining information from them very cleverly. Nothing is perfect, though. It is possible to see the occasional glitch, as well as the ‘jello’ resulting from vibration. However such issues could be further cleared up using more post software. Of course using software such as ReelSteady also results in cropping taking place, losing you much of the original resolution.

Shooting 4K and outputting at 1080 would probably be okay, but I still feel that there is no substitute for getting it right in camera. The makers of the software also make no bones about the fact that it works best when there are no moving objects within the scene, which could limit what you can achieve with it.

At $399, you could also just as easily get hold of a GoPro sized gimbal for your drone, or for hand holding for a similar price. But having said that, it could still be useful for shaky helmet mounted shots. But would a hobbyist really want to shell out so much, especially considering that it requires After Effects as well?

So while ReelSteady is clearly very effective at what it does, a question mark still remains over whether hobbyists would pay that sort of money, and take the time to refine the footage using its many features, or indeed whether professionals, who are more than likely to have shot footage that is rock steady to begin with, would need it either?

But, while you ponder these questions, feast your eyes on another rather nice looking demonstration of its capabilities below.