Where the Panasonic GH5 excels: in detail 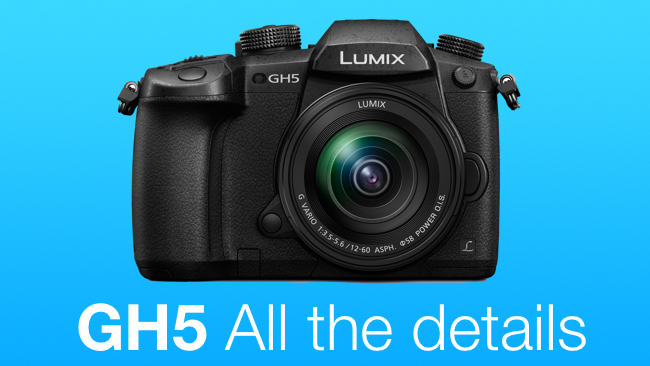 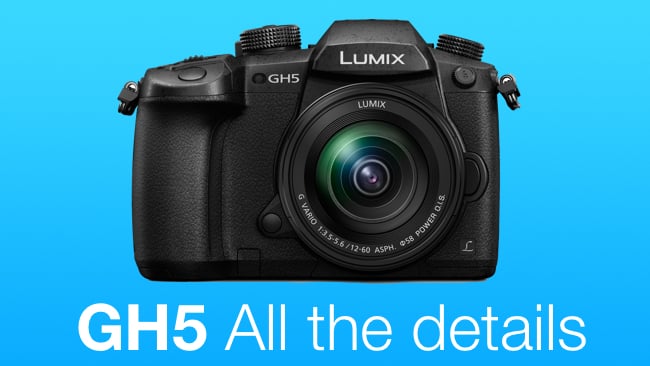 Panasonic's new GH5: A lot of progress in three years

The Panasonic GH5 represents a significant upgrade over the previous GH4, which is all the more impressive given that its very popular successor isn’t even three years old yet. Here, in detail, are all the upgrades and improvements.

[Check out Panasonic reveals the GH5: and it’s a stunner for all the news surrounding the new camera's unveiling.]

Here are detailed notes about the new GH5 and, where appropriate, comparisons with the GH4.

The Sensor is new. It's a "Digital Live" MOS 20.3 MP without a built-in low pass filter. Sensitivity remains ISO 200 to 25600. The combination of a 25% increase in resolution over the GH4's sensor, which was 16.05 MP, and the lack of an Optical Low Pas Filter (OLPF) should lead to significantly sharper images.

Readout speed is 1.66 times faster. This would hopefully lead to less rolling shutter.

The GH5’s autofocus uses"Advanced DFD", and takes less than 0.05 sec. This is an improvement over the GH4's 0.07 sec. DFD is “Depth From Defocus. We’ve seen it in action on the GH4 and it’s certainly effective.

In-body, 5 axis, equivalent to 5 stops. The GH4 had no In-body stabilisation. We were told that with the right lenses, the GH5's in-body stabilisation will co-ordinate with in-lens stabilisation, to give what we would imagine would be super-stability. We weren't able to quite get to the crux of how this works and of course it won't mean that body + lens stabilisation is twice as good as either on its own, but it's very good to know that at the very least, the two types of stabilisation won't interfere with each other.

This is a huge improvement over the Gh4.

I believe that Hybrid cameras, cameras which allow you to extract frames from video, or pseudo video, will grow into a very important new category. Or perhaps it will become standard on most cameras. RED already does it at the high-end. With 18MP stills available from the GH5, Panasonic can certainly claim to have this covered at the lower end.

As a footnote to this section, I suppose there’s nothing to stop you outputting thirty stills per second of "pseudo video” shot at 6K, one by one, and then importing them to a video timeline. It would be very laborious, but theoretically possible.

There's a maximum frame rate of 60p/50p in 4K resolution. This is recorded as HEVC (H.265). But at these frame rates recording is only 4:2:0 at 8-bit. 4K can be recorded at 30/25/20p with 10-bit resolution with H.264. The sensor is not cropped in any video mode and there is no line-skipping or pixel binning, so all video images are genuinely downsampled from the full resolution of the sensor.

In Full HD, the maximum frame rate is 180fps.

The maximum bitrate is 400 Mbit/s, available when shooting 4K

For external recorders and monitors, the GH5 has a full-sized HDMI port that can output 4:2:2 10 bit video while recording internally (but 4K 60p/50p can't be recorded while being output). It's great to see a manufacturer that's prepared to give full information about the output specifications. Often it's hard to find whether video outputs are eight or ten bit.

The GH5 is now freezeproof (within sensible limits!) as well as splash and dustproof.

Panasonic's video processing engine is called "Venus" and is improved in the GH5 (and across all Panasonic's cameras in the same generation we would assume). Recording codecs are described by Panasonic as being part of the Venus engine. The faster processor is what empowers the GH5 to record 4K 60p/50p without cropping and 30fps 6K photos. There are also some new digital methods to enhance images. (Note that when I say "enhance" in this context, I don't mean to magically improve pictures like in a science fiction movie, but to make a better effort to extract the real information that's captured raw by the sensor).

Each of these is very significant in my view and we'll look at them below under separate headings.

It's easy to forget that the sensors in single sensor cameras are monochrome. The only reason we can see colour from them is that they have a pattern of colour filters across the sensors. Software determines the colour as closely as possible by knowing about the filter pattern and by making assumptions based on the relative brightness of pixels under the filters. It's often called DeBayering, after the inventor of the technique. It's also called DeMosaicing.

Almost everything about a camera’s image depends on this, so it's understandable that Panasonic has been looking for ways to improve the process. And they really do seem to have improved it. What they've done is to increase the number of pixels that are fed into the calculation from a typical four, to a distinctly untypical nine. While the whole process is incredibly abstract, it's easy to see why this might give better pictures, and you have to wonder why it hasn't been done before. Well, it might have been, but it's not an area that manufacturers normally go into great detail about. Ultimately, it’s probably about how many complex calculations can be carried out in realtime.

In the examples and comparisons that we were shown, there was definitely more definition in areas of colour. We can't wait to see how this pans out in real-world use.

This appears to analyse the image and separate it into three categories: Flat, Detailed and Edge. We think this probably helps with noise reduction (it can be more aggressive in flat areas).  It also helps with edge definition, especially with aliasing, which is the problem you get when straight lines are close to either horizontal or vertical. We were shown examples that appeared to demonstrate this: jagged lines from GH4 images was distinctly smoother without the overall image loosing sharpness.

I'm not completely sure that I understand this but in Panasonic's own words: "The bright parts and the dark parts are separately reproduced by adopting colour control according to brightness".

What I think this means is that by processing colour and brightness separately, it's possible to make colours at different brightness levels more accurate. Panasonic suggests that this can help, for example, with skin tones.

This does make some sense but I would like to see a more detailed explanation of it.

Panasonic says it identifies and corrects noise with four times the resolution of previous processes. This suggests to me that noise calculations are carried out with two extra bits of resolution.

Recording is either or both of two SD cards. It's possible to record with two different codecs at once. Hot-swap continuous recording is also allowed.

There is no 29 minute restriction with the GH5 as there was with the previous GH4.

Vlog is an option with the GH5. It has to be bought directly from Panasonic.