Panasonic reveals the GH5: and it’s a stunner 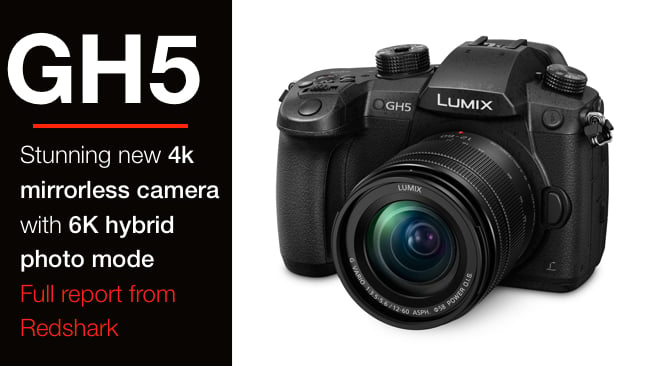 The $2000 Panasonic GH5, launched on Wednesday at CES, is a mirrorless interchangeable lens camera with 4K 60p/50p recording, and 4:2:2 10-bit shooting in 4K at up to 30p. With an additional 6K Photo Mode, it looks like an incredibly powerful all-rounder.

[For in-depth details on the new GH5, head to Where the Panasonic GH5 excels: in detail.]

The Panasonic GH series of cameras has always punched above its weight with video. I remember shooting with a GH2 while I was on holiday in Portugal in 2011, and feeling quite simply puzzled as to how such a small, pretty low-cost camera could shoot such great-looking HD video. I just revisited the footage today and it still looks fresh, sharp and colourful.

Since then, we've seen two more generations, the last of which, the GH4, was the first interchangeable lens Mirrorless camera to shoot 4K. The demo material shown at the time by Panasonic was jaw-dropping. Obviously shot with a very good telephoto lens, we saw wildlife footage that could have been from Planet Earth — at least on the consumer-quality monitors on an exhibition stand. It was clear that the GH4 was a video camera aimed at professionals wrapped in a still camera body. I know small production companies that have used nothing but the GH4 since it came out.

And now, today, Panasonic is revealing all the details about the GH4's successor, which, confirming our rather risky predictions from last year, will be called the GH5. (Very low marks to anyone who thought it was going to be called the GH4 Mk II.)

Panasonic describes its camera as a Hybrid. It's sweetest spot is where still and video photography intersect and anyone (like me!) who takes stills and video and who wants a small camera to take with them will gravitate towards the GH5. Interestingly, Panasonic sees the GH5 in a crossover position between the Cinema market (which calls for shallow depth of field, flexibility with lenses and 24p) and  Broadcast (which needs deep depth of field, zoom lenses and mobility).

We’re looking at the main improvements over the GH4 in a companion piece: Where the Panasonic GH5 excels: in detail, but suffice to say that with a new sensor, beefed up autofocus, 5-axis stabilisation, 60p/50p 4K video, the ability to shoot 6K "video" at up to 30fps in order to extract 18MP stills, a whole host of new improvements to the Venus video processing engine and more, this is one highly impressive upgrade.

No-one has a GH5 at the moment. This should change quickly and we will write in much more detail as soon as we get one.

My impression is that this is a significant upgrade over the GH4, which was already an impressive performer. The bottom line is that the images from this camera are amazing for the price, and, in the right circumstances, amazing at any price.

It's fascinating to see what's been achieved in as little as two years. And it's not going to stop there: Panasonic has already said that it is working on 8K cameras.

For production companies with smaller budgets, they'll be able to do great work with the GH5. A clean image is the starting point for post production on every scale, and that's what you get with this new camera. For almost every other class or category of video maker, there is a role for a GH5.

I think what Panasonic has achieved with this new device is something quite remarkable. It's not going to be a case of finding reasons to buy a GH5. You're going to have to find a reason not to, and that won't be easy.

[For in-depth details on the new GH5, head to Where the Panasonic GH5 excels: in detail.]