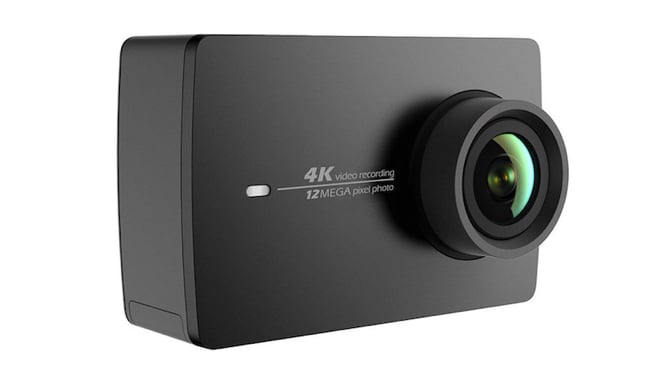 Chinese developer Yi Technologies has teased a new 4K action camera ahead of CES which it claims will be the first to shoot at 60 frames a second.

60fps is, of course, pretty useful to the sports video market where faster frame rates can make motion appear less blurred, while at the same time giving editors more options for slow motion.

Specifics of the Yi 4K+ are being kept under wraps until the show next week, but it’s a fair bet it will be near identical to Yi's 4K 30fps model which contained a Sony IMX337 sensor and squarely targets GoPro’s Hero 4.  That model, costing just $249, included a 2.19-inch display, two hours of battery life and the ability to stream video over WiFi.

The GoPro comparison is the company’s own. On release of the Yi 4K last summer it published a side by side spec sheet and YouTube video of footage shot with both cameras.

Indeed, Yi describes itself as a “challenger brand." In a press release for the 4K+, CEO Sean Da said: “CES 2017 is an important milestone for us as we look to demonstrate our full product line and reveal novelty solutions.”

For ‘novelty’, perhaps we should read ‘novel’. In November the company launched the mirrorless Yi M1 built around a Sony-designed 20MP four-thirds CMOS sensor with zoom and prime lens options, and the Yi Erida drone which will also be showcased at CES.

The drone can fly at 75mph and will support 4K — perhaps with the Yi 4K+ action cam. In addition, Yi also has a partnership with Google to develop a VR camera rig for its Jump platform, aping GoPro’s Odyssey VR rig.

Meanwhile, GoPro’s Hero5 Black version, launched in September (and reviewed here http://www.redsharknews.com/production/item/4215-gopro’s-hero5-black-advanced-controls-make-it-a-winner) currently supports 4K 30fps, so it would be reasonable to expect GoPro to be lining up higher frame rates in version 6.