Director's Notes: STUCK, made with Blender on a laptop 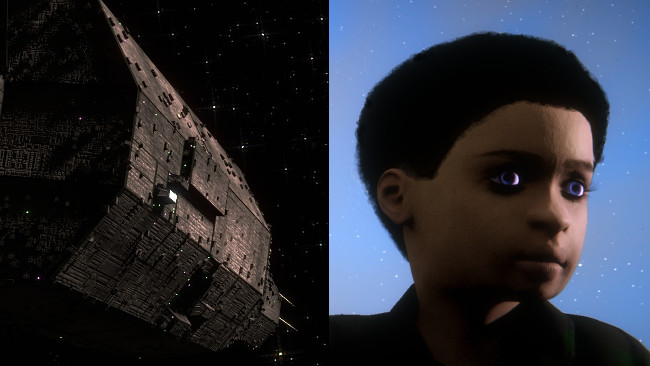 A composite of production stills from STUCK

A self-professed 'Blender 3D addict' of more than ten years chronicles his experience with the program while making his short STUCK. By Bernard Egreteau.

I remember my first time opening Blender: 10 minutes of total despair before I closed it out of frustration! I thought my intuition could overcome the complexity of its interface, as I usually did when trying some new software. For the first time in my life, my intuition was of no help.

I eventually found some YouTube tutorials for Blender. That's how I got into it: online tutorials and nothing else (but hours of practice). And let me tell you the range of topics issued about Blender on the web is massive, from basic modelisation to 3D printing, animating objects and characters, compositing, materials, rendering engines, texturing, match-moving or motion tracking and so on. Each one of these topics can be approached in several different ways, technically speaking, which makes it even more complex and interesting, but sometimes quite discouraging as well.

In 2016, the Blender community has grown stronger and bigger. It now has its own international professional network, a huge team of developers and so many great productions which you can easily find online.

But these are team works, mostly, requiring a fair mount of calculating power. In the case of my short opening movie sequence called STUCK, I'm alone and just doing everything by myself on one computer. Being a musician, a composer and a recording engineer, I know now that the difference between processing music and processing 3D data is huge. With music, you just record your tracks on top of each other, edit your stuff, work on the mix and then export the whole composite into one audio file. This final step is important, because with music it'll take at most one minute to get a three-or-four minute track, even with a low-end soundcard. With Blender, if your scene is loaded full of objects, motion and image or video textures, such as in STUCK's flyover city scene, exporting a four minute video can take a month of uninterrupted processing, time during which you will probably not be able to use your computer without crashing Blender...And only then, can you edit your strips and add sounds in the video editor.

My laptop is a two year old 8GB RAM memory (Windows 7) with a graphics card GT Force GT 740M, by the way.

I figured I could do some watchable stuff with Blender, even though not perfect, and decided to project myself into planning 'movie-like' videos. I love movies! I've also recently grown a severe addiction to US television shows since I find a lot of them, especially during that last decade,  are so well-written. The recent Westworld series would be  the best example of what high quality screen-writing is to me.

I came to a point where I had to dig further into story-writing theory in order to make a proper use of my musical and 3D skills.

It took me a bit of time before I could come up with some workable screenplay.  I have this conviction that screenplaying is the «pivot point» to everything in movie-video production. This doesn't mean you have to start with that though!

In the case of STUCK's opening scene, I started to build up the scene without any preconceived idea of a story. You can begin to build a story out of a music, an image or even better: a 3D image you can travel into. It's fine as long as you get all the pieces of your story together soon enough before shooting. Having your 3D scene ready allows you to take stills and thus prep your storyboard without drawing, which can be a time-saver for all of those like me who are lousy drawers!

The character in the scene was made with another free 3D awesome software called Makehuman; its exchange format for Blender makes it easy to import and animate. Even better: there are now online librairies of Motion capture files for human skeletons you can download for free and apply to your Makehuman characters instantly, using an add-on called 'makewalk' – very useful for pre-animation and quite easy to edit for the purpose of the story. I forgot to mention that Blender itself doesn't do that if you don't download, copy, paste and enable this add-on. Blender's add-ons list is now quite impressive, but some of them are not yet integrated.

To conclude, I would very much like to build up a time-machine in order to practice 3D animation in the year 2050, using quantum computers loaded with graphic memory and an unimaginably evolved Blender.

But, let's not get ahead of ourselves!

Check out stills from STUCK on Page Two!